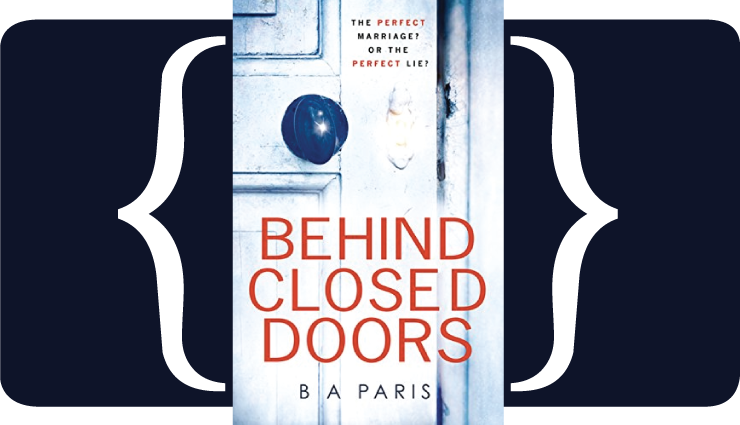 An August pick on Indie Next and LibraryReads lists, and a runaway UK debut bestseller, Behind Closed Doors * by B.A. Paris is one of the most terrifying psychological thriller you are likely to come across.

London attorney Jack Angel - movie-star-handsome and successful, sweeps Grace Harrington off her feet when he offers to dance with Millie, Grace's Down-syndrome younger sister under her care. The first sign that things are not what they seem to be is when Millie tumbles down a flight of stairs on their wedding day. On their honeymoon, Jack made clear his psychopathic plans, using Millie as leverage to ensure Grace's cooperation.

"Debut-novelist Paris adroitly toggles between the recent past and the present in building the suspense of Grace’s increasingly unbearable situation, as time becomes critical and her possible solutions narrow. This is one readers won’t be able to put down." (Booklist)

All the Missing Girls * , the first adult title by YA author Megan Miranda, is about the disappearances of two young women a decade apart. It has been 10 years since Nic(olette) Farrell left Cooley Ridge after her best friend, Corinne Prescott, disappeared without a trace. Now a cryptic note from her dementia-ravaged father brings her home. Within days of her arrival, her young neighbor Annaleise Carter disappears, reawakening the decade-old investigation that focused on Nic, her brother Daniel, boyfriend Tyler, and Corinne's boyfriend Jackson.

Told backwards from Day 15 to Day 1 since Annaleise's disappearance, Nic works to unravel the shocking truth about her friends, her family, and ultimately, herself. "Miranda convincingly conjures a haunted setting that serves as a character in its own right, but what really makes this roller-coaster so memorable is her inspired use of reverse chronology, so that each chapter steps further back in time, dramatically shifting the reader’s perspective." (Publishers Weekly)

Reclusive novelist Linda Conrads hasn't left her home since she discovered her sister's body 11 years earlier. When she sees the face of the murderer on television, the same face that she saw leaving the crime scene, she goes about setting a trap by crafting her next thriller utilizing all the details of her sister's murder. But her careful plan goes horribly awry.

Sounds great. I'll put it on

Sounds great. I'll put it on my reading list.
TBB

Thank you for your fab

Thank you for your fab reviews, Muffy. I am adding to my read list right now...