Encore Theatre's production of "West Side Story" is unnervingly timely 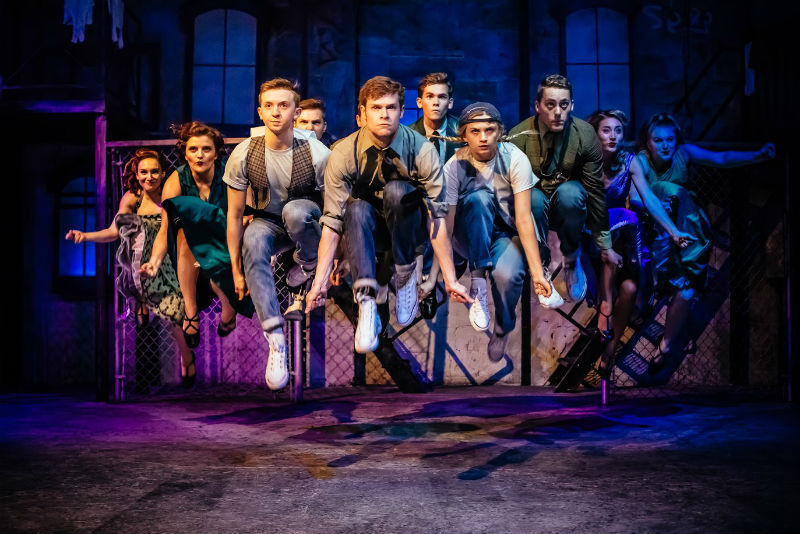 Not all that long ago, West Side Story seemed kind of quaint.

We’d all watch this classic, 1950s stage musical twist on Romeo and Juliet, built on the talent of four iconic artists (Jerome Robbins, concept; Arthur Laurents, book; Leonard Bernstein, music; Stephen Sondheim, lyrics), and think, “So many of the characters in this story are openly, unapologetically racist and anti-immigrant! I’m so glad we’ve evolved from this.”

Cut to the recent travel ban; and campaign promises about building a wall between the U.S. and Mexico; and white supremacists proudly marching in Charlottesville last summer; and the U.S.’s short-lived, limited aid for American citizens living in Puerto Rico, following Hurricane Maria last fall; and the children of detained migrant families being separated from their parents.

So “West Side Story” -- playing through August 12 at Dexter’s Encore Theatre -- which had always felt a little dated to me, seems almost unnervingly timely now.

Set on Manhattan’s Upper West Side in the 1950s -- a time when the area was populated by a blue-collar mix of ethnicities -- the show tells the story of a white gang, the Jets, and a Puerto Rican gang, the Sharks, battling to claim the streets. When Maria (Aurora Penepacker), the sister of Sharks’ leader Bernardo (Eric Rivas), and Tony (Conor Jordan), a former Jet, meet and fall in love at a local dance, they try to keep their affair under wraps. But then tensions between the gangs escalate and violence breaks out, testing Maria and Tony’s loyalty to their families, their friends, and each other.

Encore’s production inevitably stirs up the sadness of our country’s current-events reality with the joys of the show’s starry-eyed romantic spirit and distinctively athletic, sharp-edged choreography (thrillingly designed by Matthew Brennan). Encore co-founder Dan Cooney -- who’s performed on Broadway, and who now works as head of the musical theater department at Chicago’s Roosevelt University -- directed the company’s two-and-a-half-hour Story, and for the cause, he appears to have drafted a lot of young talent from his current workplace.

This is largely why Encore’s West achieves the formidable feat of having age- and ethnically appropriate young performers who have the musical chops to execute their roles. The vocals are polished, making some of the most challenging melodies seem effortless, and the dance numbers are often electric and dazzling (when they’re not quietly powerful in their restraint).

That said, the one qualm I had about Encore’s production involves its somewhat muted emotional thrust. The young leads hit their marks and nailed their notes and steps, but I neither felt swept up in their romance nor did I feel gutted by the show’s tragic ending. Yes, Penepacker’s feral cry (“Don’t touch him!”) in the final scene was affecting, but much of what led us there was less so. Her rendition of “I Feel Pretty” and Jordan’s “Maria,” for example, both sounded lovely, but they didn’t palpably convey the blissed-out euphoria of new love.

Even so, Story is one of the most ambitious and technically impressive productions yet mounted by Encore, with plenty of goosebump moments to be had, including Jordan’s achingly hopeful “Something’s Coming”; the exhilarating ensemble number at the dance, “Mambo”; the magical threading together of story elements in “Tonight”; and an ethereal ballet that offers an idyllic alternative ending (“Somewhere,” beautifully sung by Emily Hadick). Brennan’s high-energy choreography, paired with Tyler Driskill’s sure-handed music direction, bring down the house more than once.

Dustin D. Miller’s lighting is exquisitely detailed, using spotlights and color to give more texture to key moments, and Sarah Tanner’s brilliant set design -- which employs a backdrop of apartment windows at various levels (which Miller often illuminates from behind), along with fire escapes and some chain link fencing -- puts us squarely in the city while also allowing Encore’s performers to make the most of the theater’s small space. Finally, Sharon Larkey Urick dresses the Puerto Rican cohort in fiery warm tones, while the Jets (and their girlfriends) sport cooler tones; and styling details (like T-shirts tucked into belted jeans and rolled up sleeves) subtly suggest the mid-century without getting too literal or fussy about it.

When you think about it, West Side Story likely ranks among the all-time greatest works of art made in this country, but because it requires a large cast -- which makes it really expensive to produce -- productions of it are increasingly hard to come by. So perhaps it’s no surprise that when I attended Encore’s opening night performance on Friday night, the audience nearly screamed itself hoarse after each and every number. There’s a visceral joy that comes with hearing these songs we know performed live, just a few feet away from us, with all the high kicks, swagger, and leaps we’ve come to associate with them.

Yes, I wanted to feel a bit more than that, but more broadly, there’s no denying that with West Side Story, Encore -- having grown artistically by leaps and bounds since its modest launch almost a decade ago -- makes me believe, whenever I’m headed to Dexter to see a show, that “something’s comin’, something good.”

Need to support a lot for…

Need to support a lot for music theaters since such stories reach people effectively than movies.

This is one of my favorite…

This is one of my favorite productions! Can't wait to see it. However, I am disturbed by the irony of the headline and tone of this article, which makes sweeping generalizations about "All Those Bad People Out There" (i.e. people who voted differently than us...all those scary meanies!) This is so boring and lacks any nuance and represents a very limited view of the world. Stop the hysteria, stop the TDS, and then we can unite and actually create lasting change and profound peace. Like so many others, I am tired of creating a reality where all the bad things in this world only came about with the current administration.