Singing and dancing through Ann Arbor the Morris way 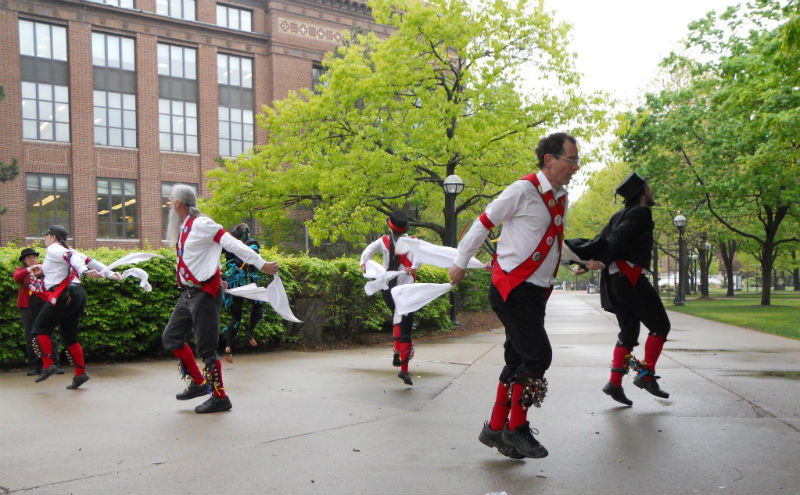 While the exact origins of Morris dancing are not clear, historians do know that people have been participating in this lively step dance for centuries. Shakespeare mentioned it in his plays. Peasants enjoyed it along with their summertime ales in the 1600s. The first known written reference dates to 1448 when Goldsmiths’ Company in London paid seven shillings to Morris dancers for a performance.

And in the Ann Arbor area, dancers have gathered since 1976 to engage in this energetic form of folk dancing. Ann Arbor Morris dancer Carol Mohr enjoyed international folk dancing and fell in love with Morris in the late 1970s.

“Back then there was a big folk music festival in Toronto," she says. "The Ark sold tickets and the folk musicians would perform there for entire weekends. One time I heard Tony Barrand, a British expat folk musician, and his signing partner perform. Tony had gotten hit hard by the Morris dancing bug and he put on workshops all over the country. He went around proselytizing Morris dancing and pretty soon Morris started popping up at folk festivals everywhere.”

While the baby-boom generation embraced Morris dancing, it dates to the late 19th century in America. Musicians published sheet music for dancing in the late 19th and early 20th century. Articles appeared in #Harper’s Magazine# and #The Nation# in the early 1900s. In 1910, the H.W. Gray Company published a book called #The Morris Dance: Descriptions of Eleven Dances As Performed by the Morris Men of England#. Around the time of this publication, a group called the Playground Association of America began encouraging folk dance as a way to fill “a social and developmental void caused by the rapid pace of the modern world.” Fans also advocated dance as a stress reliever for working women in the city. Then in 1914 a man named Cecil Sharp, then chair of the English Folk Dance Society, arrived in America. He is credited with popularizing folk dances such as Morris dancing in this country. Since then people have donned bells and picked up handkerchiefs to enjoy the rhythmic stepping of Morris dancing. 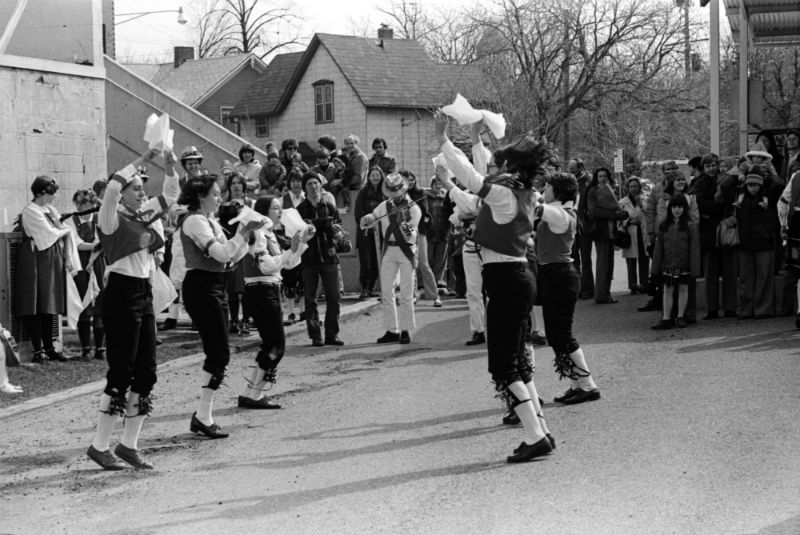 Morris dancers entertained crowds at the Farmers' Market and the University of Michigan Diagonal. Photo by Jack Stubb in The Ann Arbor News, April 10, 1978.

In addition to dancing, many in the Morris dancing community enjoy group singing. “At most gatherings,” Mohr says. “People sing the songs that have surrounded folk dancing for years. The two go together because they are both folk traditions and there’s a lot of overlap of Morris dancers and folk music enthusiasts.”

In 2010, the organizers of the Dawn Dance (an annual dance featuring a variety of dances from square to swing) asked the local Morris dancers if they’d like to host a pub sing. Mohr remembers, “We immediately agreed and had such a great time that we didn’t want to stop after our hour was up!” The group adjourned to Connor O’Neil’s pub and continued harmonizing.

“Since then we’ve moved to another location, but the main idea is the same -- the event is free and open to everyone,” Mohr says. “Attendees are welcome to lead a song or just sing along and no prior singing experience is required. We sing songs that have easy choruses to learn -- sea shanties, folk songs, traditional drinking songs."

There’s no set program or lyric sheets. “We don’t want people looking down at lyrics,” Mohr explains. “We want you to look up and listen to everyone. The song leaders will sing verses and the rest of us harmonize on the chorus which we will teach if they aren’t easily learned.”

Mohr, a musician, shares that the thing she loves most is singing in harmony with other people. “When you have a whole room singing a chorus in harmony … it’s the most exciting thing in the world to me!”

Morris dancers gather on Sunday evenings from 6 pm-8 pm at Gretchen’s House Childcare Center, 1580 Dhu Varren Road in the winter and on U-M’s main campus in the summer. The Pub Sing happens every second Tuesday at 7 pm in the Gulo Room at Wolverine State Brewing Company at 2019 W. Stadium Blvd. Visit the Ann Arbor Morris Facebook page or email a2morris@umich.edu for more info.

Thanks for this wonderful…

Thanks for this wonderful piece! As far as I’m concerned, Morris is still great for filling that social and developmental void and relieving work-related stress!! I want to add a couple notes by way of giving credit where due. First, Tony Barrand’s singing partner was John Roberts, who also played the music for Tony’s dance workshops. Second, although Tony was a huge part of my own introduction to Morris, and supported the inception of many US teams, the Ann Arbor team actually began as an offshoot of the (late, great) Ann Arbor Medieval Festival. Professor Tom Taylor taught Morris dancing here as part of the festival and independently a few years before 1976.
-Carol

You are more than welcome! I…

You are more than welcome! I will definitely be at a Pub Sing soon! :)