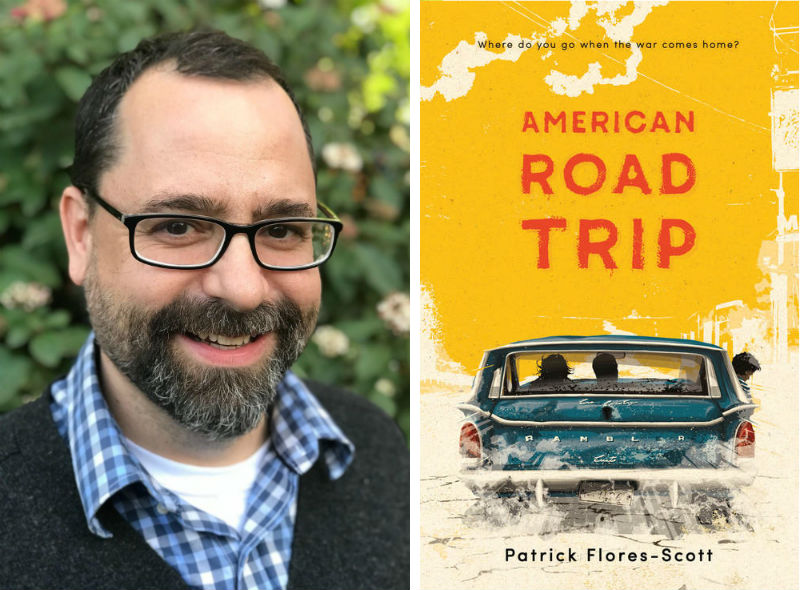 Ever wanted to get in your car and take off across the country? Who among us has not sat behind the wheel of the car and contemplated going instead of east into the sunrise instead of west into the office, going on a grand adventure? But what if you had to go on a road trip -- to save your brothers, save your family?

That’s the dilemma facing the Avila family in Patrick Flores-Scott’s latest book, American Road Trip. While life looks good for Teodoro “T," things aren’t so promising for older brother Manny, a soldier just home from Iraq with overwhelming PTSD. To save them all, their sister Xochitl takes the brothers on an epic road trip where the siblings deal with everything from socioeconomic pressures to first love to mental health issues plaguing our veterans.

Flores-Scott, an Ann Arbor native, was inspired to create a character who was a veteran with PTSD after hearing a story on National Public Radio.

“I started hearing NPR stories about families who had loved ones returning from Afghanistan and Iraq," he says. "One, in particular, was about a vet who had taken his own life. His mother read his suicide note in that story. It hit me really hard and I started wanting to explore that story, as well.  Soon after I watched a short documentary on HBO called Poster Girl, about a young vet who returned from Iraq with severe PTSD. She was full of raw emotion and struggle and she talked so openly about her experiences and her disappointment and trauma and guilt.” This woman and the veterans who cared for her inspired the character of the siblings’ uncle, who takes Manny under his wing.

Flores-Scott started the book in 2009, wanting to tell the story of a teen and his family as they dealt with job loss and foreclosure during a recession. At the time, the author taught middle school in a town just outside of Seattle, Washington, and that experience influenced his writing about the economic issues faced by the Avila family.

“When the recession hit, and families’ lives were being turned upside-down, I started wondering how kids succeed when their home lives are in chaos," he says. "As a teacher who has had to go to work while dealing with a mountain of my own grief, I know how hard it is to focus on the job at hand. I’m an adult with coping mechanisms in place. And still, it was impossible to do my job well under those circumstances. Even with that perspective, I know there are times in my teaching career where I judged kids for their lack of focus, or lack of homework, or because they were acting out … when really they were just dealing with a bunch of overwhelming stuff that made being a student near impossible.”

Flores-Scott explored the issues faced by his former students in both American Road Trip and Jumped In, his well-received debut novel, which was named to the 2014 YALSA Best Fiction for Young Adults list, a Walden Award finalist, a Washington Book Award winner, an NCSS/CBC Notable Book for the Social Studies, and a Bank Street College Best Books of 2014.

Both books give voices to characters who don’t get heard enough. This diversity is important to Flores-Scott for many reasons, he says:

Fiction can play a huge role in developing empathy. We are a diverse country and there are forces at work attempting to use our diversity to divide us. Empathy is the antidote to these forces of division. But fiction as a teacher of empathy will only succeed the way we need it to if readers read stories that put them in contact with characters that span the full cultural spectrum. Knowledge of history is equally important. … Fiction can reveal complexity that gets us closer to truth. And a functioning democracy demands we all have easy access to the truth of our past. In order to get closer to the truth -- to the fullest possible story of who we are -- we need all voices to be heard and stories that represent all of us.

Students of all backgrounds can find some of themselves in the story of the Avila siblings, whether their families are welcoming home relatives who served in the military, are rebuilding lives after the economic crisis, or just are trying to find themselves in a chaotic world. Flores-Scott sums up the road trip as “the perfect metaphor for folks in search of a new way of being after watching their old lives disappear in the rearview mirror. "

American Road Trip is a…

American Road Trip is a wonderful new book and it's great that you have called attention to it here. Both novels by Flores-Scott are lively and touching reads for young adults and adults, alike.