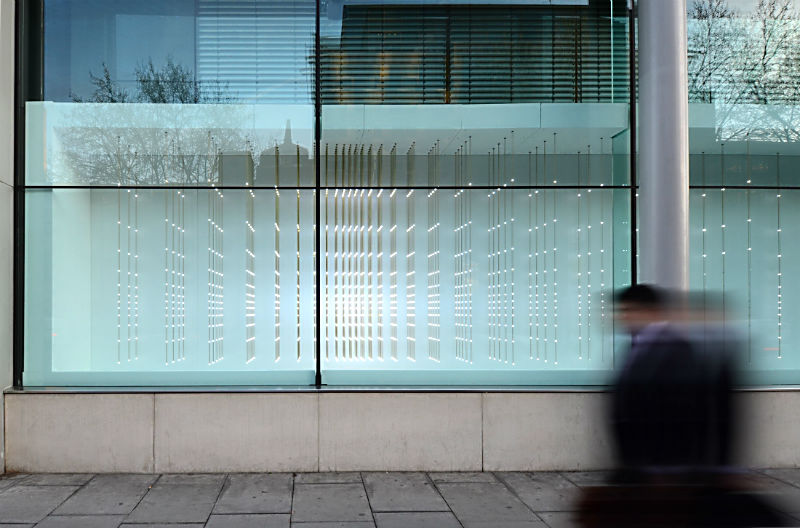 Random International's Swarm Study/II, on loan from by the Maxine and Stuart Frankel Foundation for Art.

This 2011 site-specific installation on display in the University of Michigan Museum of Art’s Irving Stenn Jr. Family Project Gallery, mounted through the courtesy of the Maxine and Stewart Frankel Foundation for Art, is held in conjunction with the museum’s Victors for Art: Michigan’s Alumni Collectors -- Part II: Abstraction exhibition.

The installation -- crafted by the London/Berlin-based Random International group that specializes in such site-specific installations -- has been designed to bridge the gap between human interaction and scientific technology. It's comprised of dozens of small dual-stranded LED lights set vertically in eight rows stretching across 32 multi-layered waves that blink horizontally to and fro across the length of the gallery.

Eno says in his original liner notes of the 1975 ambient album that he was given a classical harp music recording by a friend after he was hospitalized following a minor traffic accident. Confined to bed, “with some considerable difficulty, I put on the record on a stereo" in his hospital room, Eno wrote.

Adding to this awkward situation, Eno adds, “Having laid down, I realized that the amplifier was set at an extremely low level, and that one channel of the stereo had failed completely. Since I hadn’t the energy to get up and improve matters, the record played on almost inaudibly. This presented what was for me a new way of listening to music -- as part of the ambiance of the environment just as the colour of the light and the sound of the rain were parts of that ambiance.”

Reflecting on the phenomena of such a repetitious patterning of music, Eno set to work on the technological challenge of crafting ambient music: “The key figuration here is the long delay echo system with which I have experimented since I became aware of the musical possibilities of tape recorders in 1964. Having set up this apparatus, my degree of participation in what it subsequently did was limited to (a) providing an input of two simple and mutually compatible melodic lines of different duration stored on a digital recall system and (b) occasionally altering the timbre of the synthesizer’s output by means of a graphic equalizer.”

Granted, these art forms are different in many differing ways -- sight and sound being the least of these issues. Yet this particular creation of 1970s music and this 21st-century installation are not so dissimilar in other post-modern ways.

“Discreet Music” is ostensibly passive with its variability embedded in its computer program while Swarm Study/II is interactive in that its program engages its viewer through its variability. But both creations are digitally manipulated arts whose application is meant to be secondary to their reception. Such an extraordinary mechanically produced aesthetic would have been hardly imagined in the prior period of modernism -- much less in earlier arts.

Swarm Study/II differs, of course, in the sense that its algorithmic program is triggered by its audience whereas Eno’s program that is set in such a manner as to be self-regulating. But quoting the turn-of-the-20th-century French avant-garde composer Erik Satie, Eno notes that his ambient music (like Satie’s earlier musical efforts) is meant to “mingle with the sound of knives and forks at dinner” to create a sound that settles in its environment. Just as Swarm Study/II has settled in its environment.

After repeated observation, I’ve noticed it’s the very rare passer who actually stops to study the restless transition of Swarm Study/II's light patterns. Rather, like the intent of “Discreet Music” to be sonic wallpaper accompanying other activities, Swarm Study/II is visual wallpaper tracing the patterns of pedestrians walking in front of the U-M Museum of Art.

All of which tells us a lot about the contemporary interface of art, technology, and human activity because the flickering horizontal and vertical flashings of Swarm Study/II is actually quite arresting as a light show in its own right. These lights comprise a faux aurora borealis whose temporal demeanor would most certainly be striking enough to raise conscious awareness if the viewer actually attended to it.

Yet perhaps its relative ubiquity is yet another subtle dimension of Random International’s intent. As an electronic-based probe of the activity taking place around it, Swarm Study/II is not unlike other security devices that surround us through our daily affairs. We’re all obviously now encircled by surveillance observational electronic equipment almost all the time. It may be that Swarm Study/II is merely more charmingly upfront about its artful purpose.

The irony, perhaps, is that in an earlier day -- and in certainly another cultural context -- the very discrete twinkling of Swarm Study/II's lights in a more traditional or conventional setting like a gallery space inside a museum or gallery, would garner considerable interest.

Yet attention might undermine the purpose of the installation’s purpose. As it stands, Swarm Study/II” is a silent sentinel restlessly monitoring its environment. And it reports its observation only to him or her who pauses long enough to read its LED monitor. So it’s certainly no waste of time or space for you to follow it as much as it follows you.