Forever Red: How an Englishman in Michigan sustained his Manchester United fandom 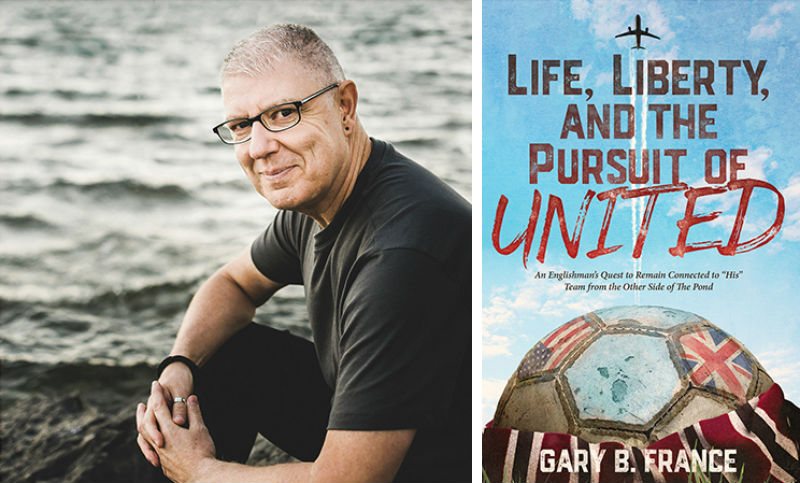 And then you move to a place where that sport is not only not revered but is called by the wrong name.

That’s what happened to Gary B. France 23 years ago when his physiotherapist job brought him from Lancashire, England, to southeast Michigan. He found himself starved for information on soccer (football) in general -- and more specifically, Manchester United, aka The Red Devils, aka The Reds.

“We are so used to 24/7 coverage these days that we might not remember that there wasn’t much back in the '90s," France says. "All I had was my own passion and the drive to remain connected to the sport.”

In those days France got his sports fix during transatlantic calls to his father and from two-week-old British newspapers that he found in the Little Professor bookstore in Dearborn. By chance, he found an old shortwave radio and got BBC World Service, which gave coverage of the second half of one game once a week on Saturday mornings. “I just had to hope it was my team!” laughs France.

Then one day, the man who hired France to come work in the United States handed him a newspaper clipping that announced weekly live showings of soccer games. “I got out my map of Detroit, headed up to Warren, and walked into this building where a bunch of people were gathered,” France says. The man who ran the event purchased a package for his satellite and viewers paid a fee at the door. France handed over his money and “instinctively sat down at this one table with two other guys. I knew then and there that I had found my tribe.”

At the time, France says this British social club was the only place to watch live soccer games in the area. “People drove from Wisconsin, Illinois … the gentlemen at my table were from Ann Arbor. Through the passion for that game, I met more and more people, including Jon [Wilson, the owner of Fish Out of Water Books].”

This passion and sense of community are what drove France to write Life, Liberty, and the Pursuit of United (Fish Out of Water Books)," his tale about the 1990s and early 2000s soccer underground that banded together in Michigan.

“The fans had a lot of stories to tell and I decided to put pen to paper and tell them," France says. "I did a lot of background work checking publishers and learning how to promote my own manuscript. I put together about 90 manuscripts, drove to a 24-hour post office, and sent them off.”

He completed the first draft of the book in 2001, but after not getting any offers to publish, France put the project on the backburner. But then something happened in this former British colony: Americans began watching soccer more and more. “When soccer started to explode over here, I pulled the book back up and soon got in touch with Jon,” France says.

The friendship that began over a shared love of soccer led to the publication of Life, Liberty, and the Pursuit of United in March, which he'll read from on Friday, July 27, at 7 pm at Nicola’s Books, which is the day before the International Championship Cup game at The Big House: Manchester United vs. Liverpool.

“Even though Gary and I grew up fairly close to one another in northwest England," Wilson says, "we first met 3,500 miles from home and became friends through our shared passion for the Reds [Manchester United]. When I told Gary that I was starting a publishing company, he replied, ‘Mate, you and I have got to talk!’ And the rest, as they say, is history! It’s been a total labor of love working with Gary on this book and reliving such great memories!”

While American viewership has increased in the past few years, the sport has not yet been embraced as enthusiastically as others. France suggests some reasons for this.

“The NFL is a behemoth marketing machine,” he says. “There is so much money tied up with the big four sports that make up American society that getting a foothold is difficult. From a commercial point of view, it doesn’t lend itself to sponsorship or commercial breaks -- you have 45 minutes of concentration once the game kicks off. The low scoring games may also turn some folks away.”

But as France points out, there are many positives to the game. “It is much more inclusive to all people -- boys and girls play, it is much more affordable, you can get started playing with just a soccer ball.”

France points to increased viewership of the World Cup, especially the Women’s World Cup. “Those images from the '90s of Brandi Chastain … those stick around in people’s heads. These moments all add up to captivate new fans.”

The passion and love for the game led France from standing in the garden with his shortwave radio trying to get a signal to driving to a little club in the northern suburbs of Detroit to writing and publishing a book.

“When it’s in your blood it’s in your blood," France says. "'The Beautiful Game' played by teams steeped in history, and for most of us starved of that fix back in the day, we would do anything we could to see live pictures of our teams -- to watch matches from the homeland we left behind. Not only us European immigrants though, but Americans and nationals from a whole host of countries, all so passionate about remaining connected with our teams."

Gary B. France reads from "Life, Liberty, and the Pursuit of United" on Friday, July 27 at 7 pm at Nicola’s Books, 2513 Jackson Ave., Ann Arbor. This event is a warm-up for the July 28 International Championship Cup game at The Big House: Manchester United vs. Liverpool.