Looking Back curator Jessica Hahn says fashion "is often a catalyst for the economy and the political situation of the times."

The idea that fashion is cyclical, and that “certain silhouettes repeat themselves with minor changes,” is not a new one. It is, however, an interesting starting point for thinking about articles of clothing throughout 20th century in America.

The exhibit Looking Back: 20th Century Dress From the Historic Costume Collection, curated by Jessica Hahn, can be seen at the Duderstadt Center at University of Michigan through October 6. The show displays a full range of garments from 1900 to 1999. The show posits that despite the use and re-use of certain styles and silhouettes throughout time, the textiles used and their production styles, as well as attitudes toward dress itself, changed drastically. The 20th century was an era in which fashion changed at a faster rate than ever before. There were a number of factors that contributed to this shift that are explored through the inclusion of objects and wall text.

A few factors overviewed in the exhibit’s wall text suggest that this shift can be attributed to the advent of photography, moving image, advertising, and fashion magazines that emphasized the importance of “staying in the mode.” The urgency to keep up with the constant state of flux in fashion and the need to follow current trends can be seen in early advertisements, which began with illustrations informing society of the importance of dress. In the 1930s, however, photographic advertisements began to replace these illustrations.

Hahn also points out the immense impact on consumer culture by television in the middle of the 20th century and the internet toward the end of the century. Fashion is often considered unworthy of attention, an assumption that Hahn contests, pointing out that its history offers a rich look at both societal and cultural attitudes. She states, “Many people think of fashion as something frivolous and without merit, but keep in mind that it is often a catalyst for the economy and the political situation of the times.” To exemplify this assertion, the curator has contextualized each piece with historical information, and organized the exhibition chronologically, starting with 1900.

The layout of the exhibition reminisces a department store, with a large glass table centered in the gallery space, filled with a large assortment of historical shoes. When entering, large white pedestals break up the visual space. Most of the garments are fitted on mannequins or clothing forms, near the gallery walls.

Three large white temporary “walls,” stand in front of the actual gallery walls, drawing attention to four different pieces of clothing from different eras. This also echoes the feel of a store window, with a few of the most interesting objects at the forefront. The walls are lined not only with contextual information from each decade, but additional articles of clothing are physically pinned to the wall. Advertisements from various points in history are also displayed, illustrating the change in advertising medium from illustration to photography that Hahn references in the exhibition’s wall text.

It also becomes clear that even with the increasing use of photography for advertisements, illustrations were used to sell clothing, particularly fabric patterns, a practice that is still used today. Additionally, 1970s advertisements used language such as “Very Easy/Very Vogue” and “Fast and Easy," which demonstrates the trend toward ever-increasing concern for mass production and consumption.

Although mass production was introduced prior to the early decades of the 20th century, class distinctions were much more rigid, and “ready-to-wear clothes” were considered a marker of low social class. From the onset of the 20th century, these class distinctions were gradually lessened, particularly in America, and the mass production of clothing had a vast impact on fashion. Hahn states: “Fashion started at the top with the upper classes, followed by the prosperous middle classes and worked its way down the social scale to the working class.” 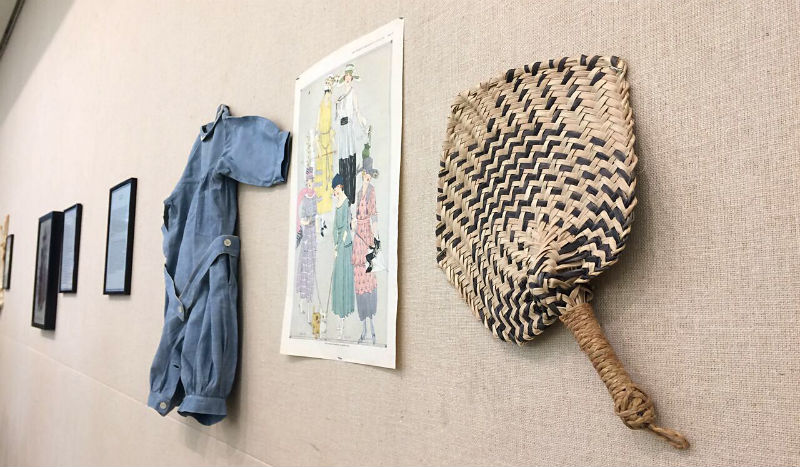 The Looking Back walls are lined with contextual information for the main garments as well as additional articles of clothing.

In the beginning of the century, upper-class women wore corsets and ornate, elaborately designed clothing, which is exemplified in the embroidery and lace adorning the first dress shown chronologically at the exhibition. The labor needed to create one article of clothing was, at that time, much more intensive. To dress a fashionable upper-class woman required servants just to get her into the clothing. Toward the latter half of the century, with lifestyle changes growing more apparent across America, and a growing emphasis on “youth culture,” consumers moved toward “easy care and washable clothing.” The exhibition does an excellent job of pulling examples of the most common styles of each decade and establishing a timeline, mentioning events that had the most profound impact on each era’s modes of production and ideals.

Hahn points out that the “Swinging '60s” and “Roaring '20s” are decades marked by an ideal of “fun” and innovation in fashion. Both decades confronted dramatically changing attitudes toward social behaviors. Both eras featured shortened dresses and skirts, and new forms of accessorizing. Before 1960, fashion was generally much more rigid for women, who followed European fashion that “trickled down” to affordable wholesale manufacturers.

Fashion was impacted not only by social change but also by events happening around the globe. A great example of this is the period during World War II, in which the rationing of goods all over America and Europe impacted fashion. Similarly, the Vietnam War influenced youth culture immensely. During this period, youth rejected societal norms even further than they had in previous decades. This period’s social changes lead to ideologies that produced the “hippy” and “flower power” aesthetics, which resulted in a resurgence of color, new shapes, and new textiles in fashion.

Toward the end of the 1970s, jeans became commonplace, worn by both men and women. By the 1980s, many were gaining newfound success and wealth, and in fashion, it was considered a time of “romantic renaissance.” Motifs from earlier eras began to be seen in everyday fashion, such as the shoulder pad, worn by both men and women. By the 1990s, the fashions of earlier eras were seen as excessive, particularly with social inequalities continuing to grow, and wealth disparity becoming more apparent with the onset of new technologies. In the 1990s, “shoulder pads finally died,” Lycra was heavily employed in textile production, and minimalism became preferable as dress codes and attitudes toward “casual” shifted.

Ending with 1999, the exhibition did leave me wondering what would the show look like if it continued through today with the deluge of technology and consumer goods? Similarly, what would this exhibit look like if it were a collection of textiles from another region in America? Though fashion is often considered commonplace and frivolous, this exhibit does an excellent job of contextualizing fashion as a broad and ever-changing category that is specific to time, place, and culture.