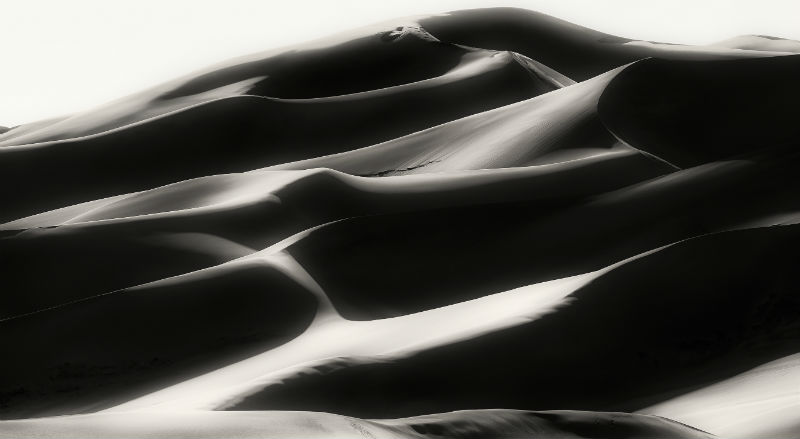 We last saw John Lilley’s photography at the Kerrytown Concert House in June 2012. His John Lilley Photographs exhibition found the Dexter photographer using digital color notable for its exhilarating chromaticity as well as its remarkable penchant for detail.

But as he later tellingly added in that statement, “I’m rarely attracted to the 'big picture.' Rather, my vision is almost unconsciously drawn to distinct designs, textures, and forms that occur as small subsets of the broader landscape. I’m fascinated by the myriad possibilities for abstract composition that exist in our world.”

All of which is to say that Lilley’s current Wandering Around … in black and white shows us that his monochromatic photography is easily the equal of his color work. Indeed, if anything, Lilley’s photographic self-discipline is as much (if not more) vivid than his color art.

The work in this exhibit dates back to the 1970s, from using old-school analog photographic technology right up through contemporary digital work recently executed. None of the photos are dated, which creates a chronological ambiguity that forces the viewer to focus on the art rather than try to trace Lilley’s artful development. This strategy effectively makes each work an equal among equals.

As he says in his most recent gallery statement:

The American Road Trip is, for me, the activity of simply wandering from place to place. I’m not sure if the road trip is an excuse for photography, or if photography is my excuse for the road trip. Whichever it is, the traveling about is an opportunity to see what’s out there, to discover new places and the things that inhabit those places and spaces. When I’m on the road with my cameras I’m totally focused on the undivided landscape. I try to see into that landscape as deeply as I can.

Right said: What’s best about this self-description is that this “seeing” is precisely what Lilley does best. And how he sees -- as much as what he sees -- is what makes his exhibition a superior display of art.

This may be because black and white images tend to appear ageless. There’s often a subtle chiaroscuro tincture that ironically reveals more nuance than the color we would normally see around us. This monochromic shading makes it difficult to date the work because of the composition’s play of light and shadow.

As such, black and white photography is often more dramatic than color photography because of this psychological remove. There’s a nebulous gravity running through the photographs in Wandering Around in Black and White that contrast heartily to the vibrant color patterns of Lilley’s color photos.

Likewise, it’s interesting that one of the more stunning works in the 25 photographs on display is magnificently large-scale if there ever was a “large-scale.” Because for someone who says he’s not looking for the “big picture,” Lilley’s Devils Lake, North Dakota sure looks big enough.

Photographing an aged building next to a silo, Lilley’s Devils Lake is simultaneously a big picture and nuanced study. Shrewdly referencing a touch of early 20th century American Precisionism, the aged architectural structures in the photograph have a gritty integrity that can’t be missed. Lilley expertly captures these structures rectilinear façade with its complex horizontal and diagonal gradation to illustrate each striated scuff that marks its history.

On the other hand, Lilley statement implicitly references “road trips” and other such places --
and what could be more other than landscape photography? His Sand Dunes, Early Morning: Great Sand Dunes NP, Colorado certainly fits this bill. A striking crosswise depiction of nature in its harsh environment, his depiction of this national park is surprisingly serene for such a terrain.

The vista is grandly impressive -- and there can be no denying this fact -- yet Lilley’s judgment softens the environment’s austerity through the adroit manipulation of light and shadow. Really no more than a series of receding sand dunes whose alternation of light and dark creates an internal harmony of visual alliteration, Sand Dunes, Early Morning's interspersed rhythmic contemplation carries the viewer’s eye well beyond the desert horizon.

Yet perhaps the hardest trick for any art photographer using black and white is to craft silhouettes of such a sharp disparity that the precise tonal juxtaposition supplies the entire information one needs to take the measure of the composition. Lilley’s Wires: Concordia, Kansas is easily the masterwork in the exhibit for this reason.

Wires features a black and white contrast that’s startlingly pure in its monochrome articulation. As inspired as it is spare, two supporting triangles (of whatever origin) suspend a tangle of irregularly coiled curvilinear wire through an eye hook bolt in what amounts to a compositional limbo. Lilley dispenses with any semblance of depth in favor of a paradoxical black and white curvilinear and rectilinear abstraction whose precise difference lets the work’s geometric elements hover on the photograph’s foreground. It’s a satisfying inner tension that allows his viewer’s eye to wander as restlessly as does his camera.

John Lilley's “Wandering Around … in black and white” runs through Dec. 3 at Kerrytown Concert House, 415 N. 4th Ave, Ann Arbor. The exhibit is available 9:30 am-5 pm, Monday-Friday, during public concerts, and by appointment. For information, call 734-769-2999 or visit kerrytownconcerthouse.com.

Hotmail has been one of the…