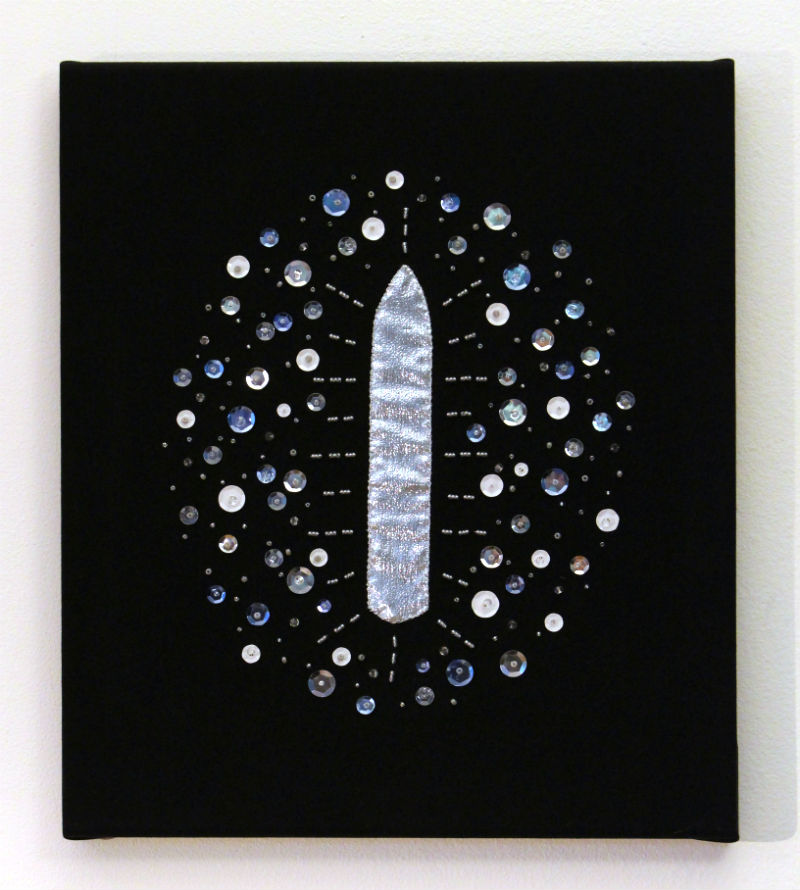 It may initially seem surprising that winter can inspire artists. One would think the nippy climate would discourage creativity.

Yet it’s also fair to say that an austere contemplation can foster art during this most challenging time of the year. Given the ambiance, temperature, and the chilly weather conditions, it’s little wonder that mediation would be a key factor for many artists so inclined.

As the Kerrytown Concert House’s Winter Meditation exhibition shows us, three local artists -- textile artist Kirsten Lund and husband-wife photographers Ann and Fred Ringia -- have in particular found inspiration in this most meditative of seasons.

The mixed-media textile work of Lund isn’t specifically geared to illustrate the winter season. But her use of materials reflects a keen awareness of a mediation that’s heightened by contemplation. As Lund says in her artist’s statement to the exhibit, the “ambiguous iconic shapes” in her art can appear “ancient or modern, biomorphic or man-made, with a common denominator of symmetry.”

It’s this symmetry that’s the closest in contact with the theme of this exhibit. For the symmetrical nature of Lund’s work is certainly an aspect of artistic contemplation.

Her hanging textiles are uniquely individualistic in their appearance. Though her work doesn't bear a direct reflection of wintry imagery, there is what she defines as her inclination toward “abstract central shape” whose “reverence for the energy of life” is demonstrated through “the history of the needle and thread across cultures and centuries.”

This is pretty heady stuff for what are admittedly simple designs, but then less is always more when it comes to the visual arts. And Lund’s straightforward aesthetic very much focuses on the totemic to amplify the pensive element of her work.

For example, out of the 30 mixed-media textile works on display, Lund’s spectacularly demure 14-by-12-inch Untitled (Silver Sequins) is as concise a signature as abstract artworks are able to be. The mixed-media textile stitching -- yes, crafted solely from cloth and sequins -- features a centered silver cloth obelisk surrounded by a galaxy of blue and silver sequins leading the viewer’s eye to the center of the composition by a series of stitched force-lines.

Untitled (Silver Sequins) reflects a magnificent introspective gravity. Lund’s minimalism -- nothing more really than a rectangular cross-section and pyramidal top -- surrounded by her star-burst of sequins, allows her viewer to meditate on the work’s geometry. Expansive yet also skillfully centered, Untitled (Silver Sequins) reveals this artist’s penchant for crafting cosmic themes through the most modest of materials. 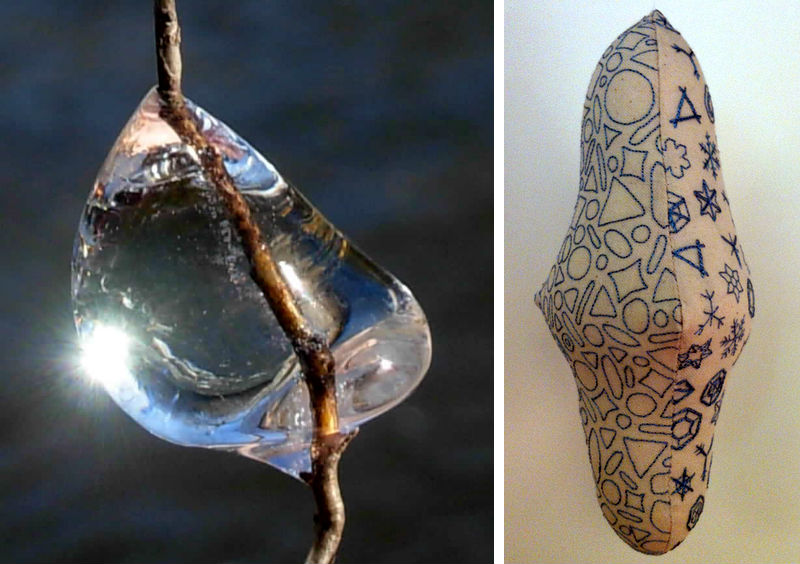 By contrast, the Ringia duo’s color photography in this exhibit is indeed a multifaceted winter meditation. As this husband and wife team says of their color photography, “On March 25, 2011, while exploring the Huron-Stokes Reserve, a park just west of Zeeb Road, siding the north side of the Huron River, we noticed that there were beautiful single globules of ice suspended from twigs, branches, and vines growing along the river bank.”

The adventure didn’t stop there: “Curious to see the possible developments and whatever we might have missed, we returned the next day and found a better area on the south bank of the river, just east of Zeeb Road Bridge. We were amazed to see that the ice globules were growing into interesting and unexpected ways.”

What, in fact, the Ringias found -- which is something any of us could see if we were as skillfully observant -- that weather and river conditions during March create a repetitive cycle of freezing and thawing that creates dramatically differing ice formations. Their photography in this show is natural portraiture of a very special icy meditation.

Perhaps the most striking of 17 superior Ringia color photographs in this display is the 11-by-14 inch Ice Chandelier -- Day Four. A descending series of interlocked ice globules hanging from a branch over the Huron River, Ice Chandelier has an equipoise that, like Lund’s textiles, is simultaneously simplistic yet also extraordinarily sophisticated.

At once a shining example of nature at its finest -- and photography at its most attentive -- the translucent beauty of Ice Chandelier’s frozen beads mirror shimmering bursts of light giving the photograph a sparkling splendor whose descending frozen prism is as artistically eternal as it is temporarily brief. It’s most certainly an art that one could meditate upon for a long, long time.

The Burns-Stokes Preserve is a wonderful but little-known woodland park running between the Huron River and the railroad track for less than a mile. There is an unexpected surprise near the middle. The preserve is worth walking in year round! The parking lot is off the west side of Zeeb Rd. just south of Huron River Dr.