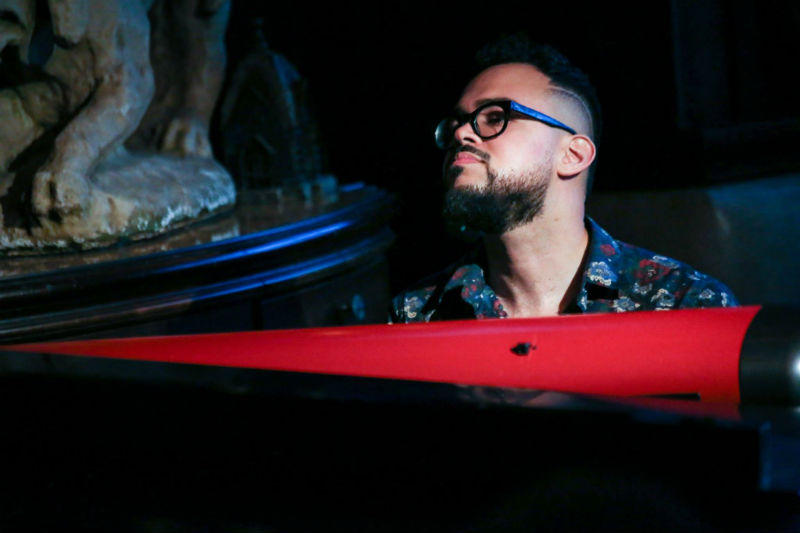 Derrick Benford is a piano wiz who knows a thing or two about jazz. He’s been playing in the Michigan jazz scene for a while now, and this Detroit native has been involved with many groups and artists; lately, he’s been a member of the Gene Dunlap Band.

He’s also a Spirit of Detroit Award winner and has traveled across the U.S., U.K., and Asia working alongside the likes of George Clinton, Marcus Belgrave, and his brother Vassal Benford, among many others in the international jazz scene.

For his latest endeavor, the Derrick Benford Quartet, the pianist meshes jazz, hip-hop, R&B, and gospel into their own funky sound.

The quartet will be performing at AADL’s downtown library on Valentine's Day for a special show dedicated to love in all forms. I spoke to Derrick Benford about many things including his piano background, concerts at the library, his international experiences, and more.

Q: How long have you been playing piano? What influenced you to want to start playing jazz?
A: I’m a late bloomer when it comes to playing piano. I come from a musically inclined family where we performed frequently in front of crowds at church or different events. However, my first encounter with piano was around 12. I took lessons here and there until I reached high school, but in high school, my focus switched from piano to the saxophone. It wasn’t until college that I decided to become serious about piano playing. In 1998, I saw the jazz music department head at that time, Matt Michaels, perform. That moment inspired me to choose and commit to practicing, studying, composing, and learning about the greats in music.

Q: As someone who’s been playing for a long time now, how would you describe the jazz scene here in Michigan?
A: The Michigan jazz scene is alive and thriving. This place has produced some of the most influential artists in jazz music and continues to do so.  Many of my favorite jazz greats’ roots started here such as Kenny Garrett, Ralph Armstrong, Barry Harris, Johnny O’Neal, Rayse Biggs, Marcus Belgrave, Earl Klugh, Bob James, Teddy Harris. So, that musical foundation that we have continues to inspire and be built upon. In my view, there’s seems to be a renewed hunger for the genre: musicians here are innovating and trying to expand jazz by incorporating various uniquely Michigan musical elements. Michigan not only has a rich jazz history, but also gospel, folk, country, hip-hop, rock, and R&B history as well; those styles are being incorporated into the music by our Michigan contemporaries. It’s an exciting time for jazz music in Michigan.

Q: Are there any Detroit musicians who have inspired you? What musicians hip-in general have influenced your playing style?
A: My formal lessons didn’t start until I was 13, with Mother Morning, an elderly lady who was a member of my father’s church. Needless to say, I grew up surrounded by gospel music and heavily influenced by a plethora of great gospel musicians in metro Detroit. My exposure to jazz began in middle school under Byron Johnson. That exposure exploded in high school under Benjamin Pruitt, but the musician/educator that was pivotal to me was Matt Michaels. Then I met my friend Brandon Williams, another Detroit-bred musician, who exposed me to all types of music. There are quite a few musicians in the Detroit area that have inspired and influenced my playing, all of which have played a unique part. If I were to list them (in no particular order), the list would include: Kenny Garrett, Barry Harris, Matt Michaels, Cliff Monear, Rob Pipho, Russell Miller, Demetrius Neighbors, Marcus Elliot, Perry Hughs, Rayse Biggs, Dwight Howard, Gary Schunk, James Carter, J Dilla, Dennis Coffey, Gene Dunlap, Gerri Allen, Robert Hurst, De’Sean Jones; there are others, but those few come to mind. Recently, I’ve been listening to our contemporaries in the music scene such as Taylor Eigsti, Moonchild, Terence Blanchard, Gerald Clayton, Mark Turner, and Robert Glasper.

Q: What were your experiences like in the U.K. and China? How would you say jazz is interpreted over there versus here in the States?
A: The experiences were wonderful overseas. In my view, there’s a different type of appreciation for the genre. Their approach incorporates their musical culture, but the musicians overseas still pay homage to the uniquely American genre. The musicians overseas, like here, have a serious approach. I’ve met some phenomenal musicians overseas. The audiences listen with what I would call a reverenced quality.

Q: What are your thoughts on Ann Arbor’s music scene and have you performed here much?
A: Ann Arbor’s music scene has always intrigued me. The fact that U of M houses a robust jazz program that talented musicians from all over the world flock to says that the city’s artists are at a high level of artistry and talent. Quite a few of my friends attended U of M, all of which I respect musically and appreciate their artistic contributions. The music festivals hosted by the city showcase a diverse music scene. I’ve performed privately in the city on numerous occasions, so I’m looking forward to interacting with people in a public setting. Vulfpeck is one of my favorite groups by the way.

Q: Tell us more about the musicians who’ll be playing alongside you for the concert.
A: I couldn’t ask for a better group of musicians to perform with:

Based out of the Detroit area, guitarist Matt Callaway started his musical journey studying with John E. Lawrence at Washtenaw Community College after graduating from Manchester High in 2004. After his time at WCC, he pursued a Bachelor’s Degree in Jazz Studies from Wayne State University while also teaching at the Michigan State Community Music School in Detroit.  Aside from teaching, Callaway has performed in various styles including jazz, blues, pop, country, and Americana.  Currently, he is a teacher at the Detroit Institute of Music Education.  As a performer, he can be seen with the Callaway Jazz Trio, The Gene Dunlap Band and traveling with Jennifer Westwood and the Handsome Devils, Bobby Streng Group, and The Dan Rafferty Band.

Drummer Alex White has performed with many of Detroit greats such as Robert Hurst and Marcus Belgrave and he currently tours with saxophonist James Carter.

Q: What are your thoughts on performing at a library?
A: We were eager to perform at the library when we received the invite to do so: it’s a privilege to become a part of its history. A library is a place for community enrichment, where you can learn about the past, study for the future, hang with friends, share ideas, enjoy friends’ company and be fulfilled through various displays of art. All of those things are enjoyed in a public place that promotes education and well-being. It’s exciting and we’re honored to perform in Ann Arbor at the AADL.

Q: What can people expect during the concert?
A: People can expect to hear some groove based original composition and my arrangements on some popular covers.

Q: If you weren't a musician, what would you be doing?
A: If I weren’t a musician, I would probably be in computers or in law school.

Q: Where do you see yourself in 5 years?
A: I see myself closer to that greater person in us we’re all striving to be.

I love this day, made an…

his most recent undertaking,…

his most recent undertaking, the Derrick Benford Quartet, the piano player networks jazz, hip-bounce, R&B, and gospel into their own out of control sound.