Minimalism & Maximalism: The National and Courtney Barnett at Hill Auditorium 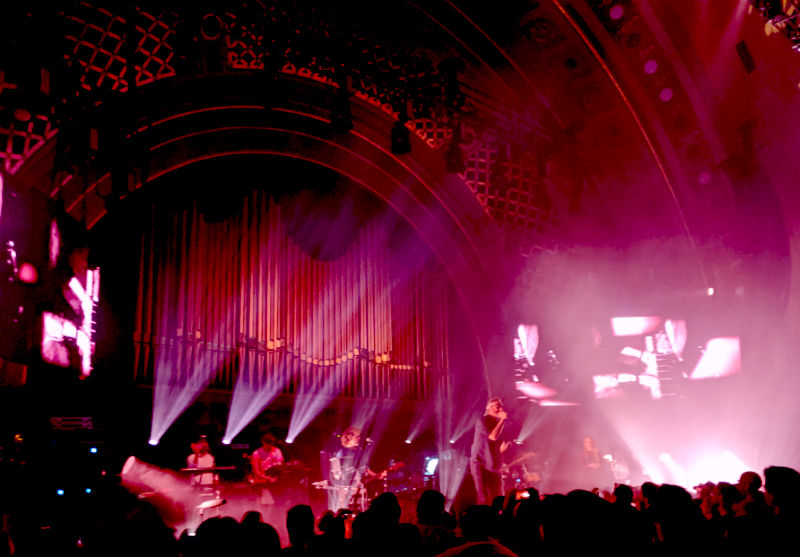 The National at Hill Auditorium. Photo by Christopher Porter.

"How does it feel to be the king of sad-dad rock?" shouted a fan last night at The National's lead singer, Matt Berninger, as he entered the Bell Tower Hotel in Ann Arbor.

The band had just finished a 25-song, two-hour set at the venue across the street, Hill Auditorium, which was filled to its 3,538 person capacity with sad dads (and moms) -- heretofore collectively known as SAD-D.A.M.

Berninger was joined by an augmented version of The National that added four additional musicians to the core quintet and they filled Hill with a massive wall of sound.

But the opening act, Courtney Barnett, achieved a similar feat with just herself on guitar plus a bassist and drummer -- and it was her second performance in Ann Arbor that day: at 12 noon, Barnett recorded an episode of the syndicated radio show Acoustic Cafe at The Leon Loft. (Check out a clip here.) 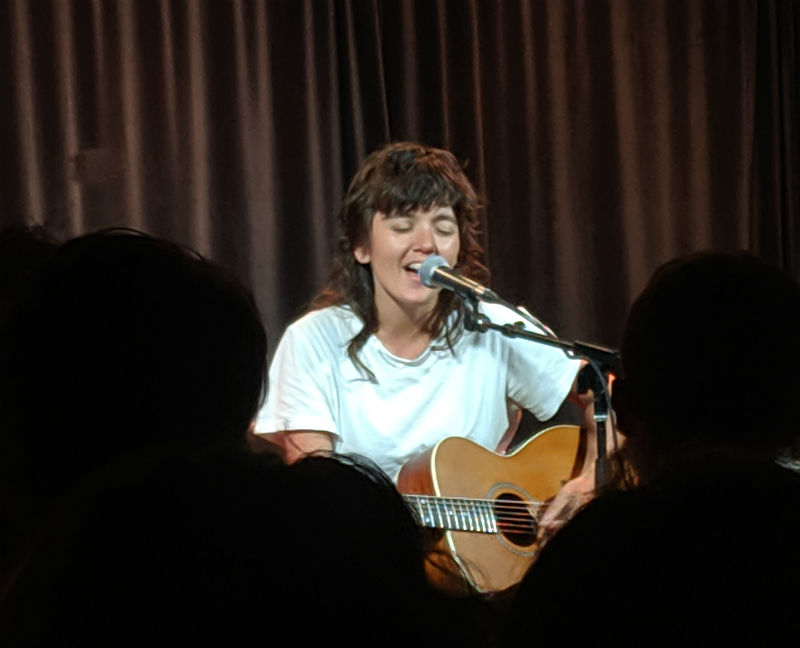 Ann Arbor's 107.1-FM simulcasted the first 30 minutes of the 40 minute, 5-song acoustic set and interview with Barnett. It was an intentionally low-key affair with the Melbourne, Australia artist struggling a bit to wake up her voice and guitar-fretting fingers on the first song, "Need a Little Time."

But as she woke up, Barnett displayed her unique approach to guitar playing. She strums her ax sans pick -- it often looks like she flings her fingers at the strings -- and plays off-kilter chords and lead lines, which recall Willie Nelson's idiosyncratic style.

Barnett was charming in conversion with host Rob Reinhart, who was well-prepared for the interview -- except he didn't know his guest had split from her longtime girlfriend, fellow musician Jen Cloher. When Reinhart posed a question mentioning Cloher, Barnett responded that they were no longer together. A woman in the room immediately offered her daughter as a potential partner for Barnett and the room erupted in laughter. "Welcome to Ann Arbor," Reinhart said. 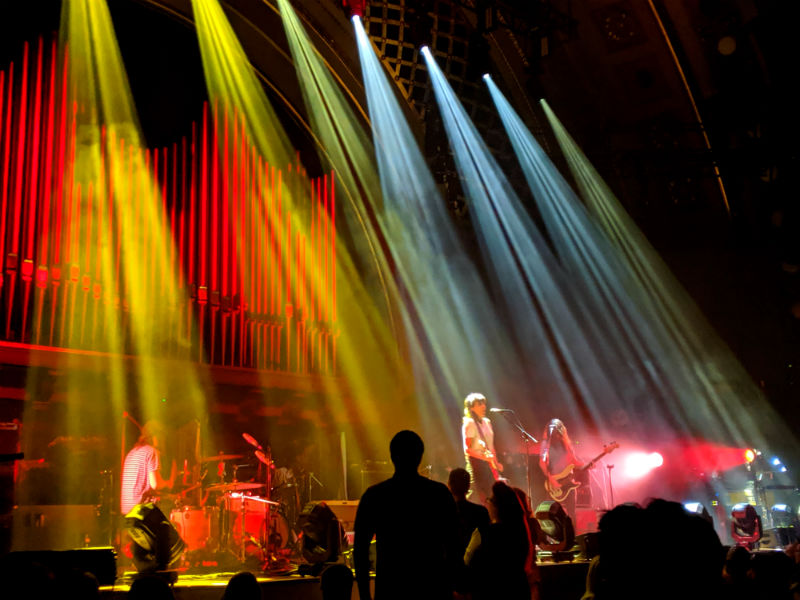 Later in the day, Barnett upped the wattage and her 10-song set of bare-bones, surf-tinged indie rock was well-received by the SAD-D.A.M.s, even though a large part of the crowd was still finding their seats during the performance. The tickets and Hill's website referenced "8 pm," but it was unclear if that meant doors opened then or if the concert started at that time. Turns out it was neither: Barnett started at 7:45 pm on the nose.

Over the course of 45 minutes, Barnett exhibited a joyful rock 'n' roll spirit. Her best songs combine just a few chords and witty wordplay, such as "Avant Gardener" and "Depreston," and Barnett looked like she was having a ton of fun on stage.

"It's a lovely, lovely town -- with good coffee," Barnett said of Ann Arbor before closing her set with a face-stomping rendition of "Pedestrian at Best."

Barnett's minimalism was the inverse of The National's massive stage presence, sonic overload, and baroque energy.

Now in its 20th year, The National has created a huge catalog of literate, smartly arranged songs that in another time would be called "college rock." Performing in a college-rock town was a slam dunk for the band, which reached back to its 2001 self-titled debut album for "Son," but nearly half the set was from the band's new record.

Singer Berninger sipped on a seemingly bottomless red Solo cup throughout the night, and his stage presence was part poet with a 1,000-yard stare and part playful frat bro who climbed into the crowd several times, stole a U-M hat off a dude's head, and called a couple of superfans singing every word "geeks." He seemed to enjoy himself quite a bit.

Those who love The National hang on Berninger's words, which are emotional and elegiac, but his deep voice tended to sound samey over the course of two hours and the additional singers -- which are mixed perfectly on the guest-vocalist-heavy I Am Easy to Find -- were often lost in the mix. There was so much output from the sound system, so many amplified instruments and frequencies blasting from the speakers, that the group's arrangement nuances -- where it excels -- sometimes got buried at Hill. But it didn't matter: This crowd adored The National.

The band closed the concert by turning off all the musicians' mics as the Dessner brothers -- Aaron and Bryce -- played acoustic guitars and Berninger led the audience in a sing-along of "Vanderlyle Crybaby Geeks." It seemed like every single SAD-D.A.M. knew every word of the song and their voices filled Hill with positive energy.

That might not sound like sad-dad rock, but the king's subjects have crowned Berninger and The National ever thus.

The National @ Hill Auditorium
"You Had Your Soul With You"
"Quiet Light"
"The Pull of You"
"Hey Rosey"
"Don't Swallow the Cap"
"Bloodbuzz Ohio"
"Oblivions"
"So Far, So Fast"
"Where Is Her Head"
"Wasp Nest"
"Green Gloves"
"Son"
"Day I Die"
"Carin at the Liquor Store"
"The System Only Dreams in Total Darkness"
"Light Years"
"I Am Easy to Find"
"Graceless"
"Fake Empire"
"Rylan"
~ENCORE~
"Not in Kansas"
"I Need My Girl"
"Mr. November"
"Terrible Love"
"Vanderlyle Crybaby Geeks"

great capture of the night!

great capture of the night!