Review: UMMA The Art of Tyree Guyton and DAAS What Time is It? 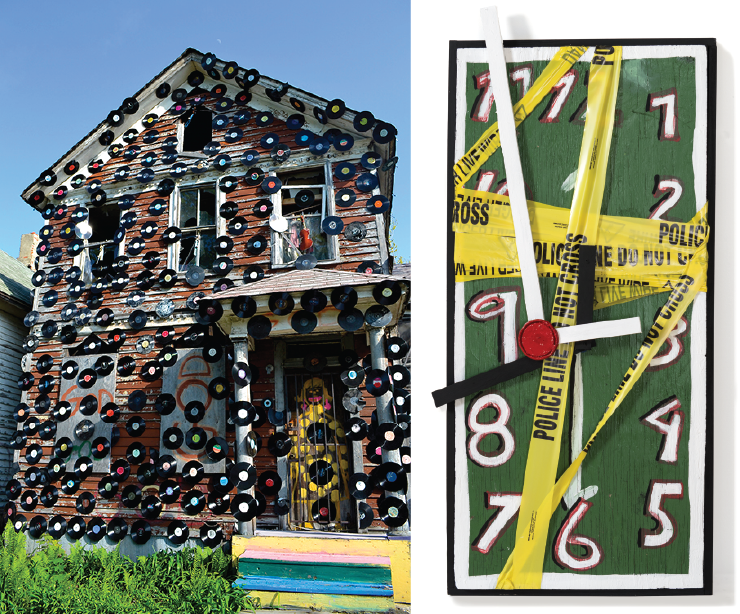 It takes exceedingly broad shoulders to craft an art that suits a specific time and place. This is because art is, despite itself, time specific. Art, however, also paradoxically seeks a timelessness that makes the work somewhat ephemeral to its actual situation. And that in turn makes grappling with the work's creativity a tricky proposition.

Yet perhaps not so much with two artful events taking place in Ann Arbor through this Fall 2015 season. The University of Michigan Museum of Art's The Art of Tyree Guyton: A Thirty-Year Journey and the U-M Department of Afroamerican and African Studies Gallery DAAS What Time is It?: Tyree Guyton, New Work have teamed up to give us a keen sense of how this contemporary Detroit artist has managed to grab the zeitgeist of our time by the throat to show us a controversial reflection that not all Detroiters prefer as a mirror. Add its Ann Arbor angle-and the art of Tyree Guyton is a unique homegrown Southeast Michigan adventure.

As far back as the late 1980s, one of Ann Arbor's most courageous champions of modern art, the late-Jacques Karamanoukian, was enthused (although overwhelmed might be a better way to put it) about Guyton's work-as well as by extension, Guyton's grandfather, Sam Mackey.

Karamanoukian-whose Gallerie Jacques loft and Kerrytown Le Minotaur Gallerie-served up a steady diet of Surreal Art and Art Brut in the 1980s and 1990s, seemingly met his match with Guyton's audacious Detroit-based Heidelberg Project. And in this, Karamanoukian has proven to be much farther sighted than the city of Detroit itself. It's therefore to the credit of the UMMA that The Art of Tyree Guyton: A Thirty-Year Journey skillfully traces this undertaking.

Started in 1986, Guyton's Heidelberg Project is a remarkable example of environmental art whose social and political intent is so gripping, it effectively dominates its ground with a vivacity few other contemporary artworks can match. Located in Detroit's McDougall-Hunt neighborhood, the artwork's evolving intent has been to heighten awareness of the city's urban decay and the State of Michigan's benign neglect in caring for the its inner-district. But it also isn't exactly a way to make friends and influence people in positions of power.

Now if Guyton and Mackie had been intent on crafting some latter-day cathedral or modernist architecture, they might have been able to avoid antagonizing Detroit's officials. But as both The Art of Tyree Guyton: A Thirty-Year Journey and What Time is It?: Tyree Guyton, New Work both show us by example-this wasn't and isn't happening.

Because it's likely not so much the Heidelberg's intent that's drawn the ire of Detroit (after all, both the Coleman Young and Dennis Archer administrations have bull-dozed chunks of the project with a decade of vandalism taking care of many other buildings). Rather, it's the kind of art that's the real problem. Both Mackie and Guyton (the former by disposition and the latter by inclination) are proponents of one of Modernism's most controversial forms of Art Brut-or to borrow from Karamanoukian's favored and vastly telling term: Outsider Art.

Guyton's most serious offense-and one aided and abetted by his grandfather, Mackie-has been the playing of art rules by not playing the social rules. Sam Mackie's two 1992 untitled wax crayon on illustration board and crayon on oil cloth male portraits at the UMMA are prime examples of an Art Brut that's 100 percent inspiration and zero percent artifice.

They might be confused for the art of a young child, but this is also the magic in the crafting. These two roughly drawn pictures crafted in Mackie's 90s (he lived 1897-1992) are channeling pure inspiration and this is an aesthetic that can't be taught. Indeed, once lost it is seemingly impossible to retrieve; Picasso tried all his life. And it's this profoundly naïve insight that makes Art Brut such a powerful form of art.

Guyton, by contrast-and DAAS' What Time is It? shows us this with a choice 16 artworks-is infinitely more polished while also paradoxically retaining its outsider edge. If anything, what Guyton shows us in this remarkable primer is how painstaking it must be to maintain this sort of Brut naivety. He's still got it, so to speak, by studiously not losing it.

For example, 2015's mixed-media “The Twelfth Hour” at the DAAS Gallery fuses together a handful of found elements with an artful balance whose placement belies Guyton's rush of inspiration in pulling his compositional elements together. A piece of green rectangular wood set horizontally to represent the face of a clock, Guyton had painted (through four applications) numerals with two overlaid pieces of black and white wood for big and little hands breaking the work's interior visual plane behind overlapping patches of police security tape.

We need make only two observations: First, the clock's hands aren't pointing at twelve; and second, it's the eleventh hour that's cautionary. For as the work tells us by abstraction-with the title's timely assist-twelve is beyond the nick of time. Hence, given the roughness of its creation and appearance, coupled with its title, Guyton pictorially articulates a pungent political statement.

Going back momentarily to the UMMA's The Art of Tyree Guyton: A Thirty-Year Journey, it's this very lack of aesthetic compromise that raised the disdain of Detroit's political establishment. Guyton's Heidelberg Project is too uncompromising to stand on its own because we're not talking Venus on the half-shell, here.

As soon as Guyton began crafting his mixed-media environmental art with exceeding large found objects (obviously considered detritus by its opponents), he passed the bound of artistic delicacy. As Guyton's UMMA Thirty year Journey clearly shows us: the gloves were bound to come off with each found object nailed in place: Take Guyton's “House of Soul” with Motown vinyl LPs (torched in November, 2013) or “The Doll House” with its myriad plastic baby dolls stapled to the exterior (torched in March, 2014). Both houses-like the seven other environmental mixed-medias burnt in these last few years-could be perceived as eye-sores.

But they're not eye-sores. Like it or not, they're art. For Guyton has made them art-and by the reckoning of Marcel Duchamp; father of neo-Dada, which the Heidelberg Project is a clear example-it's the artist who decides what is art.

It's not what politicians think-nor what art critics think--nor citizens, for that matter. As Jacques Karamanoukian well knew before most of us were aware of its existence: The Heidelberg Project (with its long-range goal of being an art center, museum, and artists' colony) is not art for art's sake. It's art for everyone's sake. Tyree Guyton just happens to be Detroit's messenger.

U-M Department of Afroamerican and African Studies Gallery DAAS: What Time is It? Tyree Guyton: New Work will run through November 6. Gallery Dass is located at Haven Hall, Room G648. The Gallery is open Monday-Friday, 1 to 5 p.m. For information, call 734-764-5513.