"In October of 1974, just before Jane and I left Michigan for New Hampshire, we attended an extraordinary dinner party, which exploded me into a poem. Two of my students, Ric Burns and Stephen Blos, bought a roast suckling pig at the Eastern Market in Detroit, to serve to friends and teachers. They cooked it in the big oven at Stephen’s family house, following directions from a cookbook. It told them to remove the pig’s eyes first, so that they didn’t burst during cooking. Ric later told us that cutting the optic nerve was like severing a steel cord. To carry the cooked pig across town to their rooms, Stephen and Ric put long poles over their shoulders and dangled dinner between them. They marched down South University Avenue, across Washtenaw Avenue, and trekked through campus to their flat. When guests arrived, the corpse occupied one end of the long table, a raw apple in its mouth. I sat beside it, shrieking with delight, and transferred the apple into my own mouth. Stephen’s camera clicked beside me, preserving the dinner forever. Jane had to look away. “Sweetheart,” I explained, “I know this is not your me!”

At the table, carnivorous guests devoured the pork in the throes of ecstasy. Charles Lamb, in “A Dissertation Upon Roast Pig” had celebrated the taste of roast pig two centuries earlier, by means of a thousand images and metaphors. He concluded that, “There is no flavor comparable.” He was right.

The next morning I ran to my workroom and began to scribble pig-lines of poetry. I spilled out a tsunami of images and diphthongs and metaphors and obscurities. My handwriting could not keep up with the verbal torrent. I picked up my DeJur Grundig Stenorette microphone (I dictated letters) and recorded pig-poetry line after line at an unprecedented speed. Later, of course, in my handwriting I revised the poem, a hundred drafts until I got it right. In a lifetime of poems, it remains the only poem that I started by dictating."

This site chronicles in poetry, prose, photographs, and paintings the now-famous Ann Arbor literary dinner that led to the poem "Eating The Pig," which former US Poet Laureate Billy Collins declared "should be required reading for all literate carnivores." (It's also required reading or listening before viewing the exhibition in order to see how the evening's photos provide context and fuller understanding of Hall's poem.) It also provides a rare glimpse into the genesis of artistic inspiration and the process of writing.

The 1970s were a good time for poetry at the University of Michigan in Ann Arbor. Every week or so there was a reading by a luminary in the field: Donald Hall (who taught at U-M), Robert Bly, Galway Kinnell, Joseph Brodsky, and Jorge Luis Borges, to name a few. 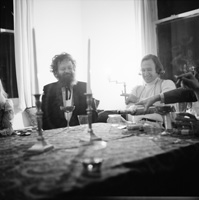 Among the guests at the dinner party were other poets, artists, and a future filmmaker:

Stephen Blos later studied photography at Hampshire College and moved to New York City in 1979. He made his living as a photographer, and as a printer for other photographers such as Helen Levitt and Bruce Gilden. Stephen died in 1985 when he was 30 years old, leaving hundreds of negatives.

Jane Kenyon, poet and translator of the Russian poet Anna Anakmatova, lived in New Hampshire with Donald Hall and was the Poet Laureate of the state when she died in 1996 at age 47. Jane wrote a poem in memory of Stephen Blos.

Bert Hornback, emeritus professor of English, retired in 1992 from the University of Michigan after a distinguished career. We recently had the opportunity to talk with Bert about his time in Ann Arbor, including his friendship with Donald Hall and the night he ate the pig.

Donald Hall now lives at Eagle Pond Farm in New Hampshire. He was the Poet Laureate of the United States in 2006 and was awarded the Presidential Medal for the Arts in 2010. He and Sarah Innes met in 2015 to discuss showing the poem and photographs together. Innes' sketches of their meeting in New Hampshire are included in the exhibit, as are a series of letters exchanged over the years about the project. Listen to Donald Hall read "Eating the Pig" in 1978

This exhibition is a good example of how art happens: It happens out of daily life. 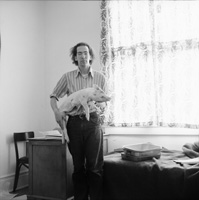 Photographs of the dinner party by Stephen Blos

Local artist Sarah Innes was also present at the dinner party that night. These paintings and drawings were inspired by that event as well as recent visits with Donald Hall at his home in New Hampshire.

Watch a video about the exhibit from Creative Voice.