The Pink Egg
Features in Competition | Totally Out There | Classic AAFF
If you're going to make a film that fits the aesthetic of the Ann Arbor Film Festival, Luis Bunuel makes for a near-perfect starting point. Director Jim Trainor begins The Pink Egg with a quote from the celebrated surrealist: "You can find all of Shakespeare and De Sade in the lives of insects." That sentence offers a pithy declaration of artistic intent, and Trainor follows through, offering viewers a one-of-a-kind evocation of the animal world.

Employing boldly minimalistic and colorful sets that could double for an unhinged, low-budget children's program, Trainor casts humans clad in long-sleeved, hooded unitards to act out the mating rituals, lifecycles, and surprisingly human experiences of various wasps, bees, and insects. Alternately humorous, tragic, and inspiring, The Pink Egg remains a defiantly uncommercial picture due to the lack of dialogue, and the seemingly bizarre actions of the nameless characters. You may find yourself asking why some of the female characters paint pink and blue tubes with lotion, meant to represent seminal fluid, and why those tubes suddenly change color. 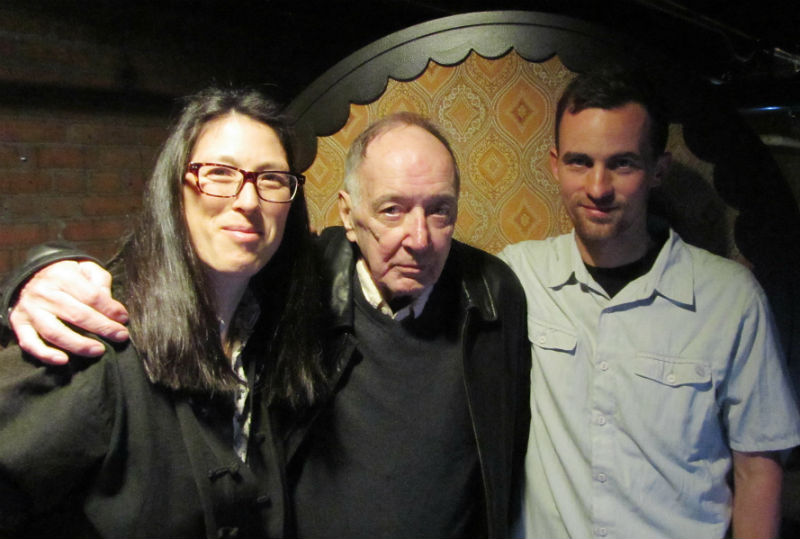 The 55th Ann Arbor Film Festival gets underway Tuesday, March 21, and as artists and film lovers from around the globe prepare to descend upon the Michigan Theater for six days of mind-expanding cinema, Executive Director Leslie Raymond is on a mission to take the country's longest-running avant-garde and experimental film festival back to its all-inclusive roots.

Founded by George Manupelli in 1963, the AAFF has seen its share of shake-ups over the course of the past decade. From the AAFF v. State of Michigan lawsuit that resulted in part from the controversy that erupted over Crispin Glover's award-winning 2005 feature What Is It? to the departure of Program Director David Dinnell last year, Raymond no-doubt had her work cut out for her when she stepped into this pivotal role.

Fortunately for filmmakers and audiences alike, Raymond was no stranger to either the festival or Manupelli's original vision for it as a place where all voices and perspectives are celebrated. Twenty-five years ago, Raymond began her decades-long relationship with the AAFF as an intern under Program Director Vicki Honeyman, whose enduring 14-year run with the festival was longest anyone has served in such capacity other than the founder.

To take the reigns of a festival as celebrated and prestigious as the AAFF requires genuine dedication, and as anyone familiar with Raymond's impassioned 2009 blog post lamenting the "specialized, themed-programming" that had become a primary focus of the festival during that era, there was little question as to where her loyalties lied.

Flash forward eight years, and Raymond is now in the unique position of being able to turn those criticisms into concrete action. Raymond's deep respect for Manupelli's original vision is evident when listening to her speak about her late friend and the festival he conceived, and together with new Associate Director of Programs Katie McGowan, the executive director is on a mission to steer this ship back on course.

With Ann Arbor still recovering from the devastating windstorm dubbed the "largest combined statewide event in history" by Gov. Rick Snyder less than a week before the Opening Night Reception, Raymond was kind enough to take the time out from her hectic schedule to discuss these issues and more with Pulp.

FOR THE BIRDS: U-M adjunct Keith Taylor and Ann Arbor artist Tom Pohrt have teamed up for a new book of poems and illustrations that meditate on nature. The 49 poems that comprise The Bird-while, which is part of Wayne State University's Made in Michigan Writers Series, is Taylor's 16th collection of verse, though not his first to explore the natural world. Nature has always been an important part of Taylor's work; check out "The Day After an Ice Storm." Literati will host the book launch for The Bird-while on Friday, January 27 at 7 p.m. (➤ Wayne State University Press)

200 CENTS OF SENSE: This year’s Washtenaw Reads book selection is $2.00 a Day: Living on Almost Nothing in America by Kathryn J. Edin and H. Luke Shaefer. The authors are coming to Rackham Auditorium on Tuesday, February 7, and the Ann Arbor District Library is hosting several events related to the book. Get the full scoop here: (➤ AADL)

NEW KICKS: When a musician gets asked to compile a mix for the DJ-Kicks series, it’s like a baseball player making the All-Star Game. Since 1993, the German !K7 label has had some of the world’s biggest electronic music artists, including Carl Craig, Hot Chip, Actress, and 54 others create DJ-set albums -- ones that still sell really well even though virtually every music website offers approximately 273,000 mixes to download for free.

Now it’s Matthew Dear’s turn to boot-up a mix, and the Ann Arbor artist and co-founder of Ghostly International is celebrating his DJ-Kicks album with a party at the Blind Pig on Friday, January 20. (UPDATE: Fellow Ghostly star Shigeto has been added to the gig.)

Dear will be DJing and dropping cuts from the 57th DJ-Kicks comp, which includes his new song, “Wrong With Us,” plus 24 more jams from the likes of Simian Mobile Disco, Pearson Sound, and Audion (aka Dear’s more dance-oriented alter ego).

Not familiar with Ghostly International or its sister label, Spectral Sound? If you’re an Ann Arbor District Library card holder, you can download almost everything the labels have released, free of charge, including many Dear and Audion classics. (➤ !K7) (➤ Blind Pig) (➤ AADL’s Ghostly/Spectral collection)

For the last 12 years, Chrisstina Hamilton has been working out a puzzle of sorts for thousands of people to enjoy. As director of visitors' programs for the University of Michigan's STAMPS School of Art & Design, Hamilton organizes the school's popular Penny Stamps Speaker Series.

"It's sort of like this 3-D Rubik's Cube kind of thing when you're trying to put it together, and it's incredibly difficult because you lose pieces here and there," Hamilton said. "People want to line up, and you think, 'We can't have this come after that.' But somehow, miraculously, it ends up all coming together."

The free guest speaker series takes place Thursdays at Ann Arbor's Michigan Theatre (with a few exceptions) and features artists that represent a spectrum of media, backgrounds, and viewpoints.

The winter 2017 season gets underway this week and follows on a successful fall 2016 run, which included a surprisingly chatty Mark Mothersbaugh (Hamilton had been told the artist, composer, and Devo frontman could be shy in front of crowds, but not so here: "He just told story after story," she said. "We could barely get him off the stage") and the series' first foray into hosting satellite events in neighboring Ypsilanti.

Hamilton said the big challenge every season is making it "incredibly diverse" in terms of mediums people work with and perspectives they offer, as well as gender, and race.

BLOOMING GROVE: A new 6,500 square foot rehearsal/artist/performance space is now open in Ypsilanti. Grove Studios (1145 W. Michigan Ave.) aims to be "clean, secure, safe, inspiring, climate-controlled, and convenient," founder Rick Coughlin told Concentrate Ann Arbor. While Coughlin is more focused on Grove being a rented rehearsal space, the venue has already hosted a couple of events since its soft launch in early December. The concert schedule is ramping up, too, thanks to the Ann Arbor-Ypsilanti Music and Arts Guild, which has booked several concerts at Grove this month {link}, including performances by Gruesome Twosome (Jan. 13), Annie Palmer (Jan. 20), and Doogatron (Jan. 27). (➤ Concentrate Ann Arbor)

SONIC LENDING: MTV's The Stakes podcast interviewed Josie Parker, director of the Ann Arbor Public Library, about why AADL lends things like synthesizers, effects pedals, drum machines, guitars, amps, and mics (as well as telescopes, metal detectors, dinosaur skulls, and those thingies called "books"). Check out what we have in our Music Tools collection as you listen; the interview starts at the 11:30 mark. (➤ MTV's The Stakes) 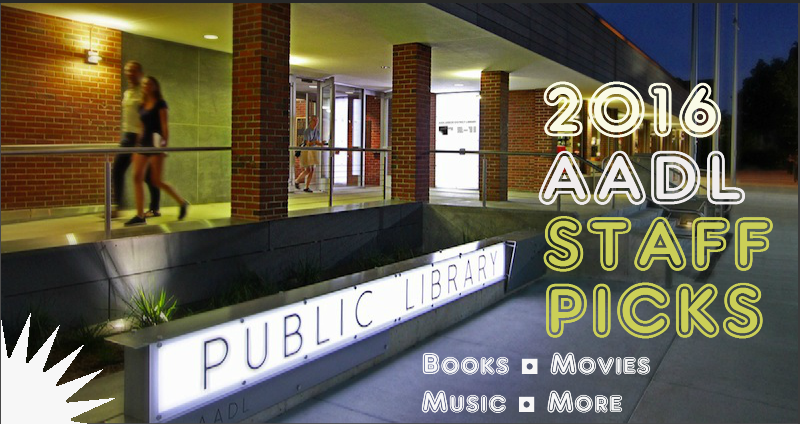 We don't just lend media; we indulge in it, too!

The Gregorian calendar rules most of the world, but time is a continuum. That's why our 2016 Ann Arbor District Library staff picks for books, music, film, and more include items that go back as far as 1865. Our list is comprised of media (and a few other things) that made an impact on us in 2016, no matter when the material came out.

Libraries have always acted as curation stations, helping sort through the vast amount of media released every year. On our website, we have more than 50 staff-curated lists of recommendations, but we don't just advocate for things digitally. We share our "picks" in person every time you step into the library. Books with prominent positions in our spaces, whether facing forward or on shelf tops, are chosen by staff members because they want you to pick up those pages.

Consider the massive post below featuring 55 books, 25 films and TV shows, and 20 albums -- plus a few odds and ends -- as a continuation of those curated lists, those forward-facing books, and the Ann Arbor District Library’s ongoing mission to bring high-quality art, entertainment, and information into your lives.

So, ready your library cards: Most of the recommendations below are in our collection; just click on the {[AADL]} link at the end of each pick to be taken to the item's page on our website.