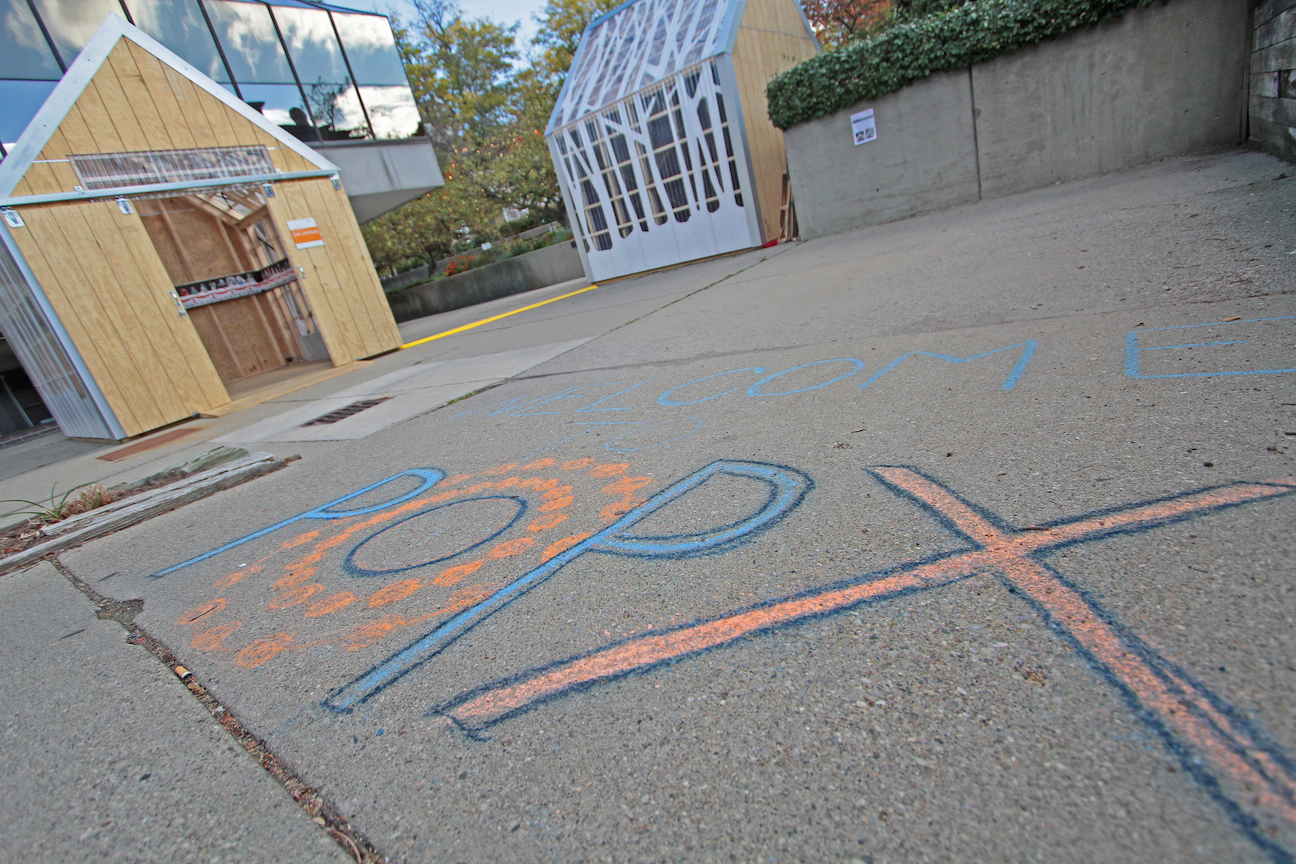 At the entrance to a 10’ x 10’ pavilion made of plywood and corrugated plastic at the edge of Liberty Plaza, I feel like I’m peering into some sort of mystical forest. Past the artificial palm fronds that frame the doorway, there are tall, mossy, finger-like artificial rocks awash in gentle blue light. Cottony clouds hang from the ceiling and recorded sounds of wind and woodland activity play softly.

A sweatshirt-clad, middle-aged man with a scraggly beard steps up behind me and I turn around. His expression is puzzled.

“Is there weed in there or something?” he asks.

The pavilion containing Ann Arbor artist Nick Zagar’s forest landscape is one of eight pop-up structures comprising the Ann Arbor Art Center’s new POP•X exhibition in Liberty Plaza. Even at a cordoned-off POP•X preview event, it’s impossible not to confront the odd dichotomy between the plaza’s typical usage and the purpose it will take on for the next 10 days. Ann Arborites know the downtown park as a regular hangout for the homeless, the subject of repeated city council debate. Through October 24, however, it will be the site for POP•X, which organizers describe as the first step in a larger mission to create more publicly accessible art experiences in the Ann Arbor community.

All eight pavilions look essentially the same from the outside: unfinished wooden doorways at the front and back, with white silhouettes of trees crisscrossing the transparent sides and roofs. Inside, each pavilion is unique, tailored to the eccentricities of the artist or group who worked on it. Where Zagar fills his entire pavilion with his fantasy naturescape, artist Joe Levickas’ pavilion contains just a narrow band of illustrations of cartoon figures sitting down to a dinner party, like a surrealistic 50-person “Last Supper” stretching across three walls.

However, the most interesting pavilions at POP•X are those that directly engage with Liberty Plaza’s usual population and associated issues of economic disparity. Brenda Oelbaum’s somber installation uses black curtains to block out the light that streams into most POP•X pavilions, with a large mural inside presenting a quote Oelbaum’s grandmother adapted from Herodotus: “If we all put our troubles in bags and took them to the market to exchange them, upon seeing the problems of others we would gladly go home with our own.” Visitors are encouraged to write down their problems and leave them anonymously in a pile of small black pouches. Visitors may then read others’ problems and “purchase” them for a donation to the Ann Arbor Community Center or Mercy House, both charities supporting Ann Arbor’s hungry and homeless.

Just across from Oelbaum’s installation is a pavilion designed by the nonprofit Girls Group, which focuses on empowering young Ann Arbor and Ypsilanti women to stay in high school or college and avoid teen drug use and pregnancy. The group’s young participants have contributed a variety of works based on the concept of “home.” The most powerful work in the pavilion is a looping video of Dea Chappell, a fiery young Ann Arbor poet and high school junior, reading her poetry. “Welcome to black America,” Chappell almost sobs. “I can’t breathe…but black lives matter, right?” Standing by her untitled collage addressing themes of black sisterhood and protest, 17-year-old Skyline High School student Alexandra Cash tells me living in Ann Arbor has made her more aware of her “blackness.” “You can be really smart and get really good grades but still be on the lower end of the white kids,” Cash says.

Ypsilanti artist Nick Azzaro’s pavilion provides POP•X’s most direct statement on Liberty Plaza’s usual inhabitants, and one of the most powerful statements in the show overall. At the center of Azzaro’s installation is “The Statue of Liberty Plaza,” a figure built from hundreds of tiny plastic army men and other military-related toys, posed in the form of Lady Liberty. The figure wears torn jeans, stuffed with newspaper and corrugated cardboard. In one hand it holds a copy of Groundcover News, in the other a sign reading “HOW ARE YOU TODAY?” On the walls surrounding the statue are professional portraits of individuals Azzaro met while spending an average, non-POP•X day in Liberty Plaza. The portraits are larger than life and most of the subjects grin broadly as they look directly into the camera, a white background behind them. Azzaro’s work encourages visitors to gaze upon the “huddled masses” we might otherwise ignore as we walk past Liberty Plaza, and to find a welcoming expression and a human story there.

Adjacent Azzaro’s pavilion is a more traditional representation of Ann Arbor’s art establishment. The Ann Arbor Women Artists’ pavilion, a collaboration between 30 of the 64-year-old organization’s members, is a delightful Art Nouveau-inspired outdoor picnic scene. Ruffled tissue-paper grass surrounds a painted pathway through the pavilion, suggesting a river. Plates are heaped with clay and Styrofoam fruits and vegetables, and dragonflies made of wire and tissue paper float overhead. It’s lavish, lovely and certainly more focused on craftsmanship and aesthetic beauty than political commentary.

But that’s part of why POP•X works so well. I was initially unsettled by the idea of an art show displacing Ann Arbor’s less fortunate for 10 days. But while POP•X’s organizers set out to bring art to the whole community, they’ve achieved something even higher: bringing our community face to face with itself. POP•X doesn’t whitewash Liberty Plaza for the enjoyment of some artistic elite, nor does it shut out more traditional voices from our local art scene. It forces anyone who explores all eight pavilions to confront diverse aspects of a complex town that is too often described in generalizations. Here, a Liberty Plaza regular may wander through the Women Artists’ picnic wonderland, or one of the well-dressed socialites I rubbed shoulders with at the preview event may take a moment to look into the eyes or listen to the words of Ann Arborites considerably less fortunate than him or herself. POP•X is many things: fun, sobering, beautiful, contemplative. But most importantly it’s responsible and respectful to the full scope of the community it represents.

Patrick Dunn is an Ann Arbor-based freelance writer whose work appears regularly in the Detroit News, the Ann Arbor Observer, and other local publications. He can be heard most Friday mornings at 8:40am on the Martin Bandyke morning program on Ann Arbor's 107one.