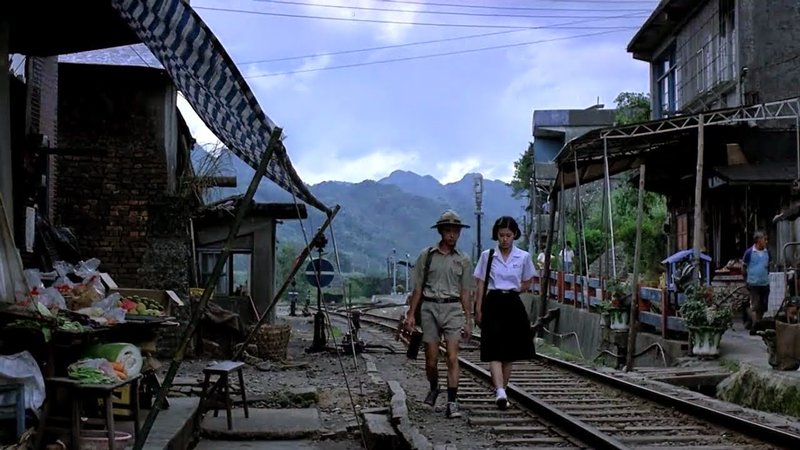 Hou Hsiao-hsien’s film Dust In the Wind opens with the puzzling image of a tiny rectangular shape, its top rounded, hovering against a black background. It appears at first to be an animated image, crudely rendered given the film’s 1986 release date. But it quickly becomes clear that we are swiftly traveling towards the image, rather than it floating towards us, and that it’s not a man-made drawing but a depiction of natural splendor. The shape is the light at the end of a pitch-black train tunnel, and the camera swiftly explodes out of the passage to reveal the stunning greens of the lush forest beyond.

This striking opening shot may be the most obvious way Taiwanese director Hou leads us to find beauty in seemingly mundane moments in Dust In the Wind, but it’s certainly not the last. The film screened Monday at the Michigan Theater to kick off “Also Like Life: The Films of Hou Hsiao-hsien,” a series of free screenings running through Nov. 11. The plot of Dust In the Wind is simple, almost pedestrian: a young couple, Ah-yuan (Wang Chien-wen) and Ah-yun (Xin Shufen), seek to escape their impoverished life in a Taiwanese mining town. Mining life has already left Ah-Yuan’s father injured and at the mercy of greedy pharmaceutical providers. Ah-yuan and Ah-yun travel to Taipei, where they take tedious jobs–he as a print shop assistant, she as a seamstress–to send money home and to fund their own night school and eventual wedding. They make a few friends and go out to drink and socialize when they can. Hardly leading a robust life to begin with, Ah-yuan and Ah-yun face their greatest challenge yet when the draft board calls Ah-yuan up for a lengthy tour of military service.

Hou is noted as a major voice in the Taiwanese New Wave cinema of the ‘80s, which emphasized realistic stories of everyday life in Taiwan. As such, having noted the rather bleak circumstances of Ah-yuan and Ah-yun’s lives and their tenuous young love, it’s not too difficult to predict the fate that will befall their relationship when Ah-yuan departs for the military. But Hou finds many a moment of warmth, beauty and wisdom in what could be a much more harrowing tale. He repeatedly frames the exterior of Ah-yuan’s family home in an extreme wide shot, encouraging us to appreciate not only the colorful hustle and bustle on the steps of the home but also the action that takes place in the courtyard beyond. There’s even gentle humor in the tale, as when Ah-yuan’s father accidentally lights a firecracker rather than a candle in the dark. (Ah-yuan’s grandfather, beautifully played by Li Tian-lu, is a repeated source of both sly humor and somewhat dark wisdom.) Hou repeatedly directs us toward the kindness and love in this dark story, from family members comfortably sharing food and drink to Ah-yun quietly nursing Ah-yuan back to health during a bout of bronchitis.

As the title of the film would suggest, the characters seem battered by life’s trials, cast adrift in an uncaring world they have little ability to fully comprehend, let alone control. But in the many warmer moments Hou creates here, he also seems to suggest that the characters are equally ignorant of some of the gifts that are present in their lives. It seems no mistake that Hou follows his spectacular opening POV shot from the train with a shot of Ah-yun and Ah-yuan onboard the vehicle, complacently reading, paying no attention to the spectacular scenery we’ve just been treated to. In a simple but metaphor-laden exchange between Ah-yuan and his grandfather at the film’s end, it’s difficult to tell just how much our characters’ eyes have really been opened. But Hou has certainly opened our eyes to some of the beauty in these difficult lives, and perhaps encouraged us to think differently about our own lives as well.

The “Also Like Life” series will continue through Nov. 11 with the following free screenings at the Michigan Theater:

The “Also Like Life” series will continue through Nov. 11 with the following free screenings at the Michigan Theater: Flowers of Shanghai on Nov. 10 at 6 pm; Good Men, Good Women on Nov. 11 at 5 pm; and Millennium Mambo on Nov. 11 at 7 pm. More information can be found on the University of Michigan Kenneth G. Lieberthal and Richard H. Rogel Center for Chinese Studies page.