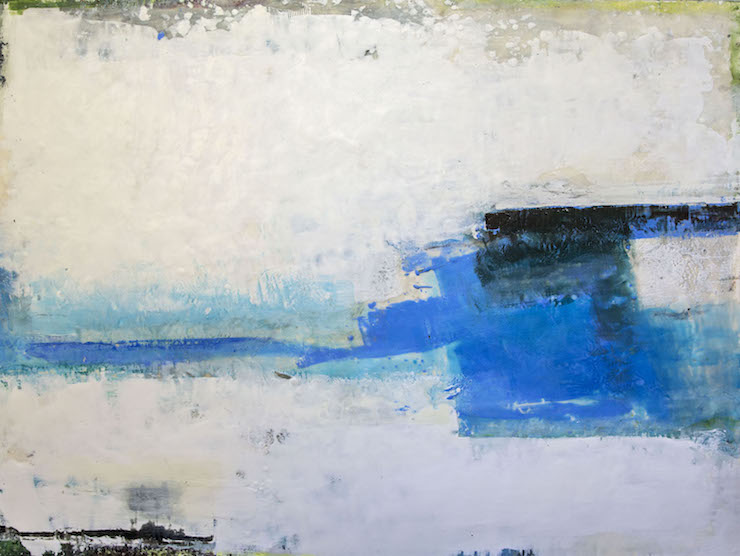 In Lynda Cole’s hands, North is not only a primer in the emotional power of abstract art—it’s ultimately as much a state of mind.

Granted by this local artist’s definition, “north” is a psychological place, but when seen at downtown Ann Arbor’s WSG Gallery, North is as much a time as it is a place. And it’s in this fusing of time and space—both melding a particular state of mind—where “north” resides.

“My future travel will have to have ice in it,” Cole says in her gallery statement. “Where ice is found I encounter stillness, a beautiful quality of light, large horizons of the sea and sky and the color and purity of the ice. These things contribute to a feeling of tranquility I don’t find in most other places.

“On a recent trip to the Arctic during the midnight sun,” continues Cole, “early one particular morning, I looked out over the Arctic Ocean and felt as if I was Alice falling down the rabbit hole. The sea was entirely still with bits of ice in it.

“The light quality of the sky was a pale palette, striped and moody. It felt unlike Earth.”

This moodiness is reasonable as what Cole seems to mean is that “north” is as much an expressive place as it is physical location. But as a depiction of emotion, it might not also be much of a stretch to say it’s rather a way of life: A durable outlook that’s as much equal part exaltation as it is seclusion.

“The paintings in this exhibition are painted with beeswax, Damar resin and dry colored pigments on various substrates,” says Cole of her work’s technical expertise. “Many layers of wax are painted on the substrate and heated with a torch to fuse them to layers below. It’s an ancient technique which has enjoyed a certain revival during the past 50 years or so.”

A certain revival, indeed—fusing her layers of wax with heat to bond her working surface to a high gloss luminosity, Cole’s wax is sculpted and combined with collage material to create swaths of incandescent facture whose flaring textures reflect a subdued solemnity. But it’s also a solemnity with purpose.

The title work illustrates the stunning effect Cole can craft with her materials. “North”—36” x 48” with an impressive two-inch depth—is a meticulous masterwork whose frosty pigments compete with beeswax to create a moody visage of abstracted ice and air. The work’s upper and lower irregular grids flank, yet do not quite contain, a center of competing blue fields whose incandescent depth pull the viewer’s eyes into the composition more by suggestion than articulation.

Not quite improvisation, for Cole’s command of her materials is far too controlled for this laxity, yet loosely enough crafted to allow for nonrepresentational inventiveness, “North” instead reflects an emotional timbre whose resonance strikes a firm expressive state. What’s outwardly rigid in its appearance is also nuanced in its form. For “North” is a kind of painting that requires a contemplative deliberation and willingness to explore the infinity of its surface.

It’s also a call for a thoughtful appreciation of our environs—here and elsewhere.

One of six other such considered paintings on display, North like the rest of Cole’s latest offerings at WSG follows in the unhurried continuum of her art. Her work is a reminder that art nature (like nature) often unfolds meditatively in its own time and in its own manner. We must merely follow in the imaginative manner of our forebears to appreciate splendor on its own terms.