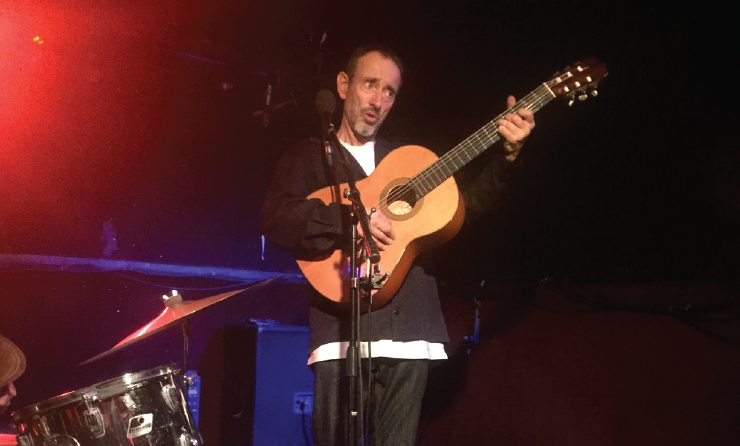 Jonathan Richman, accompanied by his long-time drummer Tommy Larkins, gave fans an intimate and fun performance this past Sunday, November 15, at the Blind Pig. Richman, who created the well-known band The Modern Lovers in 1970, has been touring on his own for decades, often accompanied by Larkins. Their extensive time together has made them the perfect duo: on occasion, Richman will lean over and suggest a vague beat to Larkins, who always seems to know exactly what he means and adjusts his drumming without expression.

As is traditional for Richman’s style, he rarely played a complete song at his Blind Pig show. Instead, he played snippets of songs, interspersed with direct conversation with the audience and wild dancing around the stage, typically with a maraca in each hand. Heavily influenced by other cultures, Richman sang songs in Italian, Spanish, and Arabic as well as in English, generously pausing throughout each one to translate for those of us who hadn’t the faintest idea what he was singing about. He encouraged fans to dance and clap, especially during upbeat songs like “I Was Dancing in the Lesbian Bar” and “Keith Richards.” Every so often, Richman paused and said, “Let’s see what Tommy is up to on the drums,” stepping back to grab his maracas and take a dance break while Larkins—still expressionless, of course—regaled us with a nifty drum solo.

One of my favorite moments of the evening came in the middle of Richman’s song “When We Refuse to Suffer.” He paused and stepped forward on stage to chat with the audience about driving through the United States with Larkins on prior legs of the tour (a funny image in and of itself, when you imagine Richman talking a mile a minute and gesticulating wildly while Larkins sits unmoving and silent in the passenger seat). At a gas station in Texas, Richman was struck by a magic marker sign taped to the wall that read, “Each person we see is fighting a battle that we know nothing about.” The gas station clerk told him simply, “Yeah… my boss wrote that.” Even though Richman chuckled when he told us this, he reminded the audience to keep the sentiment in mind as we went about our days.

Richman was about to end the evening, but then hurried back on stage saying he “had one more idea to try.” He struck up a song I’d never heard before, which, frankly, may have actually been made up on the spot. As Richman played guitar and sang “This love thing…” he had the audience respond back “…let me do it right!” This continued for three or four minutes, with Richman grinning happily. He then gathered up his maracas and guitar and gave the audience a quick wave as he and Larkins hopped off the stage.

Their tour continues in California, Oregon, and Washington in December.

Elizabeth Pearce is a Library Technician at the Ann Arbor District Library who drives a Dodge Veg-O-Matic.