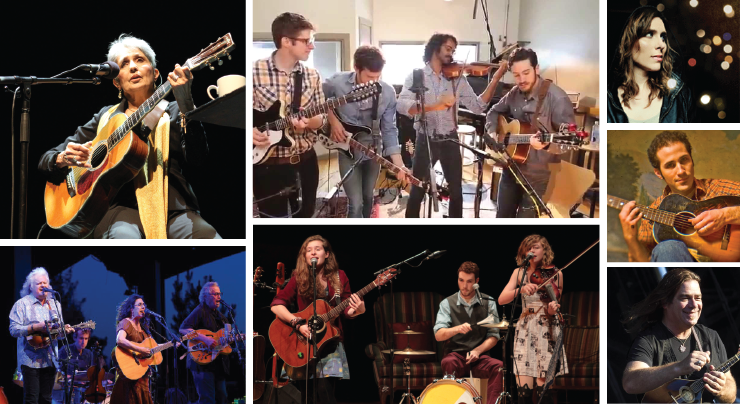 About this time of year, buzz begins to build among music lovers inside and outside of A2 as the lineup is announced for the Ann Arbor Folk Festival, and the 39th edition slated for January 29-30, 2016 at the Hill Auditorium is stacking up to be another blessed event. A brilliant stew is being cooked up for appreciative audiences of old and new music, mainstream and off-beat, regional, national, and international artists. Hosted by MCs David Mayfield (Friday) and John McCutcheon (Saturday), the Folk Festival 2016 lineup sets the bar very high.

For those who may mistakenly believe that after a 55 year career and 30 albums, Joan Baez has ceased to be relevant, one should only visit her latest original music in a recent album, Day After Tomorrow. You’ll understand that her voice, her words, her music are just as emotionally powerful today as they were in the 60s--yet wiser, richer, more circumspect, and just as damned beautiful as they were in that golden age.

Joan Baez recorded her first solo LP for Vanguard Records in the summer of 1960. Known more as an interpreter of songs than a songwriter, songs she introduced on her earliest albums would find their way into the repertoire of 60s rock stalwarts, like "House Of the Rising Sun" (The Animals), "John Riley" (The Byrds), "Babe, I'm Gonna Leave You" (Led Zeppelin), "What Have They Done To the Rain" (The Searchers), "Jackaroe" (Grateful Dead), and "Long Black Veil" (The Band), to name a few.

At a time in our country's history when it was neither safe nor fashionable, Joan put herself on the line countless times, and her life's work was mirrored in her music. She sang about freedom and Civil Rights everywhere, from the backs of flatbed trucks in Mississippi to the steps of the Lincoln Memorial at the Rev. Dr. Martin Luther King's March on Washington in 1963. That was also the year she helped introduce Bob Dylan to the world, continuing a line of folk royalty beginning with Woody Guthrie, Pete Seeger, and others that dared to challenge that which they knew in their hearts was wrong or flawed.

Ricky Skaggs has often said he’s “just trying to make a living” doing what he loves to do, which is being one of the best mandolin players in the world and an icon of Bluegrass and Country music. Since he first collected a paycheck as a 7-year-old on Flatt and Scruggs’ TV show in 1961, Ricky has been doing just that...and creating marvelous collaborations with some of the world’s best musicians in and out of the country categories. Singing, songwriting, and playing--not only on mando but fiddle and guitar as well--he helped bring back a sense of tradition and history to the scene beginning in the 1980s. Chet Atkins once said that Ricky Skaggs “singlehandedly saved Country Music”.

As a “musician’s musician”, it’s easier to tell you who Ry Cooder has NOT played with than to tell you whose music he has made immeasurably better. Cooder's trademark slide guitar work has graced the recordings of such artists as Captain Beefheart, Randy Newman, Little Feat, Van Dyke Parks, the Rolling Stones, Taj Mahal, and Gordon Lightfoot. More than a dozen film scores also grace Cooder’s résumé, including Crossroads and Primary Colors.

And now, Ricky Skaggs joins with Sharon and Ry to deliver a revelatory program of blues, gospel, and bluegrass music. They will be joined by Joachim Cooder (son of Ry) on drums, and Mark Fain on bass. I caught this supergroup in Nashville in September at the AmericanaFest, and you can tell, beyond any stage smiles, that they are having an absolute blast playing together.

I first heard Josh Davis playing with one of Michigan’s favorite roots bands, Steppin’ In It, in 2008, and since then I’ve been waiting for them to blow up. They haven’t, but front man Joshua Davis caught a break on The Voice and found himself in the TV series’ finals last spring. Since then, Joshua’s infectious smile and genuine voice have earned him a wide following and a place on Saturday’s Folk Fest slate.

Davis has released three critically acclaimed solo albums, five albums with Steppin' In It, and a record of jazz standards with Shout Sister Shout. His most recent album, A Miracle of Birds, is inspired by his travels in the Palestinian West Bank with non-profit organization On the Ground. About the album, Revue magazine says, "His heartfelt documentation of 'people as people' offers up compassionate songs of hope, darkness, and perseverance."

A pair of the most expressive (and twinkly) eyes you’ve ever seen will draw you into Joshua, and you will realize why America came to love him on The Voice. His musicality, songwriting, and passion will convince you that he’s no media heartthrob of the moment.

Alan Doyle last took the stage at the Ann Arbor Folk Fest in 2000 as the lead singer and co-founder of Great Big Sea, one of Newfoundland’s most renowned musical exports. GBS made its latest return to Ann Arbor to a packed house of rabid, lyric-screaming fans at the Michigan Theater in 2013. He released a first solo album, Boy on Bridge, in 2012, and has followed up in 2015 with his latest, So Let’s Go.

With musical roots in his native land’s lyrics, melodies, and rhythms, Doyle mixes traditional Newfoundland music with a fresh pop sensibility, and presents a variety of lyrical and musical platforms in his latest work, from the whiskey-scented shanty sounds of "1,2,3,4" to the urbanized Canuck country pop of "Sins of Saturday Night". Doyle and his talented supporting band Beautiful Gypsies are sure to keep the Folk Fest faithful chanting, rocking...even standing (OMG), conjuring musical images of a Barenaked Ladies / Enter The Haggis mashup.

After six years of playing together and a decade-plus of knowing each other, the collaborative process for Darlingside has evolved side by side with their friendships. “We’ve become intimate with each other’s childhoods, families, fears, goals, insecurities, and body odors,” says violinist/mandolinist Auyon Mukharji. The four Connecticut-based musicians and singers opened for Patty Griffin at the Power Center on October 10, and my buddy Stan had tickets waiting for us. We were cautioned by friends familiar with Darlingside to be sure to be seated for the opening act. That was a challenge, considering that we had to double-time it on foot from the Big House after the Northwestern game to make the curtain in time.

The quiet yet powerful vocals of the group are what first capture you. It’s clear that these guys have been singing together--tightly and sweetly--for about a decade to expertly blend complex harmonies as they do. Birds Say is their second album effort, or third if you count their 2010 EP, and forms the backbone of their live set. Their vocal and instrumental mastery is at evidence on every track, from the haunting "White Horses" to the perplexing "Harrison Ford" (the latter about a meeting/fantasy with a man who looks like their personal hero, Harrison Ford).

We will definitely warm to Darlingside at the 2016 Folk Fest...and Patty Griffin will soon need to find a new opener.

Rose Cousins is another Canadian import to the festival, originally from Prince Edward Island and now living in Halifax. This singer-songwriter has captured nearly every significant honor and award that her native country has to offer for her craft, and, here in America, her latest recorded work, We Have Made A Spark, was named to NPR’s Top 10 Americana & Folk Albums of 2012.

Rose will be sure to bring a quieter, more contemplative tone to the Folk Fest...she is often a solitary figure at a gently played piano. Or, she’ll surprise you with a lilting, curiously waltz-tempo version of Tina Turner’s 80s classic "What’s Love Got To Do With It". First reaction: huh? On second thought: a new appreciation for that pop song.

Seldom have I been as excited--nor heard as much buzz--as I have for these two brilliant young women. The Accidentals are Katie Larson and Savannah Buist, supported by percussionist Michael Dause. Katie and Savannah are little more than a year out of high school--albeit the prestigious Interlochen Arts Academy. They play no less than 12 instruments between them during a typical live set. Their lyrics are wiser than their years. And together, these Traverse City natives may be one of the acts most likely to succeed in a big way in the next few years.

Of all the artists I have written about for the Folk Fest, I have the hardest time describing the kind of music they play. I’m not even going to try. Just consider The Accidentals to be at a very special nexus of genres and generations that makes them much, much more than the sum of their very musical parts.

The Ann Arbor Folk Fest is well known for bringing lesser-known Michigan-based acts into the national spotlight. Thing is, The Accidentals may not need the help. They’re touring out west right now, and when they’re through, the Hill won’t be able to hold all their new fans.

For samples of what you'll hear at Hill, check out this Spotify mix of the latest releases from all the Ann Arbor Folk Festival artists.

The Ann Arbor Folk Festival comes to Hill Auditorium January 29 & 30. Tickets go on sale for the general public starting December 1 and can be purchased online, by phone at 734-763-TKTS, or in person at the Michigan Union Ticket Office and The Ark box office.