You're Dreaming of a Tuba Christmas 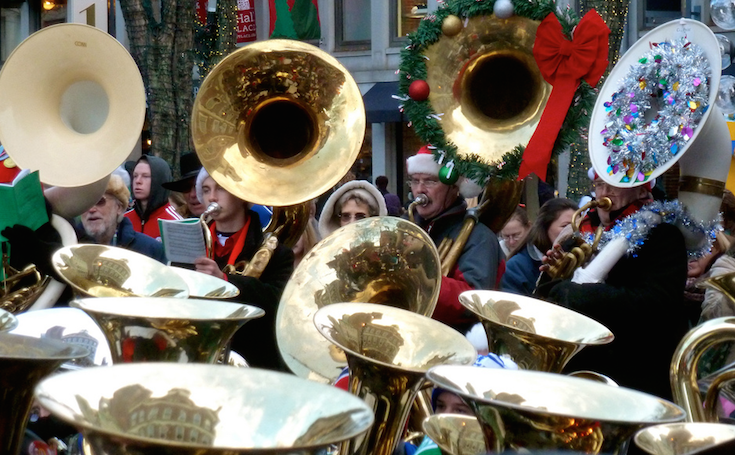 TUBACHRISTMAS was created by Master Tubist Harvey Williams in 1974 as a tribute to his Tuba Sensei, the legendary William J. Bell, who played for Sousa himself and was a foundational part of the rise of Tuba & Euphonium ensembles and repertoire. Now in its 42nd year, TUBACHRISTMAS is a low-stakes collision of Tuba and Euphonium players in 174 cities around the world to play Christmas music arranged for Tuba & Euphonium Ensemble. Irresistible, right?

Well, you'll get your chance to attempt to resist it this Sunday, December 6, at Kerrytown, as TUBACHRISTMAS Ann Arbor descends upon the Farmer's Market for a 2 pm performance, led by local Tubist George Thompson. The Observer covered the 2013 debut of TUBACHRISTMAS at Kerrytown, and they had to admit that "People who expect that a large group of tubas could only produce a loud, murky rumbling are in for a surprise."

TUBACHRISTMAS only comes once a year; don't miss your chance to be blown away by what Tubas can do!

Eli Neiburger is Deputy Director for the Ann Arbor District Library and was responsible for dubbing the Michigan Marching Band Sousaphone Section "The Great Hammers of Thor" after a throwaway line from an episode of Buck Rogers.