I'm Dreaming of a Sing-Along Christmas 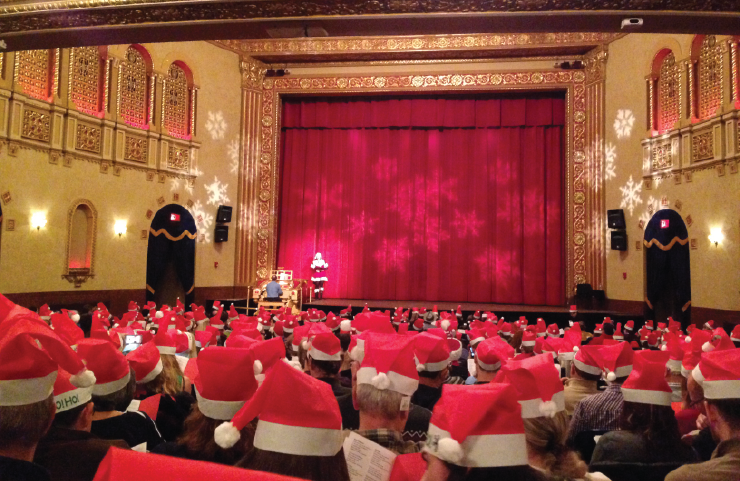 The Friday after Thanksgiving, there was no more festive place for a musical lover to be than the Michigan Theater for their annual White Christmas Sing-Along.

If you're not familiar with one of my favorite movies, that's ok--I'll tell you all the best things about it:
- The oddball phrases that Bing Crosby used in real life were added into the script, which is how his character comes to call a holiday celebration a "yuletide clambake" and refer to Danny Kaye's character as a "weirdsmobile."
- Vera Ellen's character only wears turtlenecks. Whether she's clad in an evening gown, a bathrobe, or anything in between, it's a turtleneck. She has about 30 costume changes. All turtlenecks.
- That indoor fireplace at the Columbia Inn
- Danny Kaye
- There's no bad guy. The film's primary antagonist is the lack of snow in Vermont.

The sing-along is a happy, silly, and friendly event, where people in the next row up offer to take a photo of you and your friends before the show starts. The jolly atmosphere is fueled in part by singing along with a selection of Christmas carols accompanied by the theater's prized Barton organ, and in part by the goodie bag given to each attendee, which includes an extremely stylish Santa hat that almost every audience member wears throughout the whole movie.

The emcee of the event wears a Mrs. Claus dress that looks like an update of the Haynes sisters' dresses from the Christmas tree finale scene. She sings along with the carols and the movie, and this year, conducted impromptu "fabulous holiday sweater" and "White Christmas costume" parades. After spotting many festively-dressed folks in the crowd, she invited holiday sweater-wearers up to the stage to show off their fashionable knitwear. But the crowd was most appreciative of the dozen or so White Christmas cosplayers. There was a gentleman wearing Danny Kaye's costume from the "Choreography" number, two very clever costumers dressed as the butcher and the cobbler from the civilian clothes finale of "Gee, I Wish I Was Back in the Army," and a couple who dressed in approximations of the "Sisters" wardrobe, one in the Haynes sisters style and the other inspired by Bob and Phil's famous lip-sync reprise.

The watching of the movie is punctuated with enthusiastic singing from the audience, with help from the lyrics captioning each musical number, and also with props from the goodie bags. They contained the following items:

-The aforementioned Santa hat - for establishing that this event is as cheerful as it is positively goofy
-A candy cane - for eating
-A snowflake sticker - for wearing
-Bubbles - to blow during the "Snow" song and at the finale
-Plastic horse - to trot out each time Betty mentions her knight-on-a-white-horse expectations of romance
-Blue feather - to garnish your personal rendition of "Sisters," which is played no fewer than three times
-Hand clappers - this plastic toy came in super-handy to chime in whenever there is on-screen audience applause, or an energetic bout of tap-dancing.
-Glow sticks - these red or green glow sticks were for swaying along with the ballads, most notably "White Christmas" but also "Count Your Blessings" and "Love, You Didn't Do Right By Me"
-Popper - these tiny firecrackers accompany General Waverly in blowing out the candles on the cake celebrating the reunion of his admiring Army division
-A tissue - to pull out and emote along with Emma the busybody housekeeper. Pro tip: keep this tissue handy for whenever the General tells his men how much they mean to him

Sara Wedell is a Production Librarian at AADL and she likes the song/dance number "Gee, I Wish I Was Back in the Army" best.