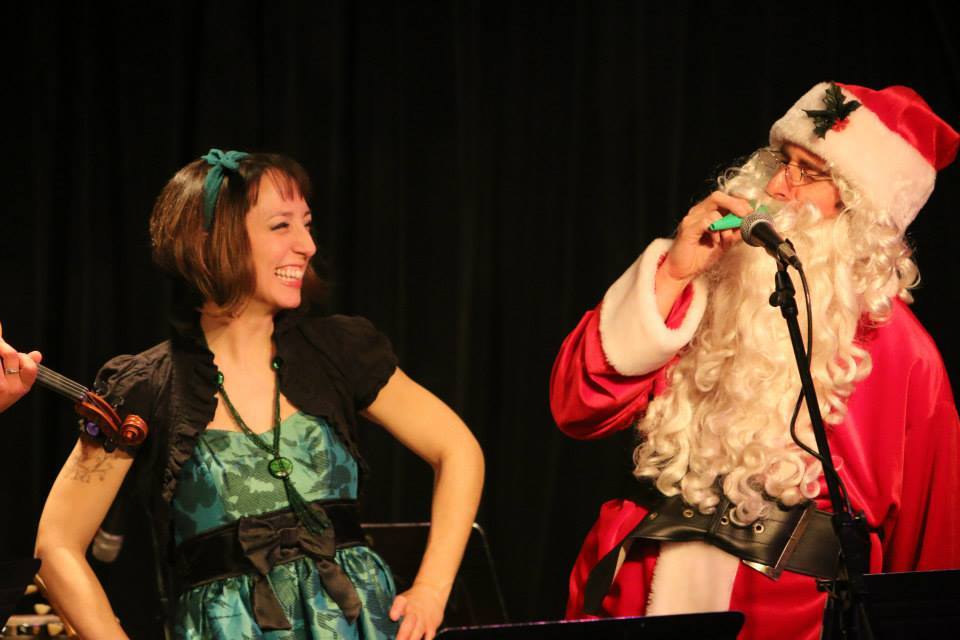 Ebird and Friends bring their Holiday Show to the Ark

The annual Ebird and Friends Holiday Show may not have quite the legacy of the University Musical Society’s annual presentation of Handel’s Messiah. But in its eighth year the revue-style concert has quickly joined the ranks of Ann Arbor’s holiday traditions. The show’s moniker originates from the nickname of its creator, Ann Arbor musician Erin Zindle, best known as the front woman of folk group the Ragbirds. Zindle organized the first Ebird and Friends show in 2008 at Hartland Music Hall, and she has fronted the show’s backing band in each subsequent year. The show’s lineup features a diverse range of local artists presenting unique takes on classic Christmas songs, as well as original holiday tunes. This year local audiences will have three opportunities to see the show: Dec. 11 and 12 at the Ark, and Dec. 13 at Hartland High School’s auditorium. Pulp chatted with Zindle about the origins of Ebird and Friends, why Christmas music is so special to her and what we should be looking forward to at this year’s show.

Q: How did the first Ebird and Friends show come together?
A: My dad has lots of brothers and sisters, so the only time of year the whole family would gather consistently was on Christmas Eve. And my favorite part of that gathering was singing. We would do food and gifts and I would kind of rush through that stuff because I really, honestly, even just as a young child, just was so excited about singing in harmony together with my family. It was such a special thing to me growing up, and as I got older we just stopped doing that. I realized how much that impacted me as a young musician. It was the first time I acknowledged music as a community experience–as a community-building experience, even, and I just really longed for that. I live far away from my family now, but I have this wonderful musical family in Michigan, in Ann Arbor. It was a pretty natural extension of that to try to start that here. The first year I just called all my musician friends and just was like, “We all love each other and all say how much we want to band together. Well, let’s make it happen.”

Q: How do you select the artists for the show? Do you try to balance various genres or musical styles, or is it mostly just based on bringing in as many folks as are available?
A: It’s a really selective process. There are so many amazing artists that I honestly call friends and just love and respect so much in this area that there’s too many to pick from. I always have a way bigger list to start with than who I can actually involve in the show. It’s a really hard choice. But I usually don’t have the same artists more than two years in the show, just to keep changing it up. I try to find somebody who can hold down the funk and somebody who’s got old-timey-style folk and somebody who’s a little more jazzy and somebody who’s just a local dynamo that can blow everybody away. So I’ve got certain spots I’m trying to fill, in a way.

Q: How do you go about rehearsing for something like this? Do you make time when you can to rehearse with each act individually, or do you usually pull the whole group together to run through it?
A: We have a horn sectional and a string sectional. The harmony girls will get together and work out their parts individually. We’ll do one rehearsal with just the house band, and then we all get together just once. So many of the musicians have just that one rehearsal, where we’re just jumping in and trying to get through everything in one night. It’s a marathon rehearsal and it’s a big party and it’s awesome.

Q: Christmas music can get kind of a bad rap, but such a diverse range of artists from around our community seem to really embrace it in this show. What do you enjoy about performing Christmas music and why do you think it holds such an appeal for your fellow performers in this show?
A: I think that many of the songs have a message of getting together and peace on earth and celebrating joy and light and happiness. There’s a positive message to most Christmas songs, even though some are totally cheesy about that. There’s something about having a body of work in our collective culture that we all know. We can all sing “Jingle Bells” together. We all know it, no matter where we grew up or how we were raised or what our culture is, even our religion. We all know it. And I just think it’s a good starting place as far as getting artists to come together and be creative around a theme. It’s really a perfect choice in that way.

Q: What are you particularly excited about with regards to this year’s show?
A: The Accidentals have a brand-new original tune they’re going to be debuting. Olivia Millerschin is a really cool, fresh, young artist on the scene. She was one of my songwriting students up at Interlochen and she’s really been making waves with her career. I’m excited to have her as part of the show this year, also doing an original song. I could go on and on because there’s a lot of cool things in store, but I don’t want to give it away.