Review: The Light in the Piazza, University of Michigan School of Music, Theatre and Dance 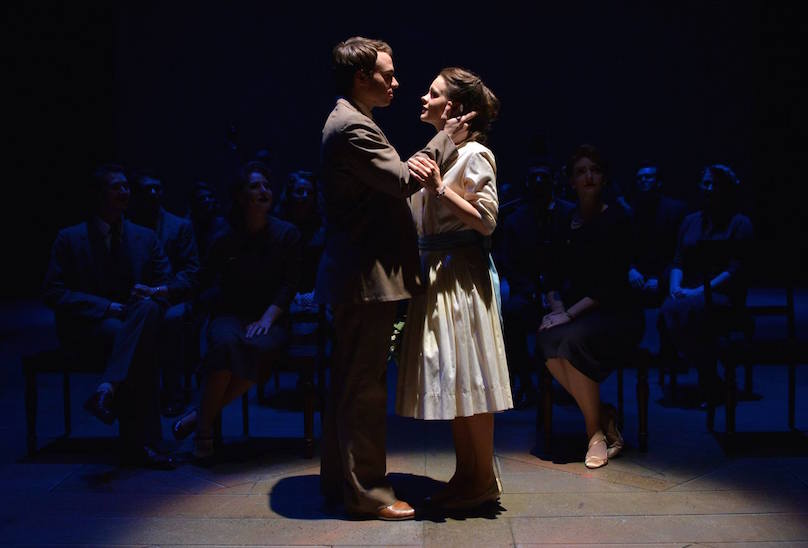 The University of Michigan School of Music, Theatre, and Dance loves to boast about the many graduates who are making a name for themselves on Broadway and in regional theaters across the country.

A new production of The Light in the Piazza at the Arthur Miller Theatre on the UM North Campus just might add significantly to that list. An uniformly outstanding cast gives life to a musically challenging work that is at times comic, romantic, and richly melodramatic.

The musical with book by Craig Lucas and music and lyrics by Adam Guettel is base on a 1959 novella by Elizabeth Spencer about a mother and daughter trip to Italy. The time and lush setting suggest the romantic, Technicolor movie melodramas of the 1950s in which a family secret creates a tension that can only be resolved through love.

The UM production on the intimate Miller stage leaves the splendor of Florence, Italy, to the audience's imagination (for how could it ever be presented on a stage). The stage is bare except for chairs, a table and, in one key scene, a bed. These are moved about fluidly by the ensemble cast who remain on stage as a chorus of Florentines. The small orchestra is also on stage. Up front a common story plays out. Mother and daughter go to Italy, where once upon a time the mother and her husband had a carefree holiday before the realities of business and life intruded. The pretty but fragile daughter finds romance with a passionate young suitor from an equally passionate Italian family.

The "secret" is a childhood injury that has left the young girl mildly developmentally impaired. But this is the 1950s, and her parents want to protect her, or is it control her. A mother-daughter struggle ensues.

This is not your typical musical comedy. The music is rich and varied, moving from the lift of a jazz combo to the complex drama of grand opera. Music director Catherine A. Walker leads a five member orchestra through the score superbly. Walker also plays beautiful piano from boogie-woogie to rising romantic flourishes. This is not the kind of show in which you leave whistling a tune, but the songs musically and lyrically capture the range of emotions that are at the heart of the show.

The cast is challenged in unusual ways. The songs are in English and Italian. Some cast members must sing and speak in Italian and in the halting English we associate with Italian immigrants. They must also move easily from operatic passion to quietly tender emotion to joyful humor. Guest director Brian Hill makes it all work seamlessly. He has his young cast performing beyond their years and capturing every nuance of a richly nuanced play.

Christina Maxwell plays the delicate, charming daughter Clara. She perfectly captures the sweet innocent early on and the fierce young woman trying to make a life of her own as the story develops. He voice is sweet but, even in the tight confines of the Miller, needs more projection.

The Naccarelli family are a joy, even as they embody a variety of well-worn Italian stereotypes. Luke Steinhauer as Fabrizio, the suitor, is magnificently over the top in love. His "Il Mondo Era Vuoto" is at once passionate but outrageous and the reactions of his more knowing brother and father are hilarious. Ben Bogen is the philandering brother Giuseppe, quick and lively, who distracts his brother with a little jazz. Liesl Collazo is Giuseppe's tart-tongued, jealous but passionate wife and family translator, who also believes in love. David Barnes is suave and precise as the family patriarch who falls to the charms of Clara's mother and has a sweet duet with her. Kalia Medeiros brings spark to a giddy scene where she provides an explanation for what's going on when a family argument ensues in raucously rapid Italian.

But in this uniformly fine cast, one member stands out. Kaity Paschetto gives a star performance as Margaret, Clara's caring but tense mother. Paschetto resembles a young Angela Lansbury and seems to move as easily from comedy to drama to musical expression as that esteemed actress does. Her singing voice is bright, expressive, and emotional. She expresses excellent comic timing in her efforts to put off the suitor without causing a scene. But her best scenes are her sad encounters with her angry daughter and her long-distance conversations with an estranged husband (Charlie Patterson).