The Other Kind of "Pop" Music: A2SO's Holiday Pops 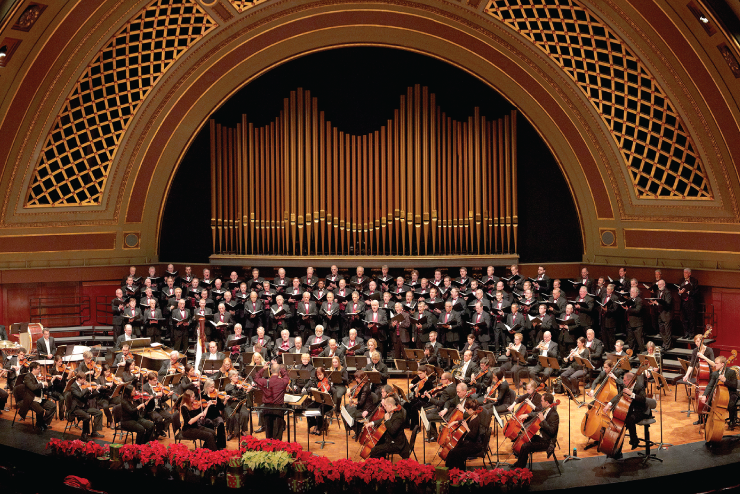 On December 11th the Ann Arbor Symphony Orchestra celebrated the Christmas season with their 4th annual Holiday Pops performance. Combining music, song, and some audience-provided sound effects, the show captured all the best things about the holidays: cheer, togetherness, and good music.

I went in expecting the good music, so I wasn’t surprised when they started with some classic wintery waltzes, ballet pieces, and a host of other refined orchestral numbers that made me feel like I should have worn fancier clothes. It was beautiful and stirring and, after getting over the amazing sight of the instruments at work, I listened to most of it with my eyes closed. But I was pleasantly surprised a few songs in when the show revealed itself for what it really was—pure holiday ridiculousness in a fancy suit.

The conductor took a break from his straight-laced conducting for some charming holiday banter, ironically reminding the audience to go out and play in the snow and to see the heart-warming holiday film “Krampus.” Then he and the orchestra launched into a second wave of pieces that were just as beautiful, but far jollier. One song that perfectly combined the feeling of sophisticated symphony with festive silliness was the “Champagne Gallop,” an upbeat piece that included regular pauses for an exuberant “pop!” sound, mimicking the popping of a champagne cork. Technically, this sound was supposed to be made by the percussion section—but what fun would that be? Instead, the conductor asked the audience to create the popping sound themselves with the trusty finger-in-the-mouth trick. Suddenly, a song that would have been a pretty good time all by itself was made even better by the hilarious sound of 500 audience members making popping noises every time the conductor waved his hand in our direction. It was, in a way, like being a part of the orchestra—if there was a section of the orchestra designated to ridiculous sounds you can make with your mouth.

But generally speaking, there is not. I checked.

Partway through the program, the orchestra opened its doors and ushered in a flood of choirs: the Boychoir of Ann Arbor, Measure for Measure, the Skyline High School Choir, the Ann Arbor Youth Chorale, and the Greenhills Choir. The orchestra’s performance was made all the more buoyant by the addition of song as each choir took its turn and, finally, joined the audience for a good, old-fashioned holiday sing-along. As the evening ended with the audience belting out verses of "Jingle Bells," "O Christmas Tree," and "We Wish You a Merry Christmas," the performance went through one last transformation, taking on the feel of a fun and cozy family get-together—complete with cheerful, off-key singing in my ear and children kicking the back of my seat.

Nicole Williams is a Production Librarian and she actually has no idea how to make that finger-in-the-mouth popping sound.

The Ann Arbor Symphony Orchestra's next big event will be their Mozart Birthday Bash at the Michigan Theatre on January 16th. Tickets are available online from their website.