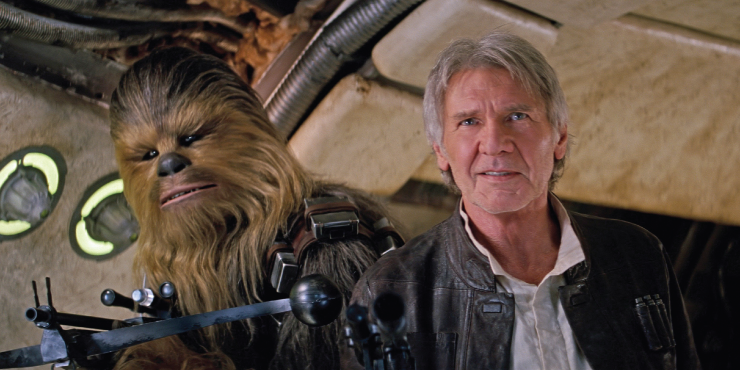 The Hairy Space-Bear and The Guy Who Wears The Leather Jacket were both in Star Wars: The Force Awakens.

Two weeks ago, the long-awaited Star Wars movie, The Force Awakens, hit theaters like a ton of space-bricks. Hordes of people of all different ages, all kinds of backgrounds, and varying levels of nerdiness flooded theaters on December 17th to see what this latest installment had to offer. They showed up to theaters two hours before the movie. They stood in lines that stretched out the door, around the corner, and possibly into the street. They ate popcorn by the bucketful and shouted over each other to answer the theater staff’s trivia questions and win free movie tickets (most likely for return trips to see this exact same movie). And, lucky me, I was one of the many, standing in line at 9 pm with my ticket in hand, waiting for the theater doors to open. There was really only one thing separating me from the eager crowd of fans humming with excitement around me:

I had never in my life seen a Star Wars movie.

I know. Suddenly my “space-bricks” comment makes a lot more sense, doesn’t it? I know exactly zero things about Star Wars, so for all I know space-bricks are totally relevant to this fandom.

I am fully aware that every person in the world has seen Star Wars. I’m pretty sure they screen it for newborn babies in the maternity wards at hospitals. It’s been around for almost 40 years, but somehow I had managed to stumble through life without ever seeing it. I never accidentally watched one while at a friend's house or in a waiting room or settled on one while flipping through channels—you know, back in 2008 when people still had cable.

So when the new movie came out, and friends invited me along, I decided, “Yeah, ok. That could work. How important is it REALLY to have seen the other movies? I mean, I know stuff about Star Wars.”

This line of thinking was pure folly. A group of Star Wars-loving co-workers showed me just how wrong I was with an informal, pre-movie interview. Here are the things I “knew” about Star Wars before seeing the movie - spoilers ahead, but only for people as Star Wars-sheltered as me:

[begin embarrassing transcript]
So, what are you pretty sure you already know about Star Wars?
Luke and Darth Vader are related.

They sometimes fly around in ships and shoot at things, like giant desert rats.

One of the planets is, like, a desert planet.

Han Solo shot first. The internet was pretty adamant about that one.

Yoda talks funny and is green and small and…him and Luke were buds?

Jar Jar Binks is a gold robot. No, wait, he's the guy with the weird face!

There's a scene where there's deserts! Or planets.

Ok, what do you know about the general plot of Star Wars? Give us a summary.
Luke Skywalker is the Chosen One of some kind. He lives on a planet that is not Earth and fights some dudes. Not really sure about his motivation. He hangs out with Yoda and Han Solo and they teach him how to use a lightsaber. He goes to fight Darth Vader because no one likes that guy. They go to the Death Star, which is round and has a dent in it. Darth Vader wants to kill him for... reasons? Then there are storm troopers and they wear white and there are other kinds of storm troopers that look similar but are different. And they fight them? And they win? And Darth Vader dies? But first he says "Luke, I am your father." And that's all I know.

Who is Jabba the Hutt?
He's a fat guy who has Leia in a gold bikini. I know that because of Friends. Wait, is that guy blue?

What do you know about Boba Fett?
I don't remember. Is he an alien? He's not a person. Not as crazy looking as Jar Jar Binks. Is he a robot?

How do you think the ewoks enter into this?
Oh. Yeah. Is Chewbacca an ewok? They are some sort of space animal…that are either Chewbacca or…I'm imagining them smaller? Like the footstool in Beauty and the Beast. You know that little dog?

Who is Anakin Skywalker?
That one I know! That guy is Darth Vader. He was a nice guy once and then his face got jacked up. So under his mask he has a jacked up face. What's his motivation? What's that guy up to? Is he trying to take over the universe? People are always trying to do that.

Who's the Emperor?
Is that different than Darth Vader?

Who is Lando Calrissian?
He is from across the Narrow Sea and has dragons and wants the Iron Throne?

Who does Natalie Portman play?
She was Princess Leia, right?

What is the Force?
It's like chi? Energy. You use it for... fighting? With lightsabers? You should use it. I know you use it. And also that sometimes it is with you. Can it be good or bad? I think it's good.

What's a Jedi?
Oh, a Jedi is like an auror in Harry Potter. They fight crime and stuff and they wear brown robes. Also like Harry Potter! Wait, lightsaber color is important. I don't know why I know that. Do they have different powers? Do people have powers in this movie? Um, I know Jedis can return. They went somewhere and came back. Is Jedi plural? I think it's a job.

Yup. So, clearly I was starting on a solid foundation of very correct facts. I’m pretty sure by the end of the conversation, I was just directly quoting from movie titles. I am still not totally sure how wrong my information was, but I could kind of gauge it by how horrified my co-workers looked after each answer.

And so, armed with all of this very factual knowledge, I went to see the seventh Star Wars movie. I waited in line for two hours with a horde of die-hard Star Wars fans wearing quippy t-shirts. Some were dressed up as That One Character Who Wears Gray, or That Person With the Brown Clothes, or Princess Leia (nailed it). And lots of them were toting around what I thought at the time was some kind of zany orange and white space-hat (but was apparently a robot called BB-8). I watched my Star Wars-obsessed friends answer trivia questions and yell at a guy who dared to wear a shirt with a Star Trek font. I ate two pretzels.

And then it was finally time for the movie. We flooded into the theater, the lights went out, and the magic began.

Considering that I barely knew who anyone was or what was going on, the movie kept me completely hooked from beginning to end--aside from a very brief couple of seconds when I fell asleep because, well, it was almost midnight and I was basically full of pretzel cheese.

I thought the movie was funny, exciting, and incredibly realistic for a space opera. Spaceship chases? Yes, please! Lightsaber fights? Bring 'em on! But there were also real feelings, real relationships, and real stakes in this movie. Who'd have thought?

The main characters were just impossible not to root for. Finn, the stormtrooper who's been trained to kill for the dark side, but decides run off and fight for the Resistance; Rey, the clever, solitary junkyard girl who accidentally gets swept into this epic battle between good and evil; and BB-8, the world's most adorable space-hat, who is being hunted by the Republic.

Now, I'm not sure if a stormtrooper turning his back on the dark side and running away to fight for good is something that has ever happened in the Star Wars universe. If I'm honest, before Finn pulled off his helmet in the movie I didn't even realize stormtroopers were people. If I'm really, really honest, I didn't even know stormtrooper was one word. But the revelation that stormtroopers could have feelings and weren't all just soulless killing robots felt like a pretty new and exciting leap in character development to me--and a pretty cool introduction to the universe. All my preconceived notions, few though they were, were just blown to bits and suddenly it felt like anything could happen. If stormtroopers could be good maybe C-3PO would pull off his face to reveal that he's the Emperor. The possibilities were endless!

Rey was a joy to watch as she went from impoverished junkyard scavenger to lightsaber-wielding, butt-kicking fighter for the Resistance, and her chemistry and banter with Han Solo was so much fun. Kylo Ren, with his motivations and backstory left intentionally foggy, managed to seem well-rounded, and the relationships that were hinted at gave his character some great depth. As far as I can tell, Star Wars isn't known for making two-dimensional villains, and they certainly haven't started with Kylo Ren.

These allusions to histories and relationships between the movie's characters felt like completely new revelations, not old references that I just wasn't getting. But it was interesting how easy it was to pick up on the things that were old inside jokes. I didn't get any of them, of course, but I could tell when some classic Star Wars thing had happened because suddenly the camera would pan around to a nondescript, decrepit spaceship and everyone would start screaming and cheering. Or Han Solo would stop and say something completely unremarkable and the entire theater would explode into laughter and applause.

The combination of old references and new information made something incredibly clear, though. While I could probably say that Star Wars: The Force Awakens was a good movie--I enjoyed seeing it and only fell asleep the one time--it would be impossible for me to say just how good it was without having seen the other beloved (and less-beloved) films in the series. Are these ideas, these characters, these plot lines original and revolutionary and surprising, or are they overdone tropes? Are they carefully planned and well-thought-out tie-ins to plot lines from the previous movies or have they kicked the old plot lines to the curb? Is this the continuation of one great big, epic story or an entirely new story with some familiar faces tacked on?

On a great big list of "Things I Don't Know About Star Wars," these questions have all risen to the top. Right below the biggest question of all: Was Star Wars: The Force Awakens really a good movie?

I think so. But I can't know for sure until I've seen the rest. And so, with the next movie in the franchise looming on the horizon, it might be time to give in to the gravitational pull of the Star Wars universe and just…watch the movies already.

Nicole Williams is a Production Librarian at the Ann Arbor District Library and if she had to rename The Force Awakens, she would call it Star Wars: Stormtroopers Have Feelings Too. Or maybe, Star Wars: Everyone In Space Has Daddy Issues.

Star Wars: The Force Awakens is in theaters everywhere, all the time.