R.J. Fox Turned His Life into Art and Wants to Teach You to do the Same 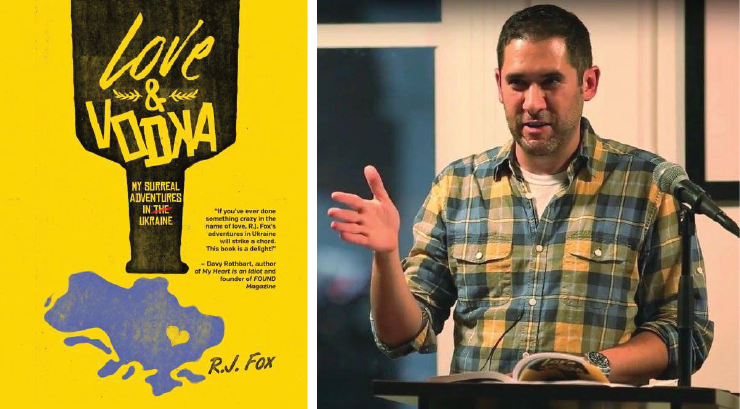 R.J. Fox will discuss how to craft a memoir at the Ann Arbor District Library.

Once upon a time, an aspiring writer/filmmaker named R.J. Fox traveled to Hollywood, California to attend a series of screenwriting workshops. During a cold and rainy day off, he decided to visit Universal Studios. And that was where he first met Katya from Ukraine. They became pen pals and several months later—on a whim and without telling another living soul—he purchased an engagement ring and traveled halfway around the world to propose. Fox’s adventures in Ukraine are documented in his new book Love & Vodka: My Surreal Adventures in Ukraine.

This humorous, poignant, and memorable expedition centered on life in Dnipropetrovsk, Ukraine—the former center of Cold War Soviet missile production and a city that, until the mid-1980s, was closed to foreign visitors—is punctuated by a colorful cast of characters, adventures, and cultural mishaps and misunderstandings, from irate babushka women to hard-drinking uncles. He talks about the experience in more detail and reads from his book in his December appearance on Michigan Radio’s Stateside with Cynthia Canty.

As Ann Arbor native Davy Rothbart, author of My Heart is an Idiot and founder of FOUND Magazine , says, "Love & Vodka is an honest, funny, and deeply heartfelt story about a young man who drops everything to pursue an epic romance. If you’ve ever done something crazy in the name of love, R.J. Fox’s adventures in Ukraine will strike a chord. This book is a delight!”

Fox, currently an English and media teacher at Huron High School, is also the award-winning writer of several short stories, plays, poems, and fifteen feature-length screenplays. Two of his screenplays have been optioned to Hollywood.

On Monday, January 11 at 6:30 pm, Fox will teach a memoir-writing workshop at the Downtown Library, where participants can learn to mold their own stories using topics like story structure, dialogue, character development/arc, and how to infuse your writing with literary elements traditionally associated with fiction. Participants will apply the skills taught during the workshop through various prompts and activities designed to spark creativity, with the aim of mining material that can later be developed into various forms of memoir and creative non-fiction, from short essays to long-form works. Copies of Love & Vodka will be available for purchase and signing.

Patty Smith is a desk clerk at the Ann Arbor District Library.

R.J. Fox's talk, Memoir Writing:Turning Your Life into Art (Or is it the Other Way Around?) will be presented in the Multi-Purpose Room in the Lower Level of the Downtown Library at 343 S. Fifth Avenue on Monday, January 11 from 6:30-8:30 pm.