Review: Civic Theatre Cast Brings out Their Best for 'Company' 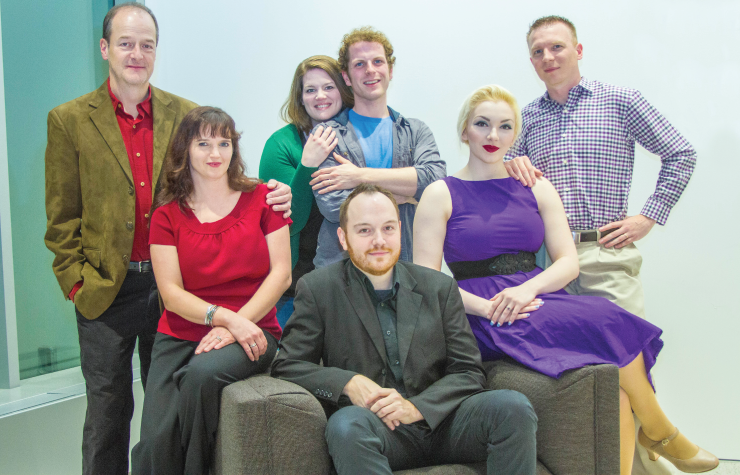 Company is a musically and lyrically intense exploration of love and marriage, at times rueful, funny, bitter and hopeful. The musical, with music and lyrics by Stephen Sondheim and book by George Furth, is musically challenging, lyrically intricate, and emotionally draining. The Ann Arbor Civic Theatre has taken on the challenge with an outstanding ensemble who seem to relish the rich variety and tonal changes of Sondheim's music.

Director Rachel Francisco notes in the program that the play has an odd structure. The center of attention is Bobby, an aging man-about-town who has reached his 35th birthday without settling into a serious relationship. He is surrounded by married friends who both envy and worry about him. Bobby visits these couples and struggles with who he is and who he is supposed to be. Francisco notes that the action seems to play out in Bobby's head, a meditation on life, ending with a desperate affirmation.

Company is well named as the play provides spotlight moments for many in the cast, each song keying in on some aspect of love and marriage. Francisco and musical director Jennifer Goltz keep it fluid, moving easily from moments of slapstick humor to quiet introspection. Sondheim draws on jazz, the blues, and musical theater models. His multi-voiced settings, complex lyrics at breakneck speed, and his shifts in style are a challenge. Goltz gets the best from the singers and leads a small combo in a solid musical accompaniment.

At the center is Robby Griswold as Bobby. He is our guide through this mid-life crisis. He is charming, boyish, but also visibly aching for something else...or is he? Griswold is the glue that binds everything with his nuanced performance and his rich, intelligent singing. He wonders about the limits of intimacy in the reflective "Marry Me a Little." His rendition of "Being Alive" is strong, sad but triumphant.

But, of course, Bobby is not alone. He is surrounded and sometimes smothered by the affection of his friends.

Harry and Sarah seem happily married, even as they engage in a little karate. Jodi-Renee Giron's Sarah is tough and funny. Harry may not be all that happy as he sings "Sorry-Grateful," one of the most mature reflections on marriage. Paul Clark as Harry has a strong voice that captures the rueful mood.

Marta, a bohemian girl, is one of three people with whom Bobby has off-and-on relations. Kate Papachristou has a voice that seems to rise above the others. Her Marta offers one explanation for Bobby's reluctance to get involved, the teeming, stimulating, maddening city of New York, in the frantic song, "Another Hundred People."

Another frantic song is from a bride in panic as the ceremony nears. Marci Rosenberg is hilarious as Amy, a woman in a longterm lesbian relationship who feels too much pressure to get married. Sondheim's "Getting Married Today," is a rapid fire musical stand-up routine that Rosenberg blazes through, while flailing across the stage hilariously. Her sweet-tempered, kind intended, Paula, is well played by Amanda Bynum.

April is another of Bobby's tentative love relationships. She's a stewardess, more noted for her beauty than her intellect, a definite bad mark from Bobby's female friends. Kimberly Elliott is funny and a little goofy as April and she and Griswold do a nice comic duet on "Barcelona".

A knock-out moment in Company is always Joanne's bitter observations on "The Ladies Who Lunch." Joanne and her third husband are a bit older than the crowd. As played by Amy Bogetto-Weinraub, she is a bit of a cougar, always on the hunt but more than a little sad about her situation. Her performance on "The Ladies" builds slowly to a savage, emotionally draining declaration that is more about self-loathing than gossip.

Others of note are Trisha Fountain as the square Jenny, Chris Joseph as the bisexual Bobby's sometimes boyfriend Kevin, and in the musical quartet, Greg Simon on trumpet and flugel.

Company continues Friday and Saturday at 8 p.m. and Sunday at 2 p.m. at the Arthur Miller.Arthur Miller Theatre, 1226 Murfin Ave, 48109. Tickets are available online at Ann Arbor Civic Theatre's website, by calling the A2CT office at 734-971-2228, or at the door. Additional information is available by visiting the theater's website.