Review: Juggernaut Jug Band takes us through a musical wormhole and back again 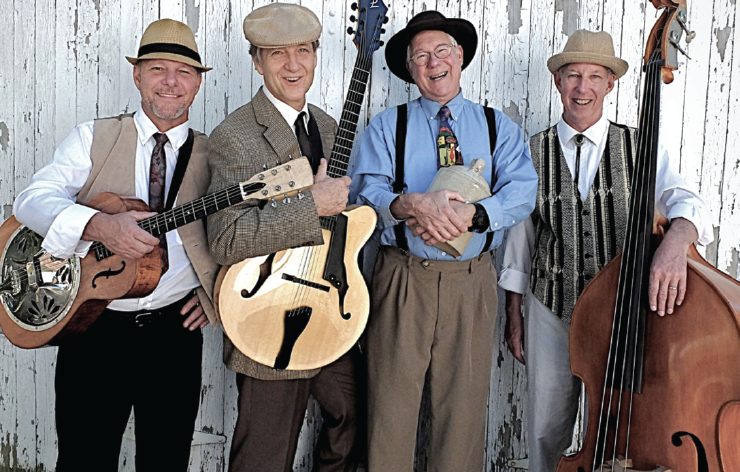 I’ve lived in Arbor for three and a half years now, and for someone who calls himself a “small music” fan, I haven’t gotten out often enough to visit all the great venues we have in and around town. The Green Wood Coffee House has been on my must-go list for some time now, and Friday night I walked in. Located at the United Methodist Church on Green Road, it’s an Ann Arbor institution of great live folk, roots, and Americana music, and the performance by the Juggernaut Jug Band did nothing but burnish that reputation.

I’d never heard of “JJB” or their music before last night, though I confess to being a lapsed practitioner of the washtub bass (it was a high school thing). There was no washtub there, but JJB frontman Stu “Roscoe P. Goose” Helm had at his disposal more than a dozen jug band instruments, most of them clamped to a red 4-foot step ladder. The star of the rhythm assortment was Roscoe’s ancient-looking crockery jug – a gallon-sized model – equipped with a 21st century wireless mic. This video provides a nice intro to JJB.

Louisville, Kentucky is considered the birthplace of jug band music: a goulash of Dixieland, honky-tonk, blues, jazz, minstrel, and swing that first bubbled up in the late 1800s. JJB’s primary calling is to preserve the jug band tradition and to expand the envelope of this sub-genre with modern musical infusions. Channeling past jug band ghosts like the Dixieland Jug Blowers, Whistler’s Jug Band, the Mud Gutters, and Ballad Chefs, JJB covers the best of traditional jug music, complete with washboard, cowbells, tin cans and nose flute.

But wait… there’s more! In addition to those original sounds, JJB samples modern rock in a jug band format that has the audience’s senses and sensibilities reeling – in a good way. Consider "Pinball Wizard"… played to the tune of "Folsom Prison Blues". Or a Led Zeppelin medley of "Heartbreaker", "Kashmir", and "Stairway to Heaven". These guys know how to turn a genre on its head, whether it’s theirs or any other. If you’ve not heard a jug band cover of "People Are Strange" by Jim Morrison and The Doors, you must seek this out immediately.

Before you write off JJB as a bells-and-whistles novelty group, you need to know that these guys are accomplished and talented multi-instrumentalists. Roscoe Goose surprised me by setting aside his washboard thimbles for a song and pulling out a muted silver trumpet in mid-set. Greg “Frankie” Lentz displayed his fretboard skills on an electrified Fender dreadnaught. Pat “Slim Chance” Lentz (Greg’s brother) strummed and picked a masterful electric jazz guitar of his own making – and alternated with a Dixieland banjo, while the newest member of the group, James “Jug Band Jimmy” Brown anchored the group with his stand-up bass. Members of the band have changed since its inception in the early 1960s, but the tradition, original sound, and corny jokes carry on. Roscoe Goose has been raking the washboard for JJB for more than 50 years.

What I absolutely did not expect from this group was the level of vocal skill and harmony-making reminiscent of good barbershop groups. Roscoe possesses a sweetly natural lead voice, and ranges easily down to the bass notes required for the jug. All of JJB’s members join in often for the choruses, and the lead singing role is occasionally thrown to “Slim”.

Catch Juggernaut Jug Band on their next trip through town (they promised), since no studio recording quite captures the look on Roscoe P. Goose’s face when he’s playing the nose flute on "Stairway to Heaven". Visit this Spotify link to sample their stuff. If you like it, BUY their music at the Juggernaut website. And thank you, Juggernaut Jug Band… for keeping musical history alive… and kicking!