Sometimes Pointless Things are Worth It: Pointless Brewery Opens in A2 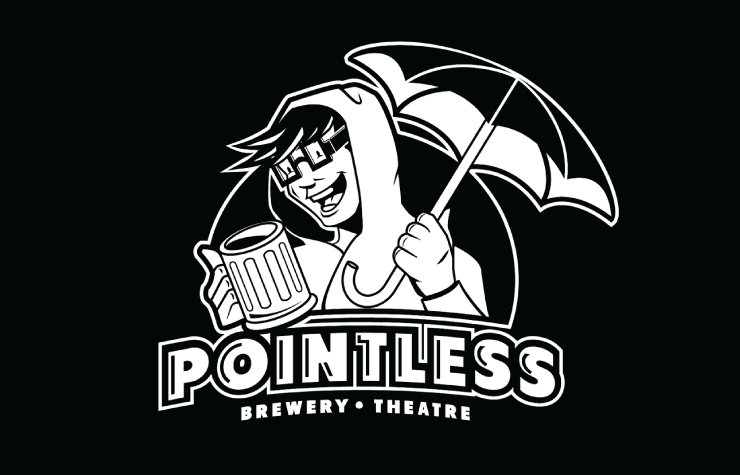 The Pointless Brewery opened in December, and it's so easy to make a pun about it that it almost feels poin--USELESS. Useless.

The pointless dreams of husband and wife team Jason and Tori Tomalia came true in mid-December as their Pointless Brewery & Theatre opened on Packard in Ann Arbor. The idea that had been brewing for over a decade came to fruition after Tori was diagnosed with stage IV lung cancer and they were asking themselves what the point of everything was.

The answer: sketch comedy and beer.

The brewery and theater offers a delightful combination of improv and craft beer made by the owner, and from my experience both were worth the ticket. The sketch comedy is provided by three different improv groups each night, including their resident group — The League of Pointless Improvisers. It is definitely more of a bar in a theater than a theater in a bar, as the long-form improv performances are the focus. The small space may have a small stage and a small bar but it has a giant heart – which creates a welcoming and relaxed environment for theater-goers. Owner and brewer Jason Tomalia is quick to tell you that if you feel like grabbing a beer or one of their made-in-Michigan snacks in the middle of the show, go right ahead.

Amanda Schott is a Library Technician at AADL and sometimes snorts when she laughs at improv comedy.


Improv Shows are Fridays at 8 pm, and Saturdays at 8 pm and 10:30 pm. For the kids there’s Little Peeps every Saturday morning at 10:30 am. It is part performance, part drama activities, and part crafts. And Sundays at 7 pm is open stage night where you can sign up to show off your own talents such as music, improv, poetry, etc. The theater also offers improv classes on site.
Sign in to comment