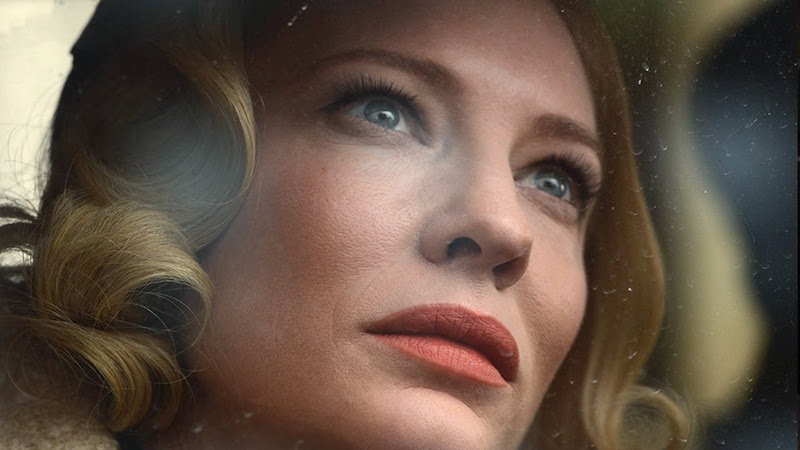 The film is adapted from Patricia Highsmith’s 1952 novel The Price of Salt (later re-published under the title Carol) about a romance between two women in 1950s New York. The book details a love affair between the young and lonely Therese, and Carol, a married woman facing divorce. Therese and Carol meet in a department store, quickly become attached to each other, and then travel cross-country to escape Carol’s familial stresses. Their situation grows increasingly complicated (no spoilers here, I promise, but there are moments of true surprise and devastation). In the end, love prevails.

I found the film to be stirring, evocative, and full of emotions that are all-at-once restrained and dynamic. Leading actresses Cate Blanchett (Carol) and Rooney Mara (Therese) demonstrate real ability, as they both perform their roles with careful and controlled intensity. The dialogue is sparse, so each spoken word carries weight. Therese and Carol often meet in public places, such as city cafés and sleepy small-town diners, where strangers don’t suspect the real intimacy of their relationship. As they speak guardedly, their true feelings towards each other are only revealed through their facial expressions. The film provides subjective shots of both women, close-up shots that frame their faces and highlight the blazing intensity in their eyes. This is how the audience too learns how these women feel about each other.

Some of the subjective close-ups reveal easily legible emotions. And as a viewer, it is satisfying to witness them so closely. Many of the shots, however, are composed in ways that disrupt the intelligibility of the women’s faces. Carol and Therese are often framed through windows. The effect is beautiful. Reflections become the foreground of the image, and their facial expressions recede. These images are richly layered, revealing colors and textures that provide substantive depth.

In an interview with Variety, the film’s cinematographer Edward Lachman said, “In a film there’s kind of a silence and moments of suspension. And this layering of images becomes kind of a subtext for their emotional states. They’re encapsulated in these cars where we see them from the outside and the reflection on the cars are what’s – let’ s say what the forces are outside of them.”

The layering complicates the images, making them more difficult to decipher. I appreciated these moments most! My eyes searched the images, looking to read facial expressions, but often paused to admire the grainy textures and washes of color.

The lush cinematography carries the film’s narrative, which moves slowly. Shot on Super-16mm film, with a muted color palette of greens, reds, and brown, the film evokes a period of time with visual accuracy, but also with the feeling of a dream. I recommend this film for those who appreciate classic love stories and period dramas. Carol offers stirring emotional experience – expect to see it nominated for several awards in the upcoming award season!

Elizabeth Wodzinski is a Desk Clerk at the Ann Arbor District Library and she would love to try on Cate Blanchett’s hats.