GIG: The Art of Michigan Music at the Ann Arbor Art Center.

If you pay any attention to local music, you know the Michigan scene is rich with diversity and talent. But as the Ann Arbor Art Center’s new show GIG: The Art of Michigan Music points out, there’s also a wealth of outstanding visual art inspired by local music. Visual art–whether an album cover, a concert photograph, a gig poster, or a T-shirt design–has a mighty influence on the way we interact with a band. Often it’s a deciding factor in whether we pick up that album or check out that show in the first place. But it’s rare that we really think about, let alone actively pay tribute to, the folks who made that art. With about 150 works by 20 different local artists, GIG at least gets a good start on giving those individuals a well-deserved tip of the hat.

The show is cleverly laid out in that it groups works not by artist but by theme, subject matter, and color scheme. There are few enough artists in GIG that each could easily be segregated into their own little stretch of wall. But it’s more interesting to take in a wall of Alice Cooper- or Kid Rock-related art, more interesting to explore a section of comic book-inspired illustrations for bands. There’s a pleasant surprise in realizing a group of works are related not necessarily by their creators, but by aesthetic qualities–sometimes different takes on the same subject material.

Within those varied groupings, certain artists consistently stand out. Ann Arbor photographer Doug Coombe has possibly shot more local bands over the past couple of decades than any other photog in town. His works in GIG repeatedly distinguish themselves not only for the diversity of bands Coombe has photographed, but the incredible eye he has for capturing them in striking moments and settings. Feast your eyes on his gorgeous black-and-white shot of Flint R&B artist Tunde Olaniran and one of his backup dancers, both bending backwards toward each other in an ecstatic dance movement. Or marvel at Coombe’s shot of a very, very young White Stripes playing the Metro Times Blowout at Paycheck’s Lounge in 1999. (Jack White is clad in a puka-shell necklace that the dapperly-dressed rocker likely wouldn’t be caught dead in these days.) Coombe’s posed shots are great as well. See his shot of Ann Arbor-bred party rocker Andrew W.K. playfully stepping out of the shower at his childhood home, or Ann Arbor soul singer Mayer Hawthorne standing almost bashfully in front of Hitsville, U.S.A., in his first promo photos (Hawthorne’s suits and haircuts have gotten notably better since then). Coombe has chronicled the scene like no other, and done it in gorgeous style.

Another standout photographer in the show is Lansing’s Jena McShane. McShane has an outstanding command of color and negative space, both of which are on particular display in her photos of the Michigan Pink Floyd tribute band Echoes of Pink Floyd. McShane shoots Echoes saxophonist Chad Bement as a relatively small figure at the bottom of one composition, with a triangle of white fog and spotlight setting him majestically apart from the surrounding blackness. Or see one of McShane’s multiple photos of Alice Cooper, with the singer set strikingly apart from blue-green light in an almost magenta jacket as he wails into a microphone at the right edge of the frame. McShane has an incredible eye for the dramatic and it’s hard to avoid gravitating towards her shots.

In addition to these fine photogs, many of GIG’s artists do their work primarily from behind a drawing table or computer screen. Chief among these is Ann Arbor artist Jeremy Wheeler, who blends ‘60s psychedelic aesthetics, an ‘80s B-movie obsession, and the dynamic style of classic comic books into an eye-popping style all his own. Check out Wheeler’s pen-and-ink illustration for a poster promoting “a celebration of life” following the death of Gary Grimshaw (a Detroit music poster legend in his own right). Text describing the lineup undulates in stately black-and-white waves below a rendering of Grimshaw’s likeness. Or see the original pen-and-ink drawings and digitally colored finals for Wheeler’s comic strip describing his experience at the Stooges’ 2011 show at the Michigan Theater honoring their late guitarist Ron Asheton. Wheeler’s story is humorous, touching and brimming with energy, a truly unique tribute to Asheton, the Stooges, and the local scene done purely for the love of the art. 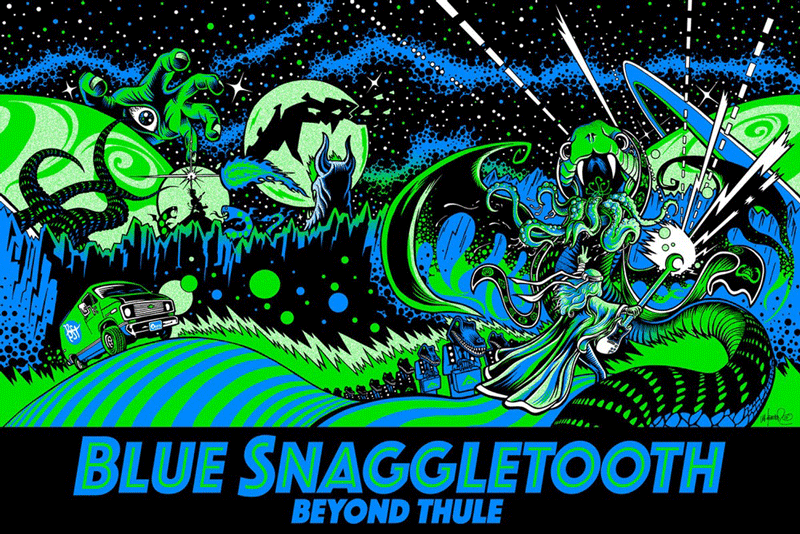 Coombe, McShane, and Wheeler are just three highlights out of an exhibition packed with talent. Tony Fero and Robert “Nix” Nixon both provide some truly striking posters and album art, with B-movie and comic-book influences that echo Wheeler’s. Show curator Chuck Marshall presents several dynamic photos printed on canvas (make sure you seek out the show’s Easter egg: two boards full of Marshall’s lovely snapshots of a variety of local acts, tucked right around the corner from the main wall that introduces the show). Marshall noted that GIG is “just scratching the surface” as far as representing Michigan music-related visual art. And that’s the incredible thing about the rich variety of works in GIG: they comprise only a tiny sliver of a wild artistic world. It’s well worth taking a look at GIG in the setting of the Art Center, but the show is also likely to open attendees’ eyes a little more to the riotous never-ending art show taking place on telephone poles, venue walls, merch tables, and record store counters all over metro Detroit.