Preview: Tanya Tagaq in Concert with Nanook of the North 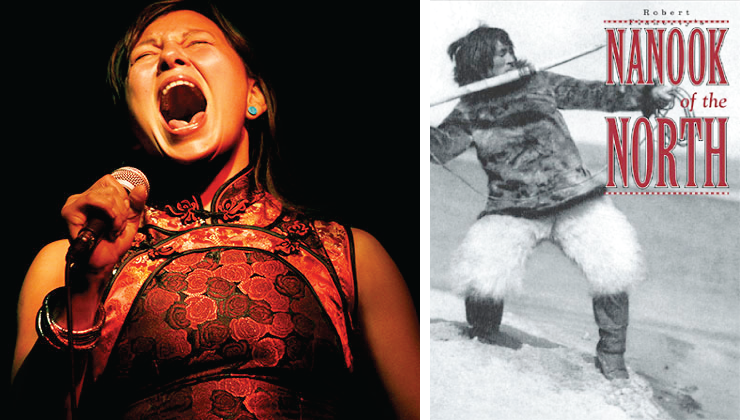 Tanya Tagaq in Concert with Nanook of the North.

My guess is Inuk throat singer Tanya Tagaq’s unnerving, primal singing style isn’t exactly what filmmaker Robert Flaherty had in mind to accompany his silent masterpiece, Nanook of the North (1922). But when she was commissioned in 2012 to provide a soundscape to Flaherty’s legendary cinematic landscape, Tagaq, an outspoken advocate of aboriginal rights, was put off by the film’s racial stereotypes and so conceived a soundtrack meant to reclaim the film with a 21st-century filter.

Flaherty’s documentary methods, including some staged sequences, have come under criticism over the decades. But the landmark film, still stunning nearly 100 years on, has an authenticity that overrides these complaints. (And to be fair, there was no documentary or ethnographic film-making to speak of before Flaherty; he can arguably be said to have invented the genres. And as such, there was certainly nothing remotely resembling later-day Cinéma vérité.)

Above all, the miracle of Flaherty's achievement in Nanook of the North - aside from the fact that he pulled it off with one camera and no lights in the freezing cold - is in documenting a remote way of life never seen before during a decade of the 20th century noted for ratcheting up nationalistic fervor and suspicion of outsiders across the globe. In her upcoming performance, Tanya Tagaq’s evocative style, full of throaty breathing and influenced by electronica, industrial, and metal, should lend as much to the stunning beauty of Nanook’s arctic landscape as it does in calling out the film’s racially charged clichés.


"Tanya Tagaq in Concert with Nanook of the North" takes place on February 2, 2016 at 7:30 pm at the Lydia Mendelssohn Theatre, 911 N. University, Ann Arbor.
Sign in to comment