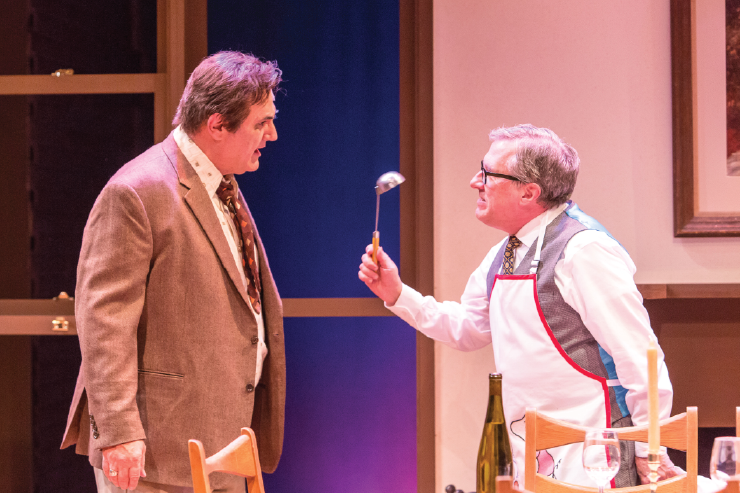 Guy Sanville's Oscar figures out that FU is David Montee's Felix Unger in the Purple Rose's production of The Odd Couple. / Photo by Sean Carter Photography

Oscar and Felix are back.

The most famous stage bromance, The Odd Couple, is as hilarious as ever at Chelsea's Purple Rose Theatre, where the jokes just keep coming but the play's underlying humanity rises to the top.

Neil Simon had a long, prolific and successful career, but The Odd Couple is probably his most enduring and most produced work. Following its box office success on Broadway and as a hit movie, it is produced regularly across the country and has even inspired a female version.

The Purple Rose makes their production special with an excellent cast in top form, hitting each zinger with perfect timing, while finding the play's heartfelt take on what it's like to be lonely in a big city.

The neat-freak, fuss budget Felix Ungar has been given the boot by his wife and his poker-playing buddy Oscar Madison, an uber masculine slob, reluctantly offers him temporary residence in his Manhattan apartment. The apartment has been too big and too empty since Oscar's divorce.

At the heart of this story are two men of opposite personalities who find a way to complement each other. Guy Sanville is the gruff, slovenly Oscar but with a look in his eyes that suggests a sensitivity befitting one of New York's top sports writers. He's funny in a sly, deadpan way. David Montee is a sweet-natured Felix, the slightly prissy man who enjoys cooking and can't stand a mess. Montee doesn't overdo the effeminate qualities as some actors would and instead emphasizes Felix's gentleness along with his irritating, but funny, perfectionism.

Lauren Mounsey makes her professional directing debut and does a fine job of keeping the mood droll and funny but also low key. The jokes are there and the audience laughs but they come out of real conversations. All of her actors are in sync which keeps things moving along hilariously.

The poker gang played by David Bendena, Jim Porterfield, Chris Lutkin and Tom Whalen kibbutz and razz each other with easy rapport. Porterfield is especially funny as the excitable cop Murray, whose agitation rises to a boil of nervous energy.

Oscar and Felix, of course, find female companionship in the form of the ever lovable Pigeon sisters, Gwendolyn (Michelle Mountain) and Cecily (Rhiannon Ragland). They twitter and fidget about as their surname suggests and all in sparklingly twitty English accents. Their scene with Felix is both funny and endearing.

The intimate Purple Rose setting is perfect for The Odd Couple, drawing the audience into Oscar's Manhattan apartment. Set designer Bartley H. Bauer does a good job of presenting a well-appointed apartment that has somewhat gone to seed under Oscar's disregard.

These are characters we all know so well from stage, movie and a hit TV series, but the Purple Rose gives them bright new life.

The Odd Couple continues through March 26 at the theater, 137 Park Street in Chelsea. Tickets range in price from $19 to $43 with discounts for students, seniors and groups. For more information or to make reservations, call the theater box office at (734) 433-7673 or go online to http://www.purplerosetheatre.org.