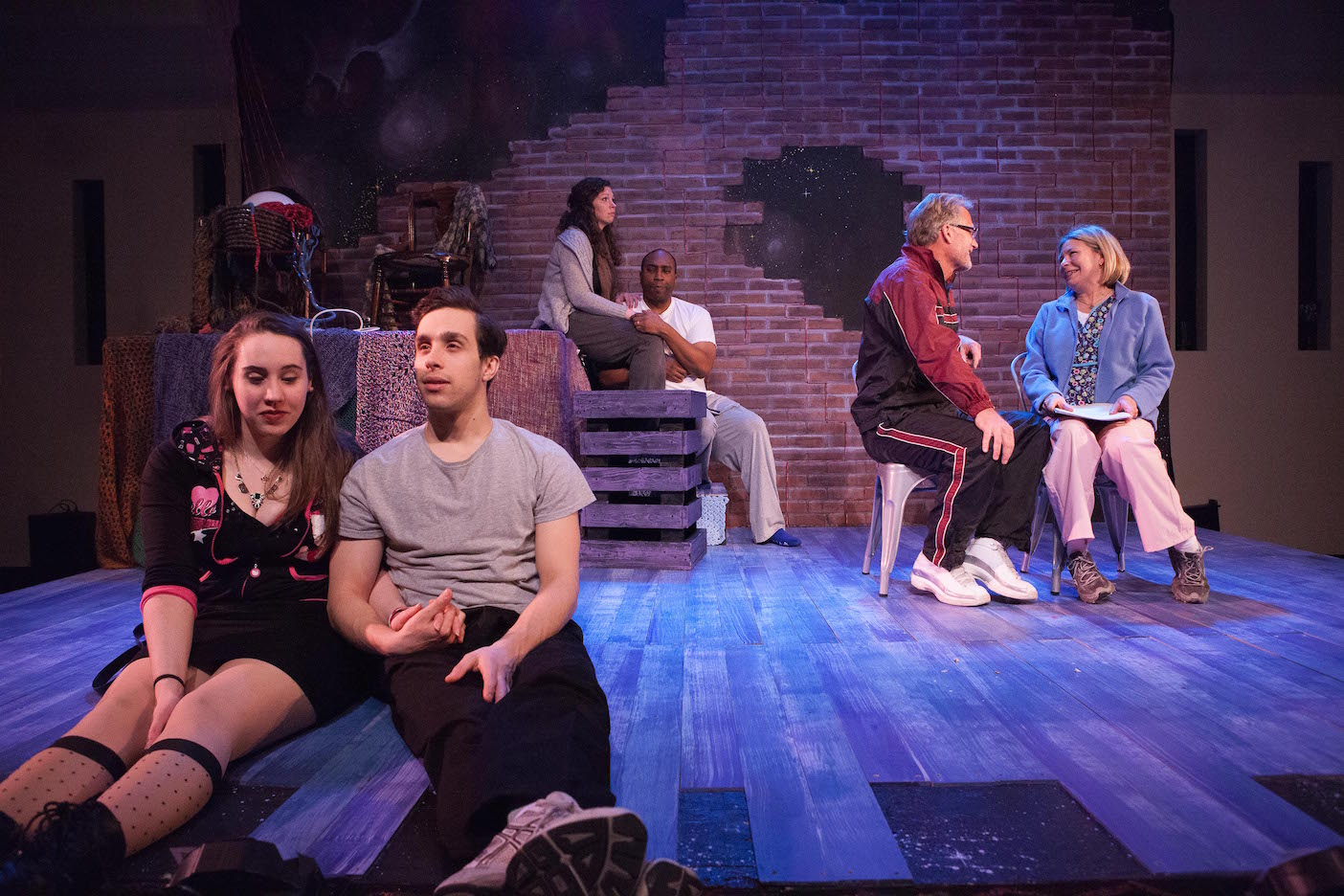 The cast of Electric Baby. / Photo by Sean Carter Photography

The new Kickshaw Theatre is kicking off with a bold promise that it will be presenting theater with a bite by staging Stefanie Zadravec's The Electric Baby as its first production.

The Electric Baby is a play with drama, humor and a social conscience. But it is also burdened by its shifting styles, its dips into magic realism and its central symbolic image, a baby that "glows like the moon."

In choosing to take on this particular play, director Lynn Lammers dares to challenge her audience to give in to the playwright's excesses to mine for the moments of gold. She has the benefit of directing an outstanding and dedicated cast that shares her sensitivity and seriousness to material that often seems too fragile.

An immigrant mother in a rundown apartment is our guide. The Romanian immigrant, Natalia, talks directly to the audience, suggesting helpful folk remedies or telling fanciful folk tales, all while rocking her baby. The baby is hope in an unusual form.

The action begins with a middle-aged couple engaged in a fierce argument while waiting for a valet to bring their car after visiting the husband of their deceased daughter. The woman becomes enraged and hurries into the night.

Nearby, an immigrant African cabdriver picks up a young man and woman who have just dramatically stormed out of their low-paying restaurant jobs but become embroiled in their own argument about the woman's side job as an "escort."

The taxi and the running woman collide, setting off a series of encounters. In the process Zadravec explores a myriad of social issues from the impact of loss on a longstanding marriage, the problems of aging in an economic downturn, the problems of the young forced into dead-end jobs, the problems of immigrants trying to make it in a less than friendly America. To do this, she moves back and forth from realism to folk tale and mysticism. But the Kickshaw cast makes it work.

Vanessa Sawson's Natalia is earthy, confiding, at times romantic. The accent sounds very credible. She is especially effective at drawing the audience in as she cajoles them with her old country remedies. She is also good at portraying the bitter struggle in her once hopeful life in America.

William Bryson as the cabdriver, Ambimbola, also has a credible accent that booms with authority. He also has a sardonic chuckle and a face that animates a hundred different emotions. This character is a beacon of hope that depends on Bryson's charm to work.

The married couple groping to repair a badly damaged marriage are played sharply by Julie Glander and Peter Carey. Glander at first is a bundled of nerves as Helen, grieving and blaming for too long. Gradually she learns how to channel her grief and Glander handles the transition beautifully. Carey's Reed is a difficult character hiding a secret and holding down his own grief until it boils over. Carey's rich voice gives special weight to Reed's attempts to evade and then accept his responsibilities.

Mary Dilworth plays the foul mouthed young prostitute, Rozie, with a perfect combination of childlike vulnerability and defiant brass. Dilworth snaps off a torrent of vulgarity while retaining that hint of the young girl she once was.

Michael Lopetrone rounds out the cast as Dan, Don and David. He makes each a little different. His stuttering Dan is never played for laughs or sympathy.

This is a strong beginning for a new company that might have played it safe the first time out. It will be interesting to see where they go from here.