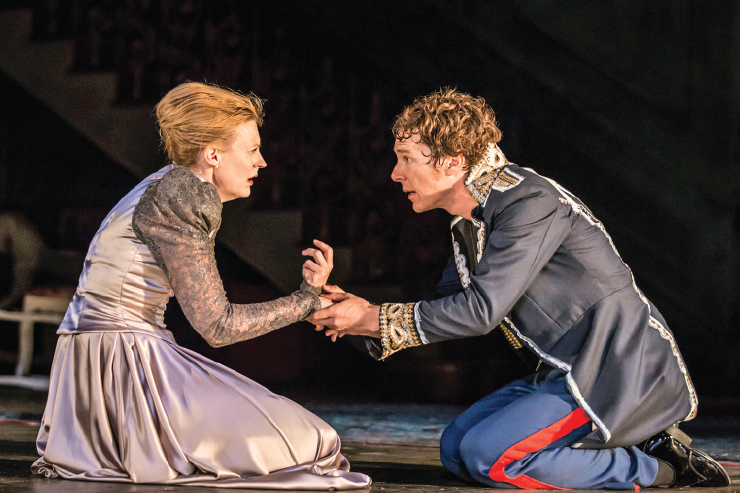 On Sunday, January 17th, the Michigan Theater showed an encore screening of the National Theatre Live’s production of Hamlet to a sold-out theater. Starring Benedict Cumberbatch, this production entirely reimagines the classic play and brings it into focus with a captivating clarity. It’s evident from the moment Hamlet enters the wedding celebration between his mother and his uncle that this is a dark play. The set is characterized by indigo hues and shadows, so that Elsinore, the Danish royal castle, appears both splendid and on the verge of decay.

Cumberbatch gives an excellent performance, delivering his lines with a convincing ease. This production presented Hamlet as more than a vengeful, petty step-son. Cumberbatch infuses Hamlet with purpose and emotional depth. His performance is anchored in the grief Hamlet feels over the death of his father, making Hamlet’s erratic behavior throughout the play more understandable.

War is constantly on the edges of the action; several scenes take place in a command room, antique swords and military paintings decorate the castle, and the second act includes scenes on a battlefield. Yet that constant threat is entirely overshadowed by domestic drama. Polonius and Claudius are only too willing to meddle in the lives of their children, taking time off from political matters to contrive meetings between Hamlet and Ophelia which are then watched from behind closed doors. In a way, it seems like the entire royal family is consumed, one way or another, by madness.

There are so many elements of this production that deserve praise. An inspired set design, created by Es Devlin, resulted in a broadcast that was almost like watching a typical movie. The only difference was that occasionally people would run onstage to shuffle things around in anticipation of upcoming scenes. The enclosed nature of the set, which was built at an angle to the front of the stage, almost seemed like it was designed with the camera in mind. Because the camera never captured any offstage action, it was easy to forget that you were watching a play. The downside of this cinematic quality is that the main room of Elsinore became a little claustrophobic over time, but the feeling dovetailed nicely with the themes explored by the production.

The second half of the play was characterized by low lighting, with spotlights targeting specific areas of the stage. During the final acts of the play, the entirety of the set is covered in piles of black debris and broken furniture, adding an unsettling element of discord to the Elsinore scenes. It seems as though a darkness or illness has burst out of the characters and been projected onto the rooms through which they move. The whole stage never seems to be visible, and that darkness overshadows the actions of the final scenes. We’ve reached the end of the play, and the end of almost every character onstage as the play culminates in a destructive whirlwind of a finale.

While I suspect that Cumberbatch’s popularity attracted many people to this broadcast, I got the impression that many of the people who saw the play with me enjoyed their overall experience. I know that I appreciated the chance to see a first-rate production at an affordable price. The filmed version of the play probably wasn’t quite as good as being there—I think you lose a bit of the interplay in energy between the audience and the actors—but I’d say this definitely satisfies as the next best thing. I would definitely recommend future versions of the live broadcasts for those of us who can’t jet off to London in time for the next big production.

Audrey Huggett is a Public Library Associate at the Ann Arbor District Library and knows a hawk from a handsaw.