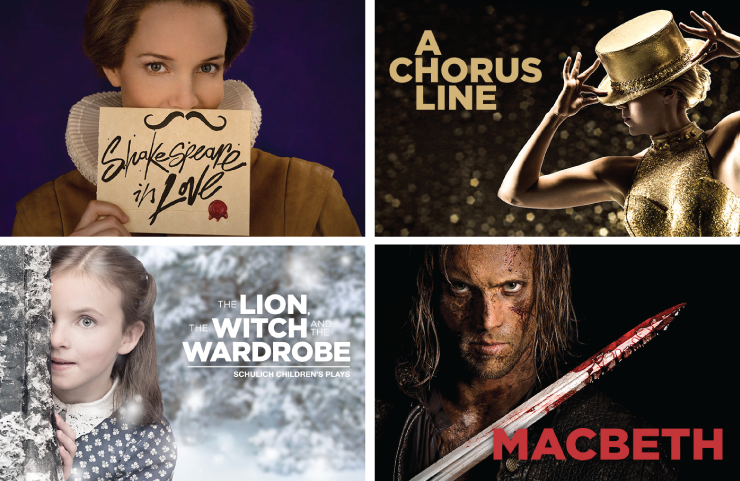 A small sampling of the many plays that will be performed at this year's Stratford Festival.

The Stratford Festival, an annual, Canadian theatre festival, is set to begin in April and this year's lineup is typically wide ranging, with 13 plays at four venues.

As always, Shakespeare is the heart of the festival. This year, the Bard is represented with productions of Macbeth, As You Like It and a reworking of Richard II, Henry IV, Part 1 and 2, and Henry V into two plays under the title Breath of Kings. The presentation was conceived and adapted by Stratford veteran Graham Abbey.

Shakespeare, himself, is the lead character in a new stage version of the Oscar-winning film Shakespeare in Love. The comedy sets the young playwright in an Elizabethan setting that is not too different from our own.

The two musicals both have theatrical themes. A Chorus Line is a tribute to modern troupers and Stephen Sondheim's A Little Night Music, an adaptation of Ingmar Bergman's Smiles of a Summer Night, with the hit song "Send in the Clowns."

Every year, Stratford presents a production geared for families. This year it's a stage adaptation of C.S. Lewis's popular fantasy The Lion, the Witch, and the Wardrobe.

Arthur Miller's All My Sons is a modern Shakespearean tragedy of blind betrayal in the story of an airplane manufacturer who cuts corners to save money during World War II.

Other works are Moliere's comedy The Hypochondriac, Henrik Ibsen's John Gabriel Borkman, and the world premiere of two contemporary plays, Aeneid, a modern take on Virgil's epic poem, and a comedy, Bunny.

This is a good year to check out the festival at bargain prices. The value of the Canadian dollar has been falling. Recently the U.S. dollar was worth $1.40 Canadian. That's good news for thrifty theatergoers for tickets, hotel rooms, and restaurants.

The season begins in April and runs through the end of October.