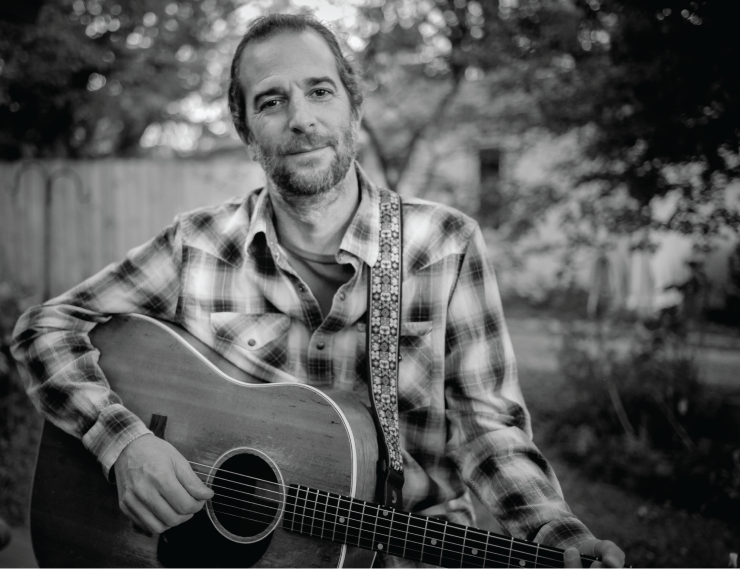 Buhalis's music has taken him all over the country, but he’s always returned home to Michigan.

Local folk musician Chris Buhalis says that his newest album Big Car Town, coming out March 11, is very Detroit-focused. “You’re never sure how well that’s going to go over in some places,” he joked to attendees at a small concert in an Ypsilanti home last month. Buhalis was born on the east side of Detroit in 1969 and, though his music has taken him all over the country, he’s always returned home to Michigan.

Buhalis is a master of evoking the feel of a place in his songs, and those familiar with Michigan will connect deeply with many of the tracks on his new record. The title track talks of Buhalis’s experiences growing up in Detroit. I loved the line in the chorus “Jesus saves, and Gordie Howe gets the rebound,” which Buhalis remembers seeing spray painted in giant letters on the backside of Olympia Stadium before it was demolished.

Buhalis doesn’t just sing about Michigan, though. One of the privileges of seeing him in such a small and casual venue was that he was able to talk intimately and at length with the audience. He talked after every song, sharing stories about his life now and about experiences he had in the past, tying it all back in eventually to the next song that he was going to play. For example, when he was driving to the Boundary Waters between Minnesota and Canada years ago, Buhalis said that he saw the same truck pass him three times on a long stretch of lonely road. That truck driver was the inspiration for one of the songs. Buhalis also told us the story behind the song “Whiskey Six,” which he performed as well. He read about the men who, during the Prohibition Era, would drive their Model Ts back and forth across the frozen Detroit River, transporting alcohol from Canada to the United States. These cars were known as “whiskey sixes,” and Buhalis was so fascinated by the concept that he had to write a song about it.

Buhalis also covered three Woody Guthrie songs, the last one—“This Land is Your Land”—by request from the audience. I was thrilled to hear him cover Bruce Springsteen, too; he played “Two Hearts” and told us that he couldn’t wait to see Bruce on his upcoming The River tour -Buhalis has already seen him multiple times, and said he wouldn’t miss it.

The Big Car Town release will be accompanied by a show at The Ark on March 11. Buhalis will be joined at the show by Jeff Plankenhorm, Dominic John Davis, and Michael Shimmin, all of whom played on the record.

Elizabeth Pearce is a Library Technician at AADL and shares Buhalis' love of The Boss.