Review: Momentum - Great Modern Dance with all the Weirdness You Might Expect 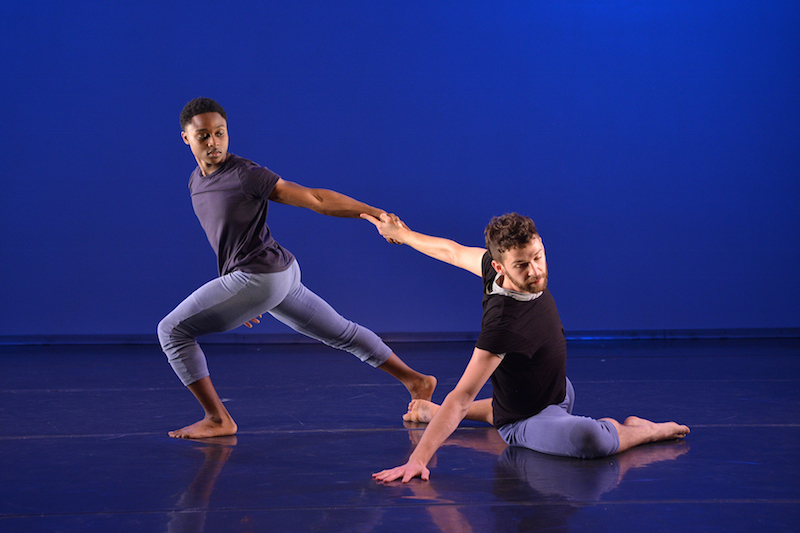 Dancers in a piece by Camille A. Brown.

The University of Michigan Department of Dance trains young people to be excellent modern dancers and then frequently asks them to perform bafflingly academic pieces. Their most recent performance, Momentum, running at the Power Center from now until February 7th, showcased this duality. The first three pieces were all choreographed by Department of Dance faculty, and the finale by guest choreographer Camille A. Brown.

Momentum opened with a piece by local dance legend Peter Sparling. I generally like Sparling’s work, but recently he has become enamored of video projections which tend to overwhelm his choreography. His work for Momentum, “Big Weather,” featured not one but two video screens between which the dancers moved. The videos contained a strange mix of images, including stars, corpses, sandbags, and at one point, a stuffed elephant falling slowly from a table. The dancers wore heavy rubber boots that they took off and on throughout the piece, which was set to pounding and not particularly rhythmic percussion music. If I’m not describing much of the dancing, it’s because I was too distracted by the trappings of the piece to focus on the actual movement. At his best, Sparling, a former principal dancer with the Martha Graham Dance Company, can choreograph wonderfully thoughtful modern dance pieces. However, “Big Weather” seemed more the work of an artist who has been insulated within academia for a little too long.

I was worried about the issues that would plague the second piece, “Cheating, Lying, Stealing,” choreographed by Bill DeYoung, because the program notes described it as about “the relentless dog-eat-dog momentum of office dynamics.” But after a strange start featuring a fake tennis match (which I quickly forgot), “Cheating, Lying, Stealing” became a fun and fast piece that worked beautifully with the music choice. The lead dancer, dressed in silver lamé, danced with such a stunning and precise ferocity that I could easily understand why all of the others dancers were following her lead by the end.

Amy Chavasse’s piece “Goodbye to Wayward Flesh” showcased some of the younger and less experienced dancers and brought a great sense of play to Momentum. I had a hard time focusing on the beginning because I was preoccupied by a dummy that was covered in duct tape and tied up to a movable piece of shattered plexiglass at the back of the stage. I half-expected the dummy to turn out to be a real dancer who might pop out at any moment, so I braced myself for the surprise. I did not have this same fear with the life-size stuffed alpaca watching static on TV in the front of the stage, although I found it equally confusing. “Goodbye to Wayward Flesh” featured some nice partnering and the dancers, dressed as what I can only describe as futuristic merpeople, seemed to be truly enjoying themselves.

The last piece of the night was choreographed by Camille A. Brown, who will be bringing her new work Black Girl–Linguistic Play to the Power Center on February 13th. Brown’s piece, “City of Rain,” was far and away the best of the night. It would be worth going to see Momentum for this work alone, which allowed the Department of Dance to show off their most amazing dancers. Of particular note is Beynji Marsh, a junior from Chicago who could easily be mistaken for a professional dancer. Marsh’s precise control over his body is matched by the emotion and nuance he brought to the choreography. He is a true and notable talent and I look forward to seeing his dance career flourish. All of the dancers in “City of Rain” were excellent, and it was a moving and lovely end to the evening.

Stuffed alpacas and rubber boots aside, Momentum is worth your time. The dancers are talented, though their abilities were sometimes lost amid the choices of some of the more academic choreographers. Notably missing from Momentum was a piece from faculty member Robin Wilson, who is one of the most accessible and excellent choreographers in the Department of Dance. Wilson acted as Rehearsal Director for “City of Rain,” but it would have been great to have gotten an original work from her as well. I could have done with fewer video screens and unused but overbearing set pieces. My date for the evening, my father, suggested that the faculty be required to choreograph to only Katy Perry music for a year, just for the challenge. Although I’m more of a Taylor Swift fan myself, I can’t help but agree with the sentiment. In the meantime, get a ticket to Momentum and enjoy it for–and despite–all its weirdness.

Evelyn Hollenshead is a Youth Librarian at AADL and former dancer.

Momentum continues its run at the Power Center through this weekend, with performances Friday and Saturday, February 5 and 6 at 8 pm, and Sunday, February 7 at 2 pm. Tickets range from $22-$28, and students with ID can attend for $12.