Review: Direct from Sundance - The Lobster 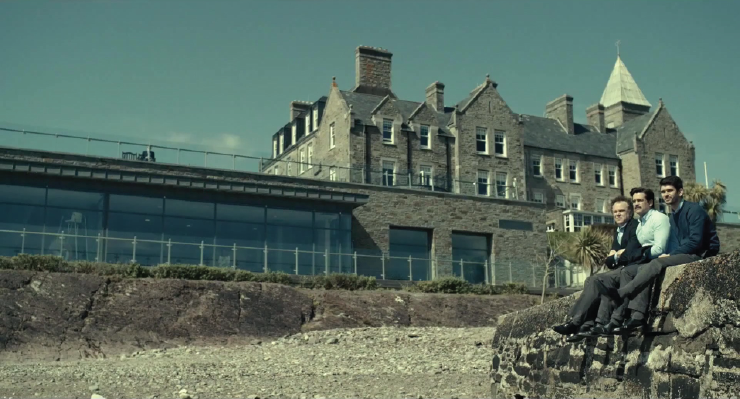 Before a special, packed, “Direct from Sundance” screening of The Lobster got underway on Thursday, February 3, at the Michigan Theater, Executive Director/CEO Russ Collins appeared on stage with Sundance Film Festival programmer Hussain Currimbhoy.

By way of introducing The Lobster, which won the Grand Jury Prize at last year’s Cannes Film Festival, Currimbhoy said, “This one has a certain sense of humor and sense of irony, and it addresses structures that control us and stop us from being ourselves. … (The film’s) absurd, but we figured this was the town that brought us Madonna and Iggy Pop, so you can handle absurd, right?”

Filmed in Ireland, and directed by Greek filmmaker Yorgos Lanthimos, The Lobster tells the story of a newly dumped husband (Colin Farrell, sporting glasses, a moustache, and extra weight) who must now go to a hotel to try and find another partner. He has 45 days to do so, or he will be turned into an animal of his choosing. (His brother, now a dog, accompanies him.) At this hotel, masturbation is forbidden; hotel staffers, as part of their duties, bring guests to arousal without orgasm; and potential partners must share a trait. Consequently, one widower hotel guest with a limp (Ben Whishaw) regularly bangs his face against things to make his nose bleed, in order to match with a nosebleed-prone woman; and Farrell’s character pretends to be callous to match with the hotel’s longest-surviving guest, who has earned her extended stay by successfully shooting down the escaped, off-the-grid “Loners” that live as a tribe in the wilderness.

In addition to Farrell and Weisz, John C. Reilly plays a hotel guest who’s struggling mightily with the system’s strictures; but he, like everyone else in this black comedy, is stoic above all else, moving grimly, with resignation, through each day. Plus, as Currimbhoy noted after the film, Lanthimos was drawn to shoot the film in Ireland not only because of the country’s aggressive film incentives, but also because of the natural landscape’s “gray light” quality, which gives the exterior shots in The Lobster a washed-out look.

“He needed a certain kind of setting or atmosphere that only Ireland has,” said Currimbhoy.

The film’s first half, set at the hotel, achieves fresh, affecting balance between horror and humor – to name one example, after couples form, if they fight often, they’re assigned a child to parent (which I found hysterical) – and makes you question the deep-seated, constant social pressures upon us to pair off, as well as the myriad ways society tends to condescend to those who live outside that model.

And while Farrell’s character’s defection to the Loners provides a kind of satisfying symmetry – the opposite model has significant flaws, too, and of course he finds love not in the place that’s rigidly designed for it, but in the space where it’s forbidden – the latter part of the film drags and lacks the weird spark present in the hotel scenes. The ambiguous final scene, though, is likely to spur heated discussions, as well as some frustrated anger.

The Lobster was part of the Sundance Film Festival’s Spotlight Series, which consists of “films from other festivals that the programmers love,” said Currimbhoy. “Movies that won’t get picked up for distribution, probably, but that have a certain quality, something fresh.”

Some of the biggest news coming out of this year’s Sundance Film Festival, of course, involved the controversial drama, Birth of a Nation, which focuses on African American preacher Nat Turner’s 1831 rebellion aimed at freeing slaves in Virginia, and the violent retaliation by whites that followed.

During The Lobster’s post-screening discussion, Collins confirmed that Cinetopia – the annual international southeast Michigan film festival that was born at the Michigan Theater – was in talks to bring Birth of a Nation to the Mitten State (hopefully) when the festival happens June 3-12, 2016.

The Michigan Theater’s relationship with Sundance began in 2010, when Sundance rolled out a program wherein 8 films that had just had their world premieres at Sundance in Park City, Utah, were shipped out to a handful of art house theaters across the country for a one-night screening, and one or two people involved with the film – a director, a star, a producer – would be on-hand to answer questions. (The first Sundance movie shown at Ann Arbor’s Michigan Theater through this program was the comedy Cyrus, and one of the stars, Jonah Hill, plus filmmaker brothers Mark and Jay Duplass, appeared.)

More recently, Sundance’s close ties to the Michigan Theater (and Collins, who helms the annual, Sundance-affiliated Art House Convergence conference in Park City) have resulted in Ann Arbor becoming the sole site for this kind of special screening.

And Currimbhoy’s inaugural visit seems only to have cemented the good relations between Ann Arbor and Park City.

“I am loving this place, by the way,” Currimbhoy said. “It has really surprised me. … You are lucky to live in a place with a theater like this.”

Jenn McKee is a former staff arts reporter for The Ann Arbor News, where she primarily covered theater and film events, but also wrote general features and occasional articles on books and music.