Review: Ruta Sepetys on Salt to the Sea 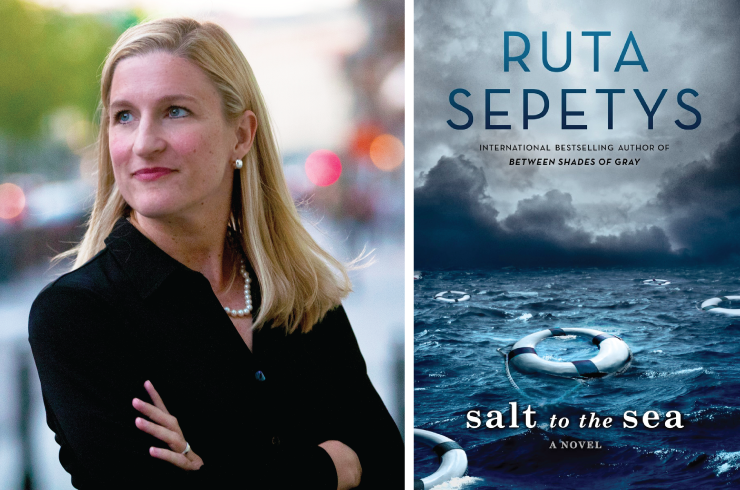 Local young adult author and history fanatic Ruta Sepetys came to Literati on February 10th to discuss her newest work of YA historical fiction, Salt to the Sea.

The book tells the tragic story of teens Joana, Emilia, and Florian, refugees fleeing from Poland and the advance of the Red Army at the end of World War II. Each from a different background and a different country, their paths cross aboard the Wilhelm Gustloff, a real, historic ship that almost no one, including myself, seems to have heard of—despite it being the scene of the worst maritime disaster in world history.

Literati staff opened the evening with a quick introduction of the local author, making sure to mention that her novel Between Shades of Gray was the Ann Arbor/Ypsilanti reads book of 2014. Then Sepetys stepped over to the microphone to introduce herself, her background, and her newest story. Her enthusiasm for writing and storytelling was obvious, but it was clear by the way she lit up as she launched into the Wilhelm Gustloff's tragic tale that she was really in it for the history.

According to her avid research, the Wilhelm Gustloff was a German cruise ship that set sail into the Baltic Sea at the end of World War II packed with thousands of refugees searching for safety. The ship, designed to carry a maximum of 1,400 passengers, was filled with so many fleeing survivors that when it finally set sail, it carried 10,000 passengers, pressed into dining rooms, dance halls, and even the emptied swimming pool. Rooms meant to fit two contained 15 or 20 people. The ship was so heavy, it was forced to sail in deep water—and that's where a Soviet submarine found it and where three well-aimed missiles led to the world’s most fatal maritime tragedy, sinking the ship and sending 9,400 people to the bottom of the Baltic Sea.

Using only a handful of black and white photographs and her undeniable enthusiasm, Sepetys managed to paint a vivid picture of the tragedy and of her research process and keep the crowd completely rapt. With the flair of a master storyteller she managed to pull the audience into the story, hold us in suspense, impress on us the horror of the Gustloff's sinking—and then lighten the heavy atmosphere with a few anecdotes about her search for facts on the ship and its history.

Salt to the Sea was a mammoth effort in research for Sepetys, as she traveled to Poland and several neighboring countries to meet survivors of the disaster, hear stories from men who had dived the wreckage of the Gustloff, and wade through mountains of artifacts and heirlooms from those who lived the tragedy.

Sepetys explained that she chose to tell the story through characters from several different nationalities—Polish, Estonian, Lithuanian, and others—because she had found that the narrative of history could drastically change based on whose cultural experience was being told. You might write a book and think you know what it’s about, she said, but the story is really decided by the reader—and different countries can take one story in some vastly different directions.

She offered up her 2013 novel, Out of the Easy, as an example. Translated into dozens of languages, no two countries seemed to agree on what the book was about. Sepetys, when she wrote it, meant it to be about a girl living amongst the bordellos and brothels of 1950s New Orleans and struggling to shape her own destiny and make a life for herself outside of “The Big Easy.” But in France it’s marketed as a story of feminism in historical context. In Germany it’s a noir thriller. In Poland it’s about decisions and the dynamics that affect choice. And in Thailand, I kid you not, it is called The Hooker Book.

This diversity of interpretations fascinated Sepetys, and gave her a goal for this newest book: to show how the significance of a story could change from person to person, country to country. The author's genuine excitement was infectious and even the Q & A portion of the evening was entertaining as Sepetys enthusiastically answered questions from the audience and listened intently when audience members told their own family refugee stories. It was evident that the stories left the greatest impression on her and she made it clear that telling those stories was Salt to the Sea's main purpose. What exactly affects how history is shaped? Who decides how the stories get told and which stories get told?

Salt to the Sea was released on February 2nd.

Nicole Williams is a Production Librarian at the Ann Arbor District Library and if she ever writes a book she is totally calling it The Hooker Book.