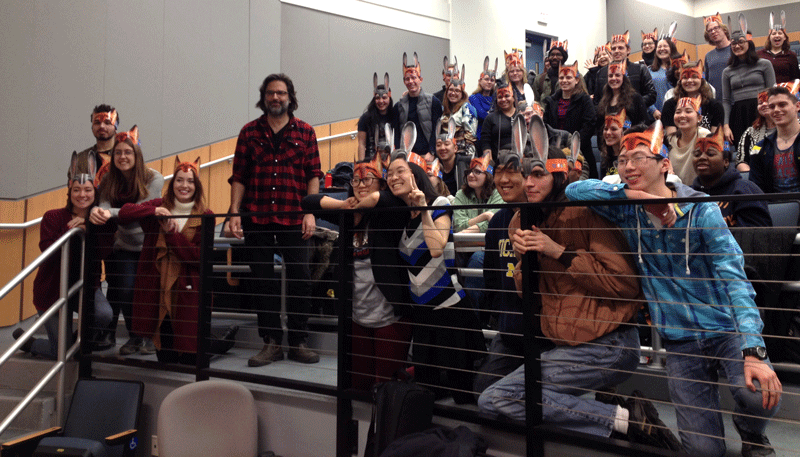 Matthias Lechner meets a large group of mammals at the University of Michigan. Photo by Patrick Dunn.

Budding animation enthusiasts at the University of Michigan and Eastern Michigan University had the opportunity to learn from one of the best in their field this Thursday and Friday, as Disney animator Matthias Lechner gave free presentations to students at both schools. As art director of environments on Disney’s upcoming March release Zootopia, the German-born Lechner oversaw a staff of about 100 through a four-year process that equates to set design on a non-animated movie.

Zootopia not only features the largest digital environment yet created for Disney; it doubles the size of the virtual world created for previous record holder Big Hero 6. Creating that world entails an insanely detailed process, as every set and every tiny object is meticulously researched, sketched, and then realized as a 3-D model. In a slide presentation, Lechner walked students through the process of developing Zootopia’s “world built by animals, for animals,” sharing research, early designs, and finished scenes from the film. He interacted warmly with the student audience, projecting enthusiasm for working on his first Disney movie after a lifelong love of the studio’s work.

After his presentation at U-M, Lechner chatted with me about the experience of working with Disney for the first time, the very realistic research that goes into creating a fantasy world, and the big Disney project he’s got lined up next.

Q: You said that seeing The Jungle Book at age 6 was what interested you in animation in the first place. How did you feel when you finally got your first job at Disney?
A: You’d think that I’d be really happy. But I have to say that the first half-year I was extremely stressed. It was like, “What do they want from me that they can’t do themselves?” I guess it was just my style that worked really well, and [Walt Disney Animation Studios chief creative officer] John Lasseter liked it, so they went with me. But everybody’s at the top of their game. I’m really used to working on movies that are middle-budget, so you try to make the best out of what you have. Suddenly you have all the time in the world, so you’ve got to come up with something that is worth all the time in the world.

Q: Disney’s such a big studio. How much do they try to impose a house style on what you’re doing?
A: That was surprising, that they don’t. I go in there and I was wondering, “What is it like? Is there a political agenda or anything like that?” But it’s not. The directors try to make it as good as we can, basically to please ourselves. If other people like it, that’s great. But nobody told me what to do or what not to do.

Q: What was John Lasseter like?
A: He’s a little bit of a celebrity at Disney because he’s the über-father, as we’d say in German. He’s a very emotional person, in a good way. He likes to hug. I was a little worried in the beginning because everybody really listens to what John wants, and that can be dangerous. But he wants the right things. Whenever he gave a note, it was the right note. So I don’t have a problem with that at all. That’s great. He’s been really good for Disney.

Q: In the animation that you enjoy, do you have a personal preference between cel animation and computer animation?
A: I used to. (Laughs) I come from cel animation, so for set design it had a lot of advantages. You would never have to wonder, “Can we afford this?” because everything’s just a drawing. You can draw whatever you want, and if it’s only for one scene it doesn’t matter. When you’re doing 3-D you have to plan: if we build a big set, can we use it in other scenes too? In the early days of 3-D there was a tendency of it not looking satisfying. Pixar did a very amazing job with their films, and yet they aged somewhat. I think now we’ve reached a point where Zootopia will not look old. It’ll just be a movie. In that respect, now I have a lot more possibilities, so I kind of like 3-D.

Q: It’s crazy looking back at Toy Story now, which looked so beautiful when it first came out, and seeing how much everything has changed since then.
A: Yeah. Toy Story is saved by the story, and that’s Pixar’s trick. If the story is entertaining then it doesn’t matter that much if it’s not perfect. In this movie we really went far out to fill it with detail and with love, basically to the top. We went as far as you can go right now.

Q: You mentioned bringing a NASA scientist in to consult about the “climate wall” [that separates Zootopia’s desert and tundra worlds, keeping the former hot and the latter cold]. Why put that level of scientific realism or scientific research into what is very much a fantasy creation?
A: Because they can. It’s one of John Lasseter’s little things, that he wants everything to be reasonable. Nothing is there just by coincidence. If you say, “This is the design I want,” you’d better find a good reason why you want this to be the design. Research is a big part of that. So if they offer to bring this guy in, of course we say, “Yeah. Let’s see if we can learn something from him.”

Q: You’ve mentioned how passionate you are about this movie. What do you like so much about it, besides the fact that you worked on it?
A: There’s that. And actually that doesn’t necessarily mean I like it, because I would see all the flaws. But I’m very happy with the sets. I’m happy with my part of the movie. Imagine that you think of something, or you dream something, and the best people in the world realize that for you. That’s an amazing experience. But what I really get a kick out of is the animation of the animals. We have dailies, and every day you see five or six scenes that come fresh from animation. It’s like Christmas for me. They’re so funny. There’s a scene where somebody crosses the road, which was not interesting in storyboard, and then the way they walk just makes it.

Q: How does it feel, after four years, to have this almost off your shoulders?
A: It is off my shoulders now. This [speaking engagement] is just reminiscing. It feels a little bit scary. I really got into it. I have to say, if it would have been only three and a half years, I would have said, “Ah, I can’t believe it’s over.” After four years I was like, “Okay. Done that.” It’s going to be hard for me to get as invested in the next project.

Q: Do you have your next project lined up?
A: Yes. Off the record–well, you can check if you can say it or not, but it’s Wreck-It Ralph 2.