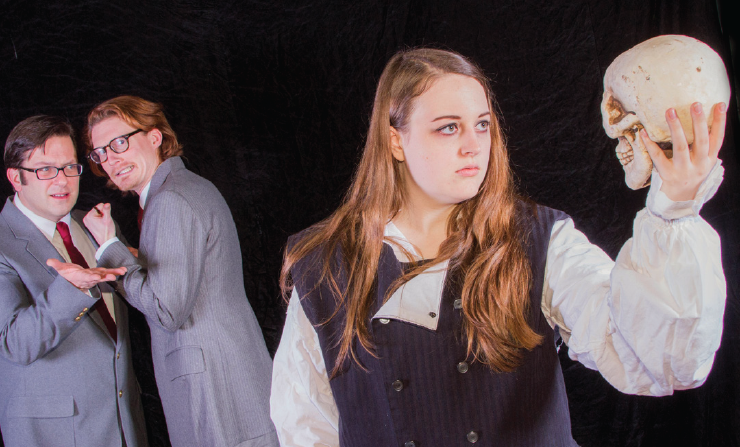 Rosencrantz and gentle Guildenstern watch Hamlet talking nonsense not to herself in A2CT's new production.

This year marks the 400th anniversary of the death of William Shakespeare.

Ann Arbor Civic Theatre, who began their season with an excellent staging of Julius Caesar, again salutes the famous playwright with a production of Tom Stoppard’s Rosencrantz and Guildenstern are Dead, the masterpiece of tragi-comic absurdity highlighting the misadventures of several characters from Shakespeare’s Hamlet.

Using two of the tragedy’s minor characters, the courtiers Rosencrantz and Guildenstern, as its centerpiece, the play premiered in London in 1967 before becoming a critical hit on Broadway, winning the Tony Award and Drama Critics Circle awards for Best Play. New York Times critic Clive Barnes wrote that the play was “very funny, very brilliant, very chilling” and stated that, “in one bound Mr. Stoppard is asking to be considered as among the finest English-speaking writers of our stage, for this is a work of fascinating distinction.”

Civic Theatre first tackled Rosencrantz and Guildenstern twenty years ago in its 1996-97 season. David Widmayer directs the current production, and, in addition to his fondness for the play and love of absurdist theater, is particularly excited about the original music created for the production and how it fits each character.

Performances of Rosencrantz and Guildenstern are Dead run Thursday – Sunday, March 10-13 at the University of Michigan’s Arthur Miller Theatre, 1226 Murfin Ave, 48109. Tickets are available online at www.a2ct.org, by calling the office at 734-971-2228, at the A2CT office at 322 W. Ann St., or at the door. Additional information is available by visiting www.a2ct.org.