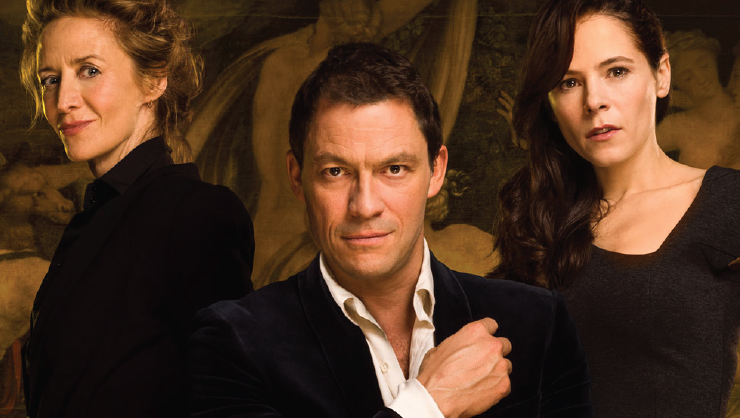 Set in pre-revolutionary France, Les Liaisons Dangereuses tells the story of the beautiful Marquise de Merteuil, played by Janet McTeer, and the dashing Vicomte de Valmont, played by Dominic West, former lovers who now amuse themselves in a friendly competition of seduction and manipulation. The two are having a grand old time toying with their peers when the Vicomte unexpectedly falls in love with his newest mark, the virtuous and beautiful Madame de Tourvel (Elaine Cassidy).

The Marquise was the real standout in this performance. We so rarely get to see female characters like her: intelligent and witty, but also deeply flawed, scarred by her fight for independence. The Marquise is a woman who ruins the lives of others for petty revenge or jealousy, but who also fights ferociously to secure and defend her own freedom. Her ability to carry out her schemes in a world where the cards are so deeply stacked against women is a testament to her more admirable qualities. McTeer’s performance as the Marquise was incredible, bringing true range of emotion to a character that could easily have been played as a pure villain. West and McTeer had a definite rapport that underlined an unspoken jealousy between the characters that motivates many of the actions later in the play, as the personal stakes for the pair are quietly pushed higher and higher.

The sumptuous costumes and candle-lit scenes created a feeling of unsustainable decadence completely taken for granted by the French nobility. Within this splendor, the manipulative games played by the Marquise and Vicomte can almost seem frivolous. Their machinations ultimately boil down to trivialities, except that the emotions and lives of those involved, including the supposed masterminds, are so deeply affected. This production did an excellent job of laying out the emotional field of the characters, ensuring that each betrayal and revelation was felt like a twist of the knife, drawing the audience into a world where reputation and appearances are everything.

I entered this viewing with zero background for Les Liaisons Dangereuses, but I now understand why the play has been so successful. The story is well balanced, the events spooling out in a way that keeps you entirely engaged with the action. I think the secret of Les Liaisons Dangereuses is the attraction of watching a scandal develop before you, with no threat to your own reputation, almost like a guilty pleasure. Part of the reason the play is so effective is that you want to see what happens next, and so the audience is in some ways implicated in the games of the Marquise and Vicomte.

Audrey Huggett is a Public Library Associate at AADL and agrees with Dominic West that people look much more attractive by candlelight.