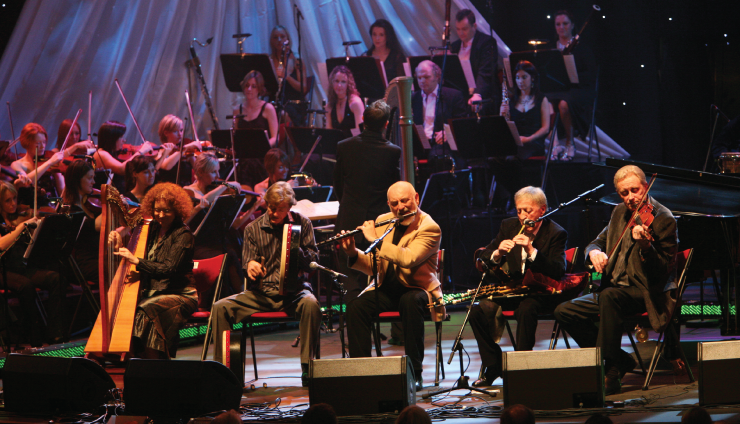 The Chieftains support local artists, even letting them join in the fun.

Just a wee bit in advance of St. Patrick’s Day, the University Musical Society brought the Chieftains to Ann Arbor’s Hill Auditorium on Saturday, March 5th. And if this charming, 90-minute show failed to get you in the mood for the holiday, nothing would.

The Chieftains – perhaps not surprisingly, given their longevity – have a pitch-perfect sense of balancing up-tempo, foot-stomping reels with more delicate numbers. Following a spirited fiddle solo (and dance) by Breen early in the show, Conneff sang “The Flower of Magherally,” largely without any musical accompaniment, letting us focus entirely on the melody and story. Then a quick take on “Cotton Eyed Joe” played out before McCormack appeared on stage to sing the moving ballad, “The Foggy Dew” (previously recorded by the Chieftains with Sinead O’Connor).

With such a vast catalog of music from which to choose, the Chieftains inevitably venture beyond the songs most familiar to fans. Among “new to me” offerings were: the Chinese tune “Full of Joy” (not my favorite, but a clear demonstration of the group’s commitment to sharing not just their own culture’s music); an inspired, gorgeous harp solo, masterfully delivered by Marshall; a song for Nelson Mandela titled, “The Troublemaker’s Jig”; and a musical reading of W. B. Yeats' poem, “Never Give All the Heart.”

This leads me to mention the electrifying role dance played in Saturday’s show. Though Breen was the first to put down her violin, various combinations of dancers performed throughout the show, and the consequence was consistently thrilling.

Most breathtaking of all were the Pilatzke brothers, whose percussive, perfectly synced, wildly complex dances conveyed a palpable sense of joy. I cheered every time they made their way back to the stage’s dance space. Something about their connection to each other amped the energy even higher, and in one instance, as they danced without music, they reminded us that, sometimes, the dance and the music are one and the same.

As the show neared its end, Moloney thanked the crowd and said, “This is one of our very favorite venues,” then played an encore and invited people from the crowd to join in a traveling dance line that moved through the aisles before heading back to the stage. Several fans rushed across their rows to take part, demonstrating the crowd’s unbridled enthusiasm for the show. With everyone’s hands joined, raising and lowering in time together, the moment seemed a wholly fitting conclusion to a night that felt so heartwarming and hopeful.