Review: Civic Theatre embraces the absurd in 'Rosencrantz and Guildenstern' 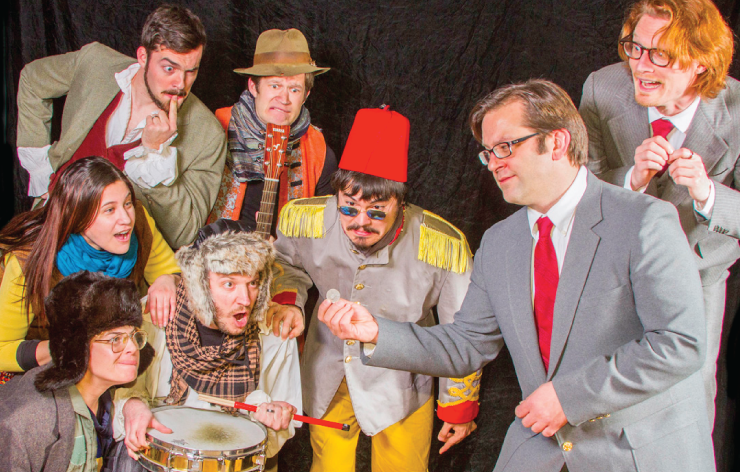 Rosencrantz and Guildenstern and their flipping coin.

Rosencrantz and Guildenstern are two minor characters in Shakespeare's Hamlet, friends from his youth who become minor pawns in Hamlet's battle with his Uncle Claudius. Stoppard imagines the agony of the bit player, waiting his moments on the stage and always a little clueless as to what his role is about or why it matters. The play borrows knowingly not only from Hamlet but also from Samuel Beckett's Waiting for Godot. The theme applies, of course, not just to actors but to all of us who imagine we are but bit players in someone else's story.

As the play begins, the two are endlessly flipping coins and discussing probability. Guildenstern is the verbose one. James Ingagiola saunters about the stage discussing all the important questions of journalists and philosophers: who, what, where, when, and why. Guildenstern is never sure about anything and always hesitates a bit too long. Ingagiola is a humorously pompous Hardy to Isaac Ellis' twittery Laurel as Rosencrantz.

Rosencrantz is a nervous but playful man, who enjoys a good game of coin flipping or anything else that is suggested. He's malleable and a bit slow on the uptake. Isaac's face is constantly mugging awe, fear, childish delight, or childish terror. His voice also rises higher as his confusion grows.

These two amiable clowns have a hard time remembering who they are, why they're in Elsinore, and exactly what they have to do with the actions around them. They are constantly reminding each other of how it all began and what it is that they are supposed to do.

As they wait, a whole gaggle of bit players arrive, the Tragedians, the players hired by Hamlet to expose his uncle's guilt in the murder of his father.

Joseph McDonald is boldly expressive as The Player, the group's leader with a taste for blood and vulgarity. He tries to explain how theater works to the bewildered Rosencrantz and Guildenstern. He does so by having his players display those elements of theater that the audience expects, like a good death well played. The players are a boisterous crew who give it their all.

The player who gets the most attention is the lovely Alfred, who plays the female roles. Daniel Bizer-Cox has fun sashaying about the stage in stockings and diaphanous clothes and, yet, he never over plays it.

Through this fog, the story of Hamlet runs on, off stage somewhere, until it's time for our two heroes to do their small part and then return to existential agony. In another gender switch, Hamlet is played handsomely by a woman, Suzy Culbertson.

David Widmayer makes his directorial debut at the Civic, and he's chosen a difficult play. Absurdist comedy is not for everyone. Tedium is one of Stoppard's themes and the play itself is sometimes tedious as Guildenstern goes on a bit with his musings. Still Widmayer clearly understands the core of this play and has three key actors who deliver on making their absurd characters come to comic life. Some of the Shakespearean scenes might have been played a little more formally and precisely to contrast more sharply with the protagonists' hazy world.

The play's title comes from a line near the end of Hamlet, when Hamlet's fury has left a stage full of dead bodies, worthy of the Player. A message arrives from London that in addition to all this mayhem, "Rosencrantz and Guildenstern are dead." But, of course, the point is that they live on, forever, in Shakespeare and in Stoppard.

Rosencrantz and Guildenstern Are Dead continues 8 pm Friday-Saturday, March 11-12, and 2 pm Sunday at the Arthur Miller Theatre on the North Campus of the University of Michigan, 1226 Murfin Ave, 48109. Tickets are available online at www.a2ct.org, by calling the office at 734-971-2228, at the A2CT office at 322 W. Ann St., or at the door. Additional information is available by visiting www.a2ct.org.