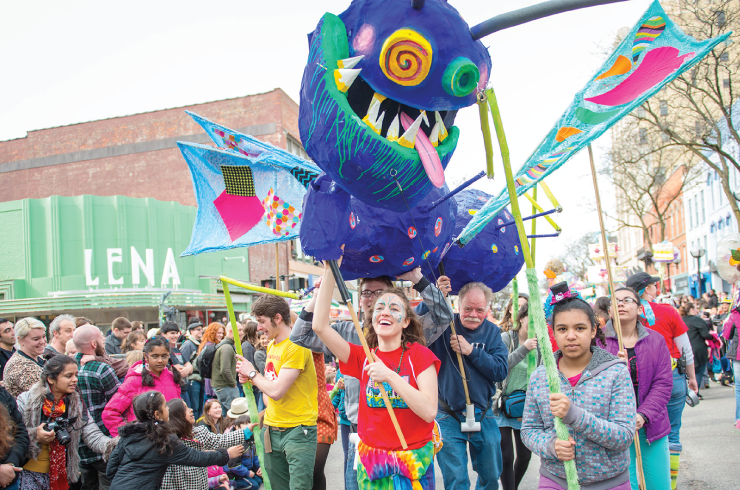 Festifools is sure to be a wonderfool time again this year.

Every spring in Ann Arbor, there are telltale signs that things are going to change, bloom, and get warmer: dirty piles of snow & leftover grit, giant potholes, crocuses poking from the soil, Hash Bash attendees filling the Diag with plumes of smoke, and a weekend of April Fools fun! Mark your calendars for Friday, April 1 and Sunday, April 3 for two of the most anticipated, dynamic, and artful events in town: FoolMoon and Festifools!

Friday’s FoolMoon is the newer of the two events with a slightly edgier feel, if only because it happens at night and beer can be consumed. The fun starts at three gathering places (Kerrytown Farmers Market, University of Michigan Art Museum, and Slauson Middle School) where revelers can assemble with their carefully crafted illuminated sculptures. The crowds at each stop march through town, proudly displaying their handiwork, to gather at Washington St. & Ashley St. for a lighted street party with a beer tent, music, glowing puppets, wild and luminous costumes, movies & images projected on buildings and moonlit, shining sights. From dusk 'til midnight, people of all ages dance, play, and marvel at all of the illuminated art. This year’s theme is Metamor-FOOL-sis!

AADL always has a tent at FoolMoon and we’ll be hosting rousing games of Johann Sebastian Joust, an all ages, no-graphics, digitally enabled playground game using illuminated motion-sensitive controllers. Attendees can play with our lighted hula-hoops and other fun digital instruments and tools that can be checked out from the library. 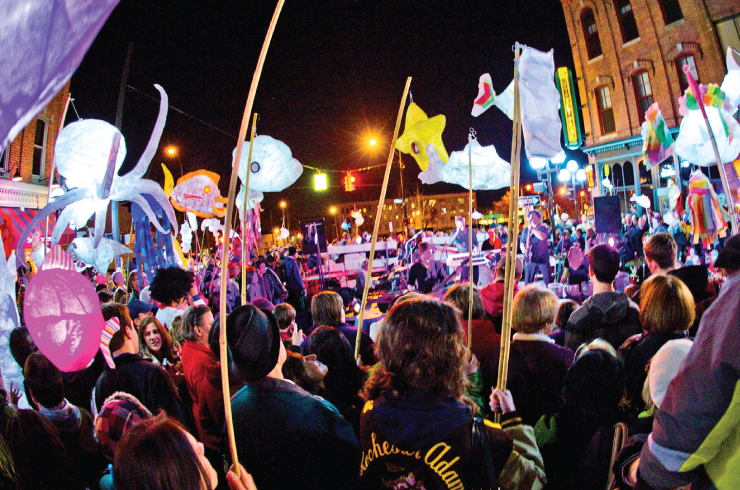 FoolMoon is always an illuminating experience!

Festifools is celebrating 10 years of foolishness this year with the annual event happening on Sunday from 4-5 pm on Main St. between William St. and Washington St. - parking is free on Sundays! This year’s theme is Rev-FOOL-ution! Community members and U-M students work for months to create the large, wild, colorful, and frequently topical papier-mâché puppets that will be marched, pranced, danced, and displayed during Festifools. In addition to the puppets there's music, joyful noise, drumming, and an enthusiastic crowd of all ages!

As has also become tradition, the library hosts an annual Robot Making event on Saturday, April 2 from 2-3:30 pm for families to come and make their own robot costume to wear and then march in during the Festifools parade on Sunday! 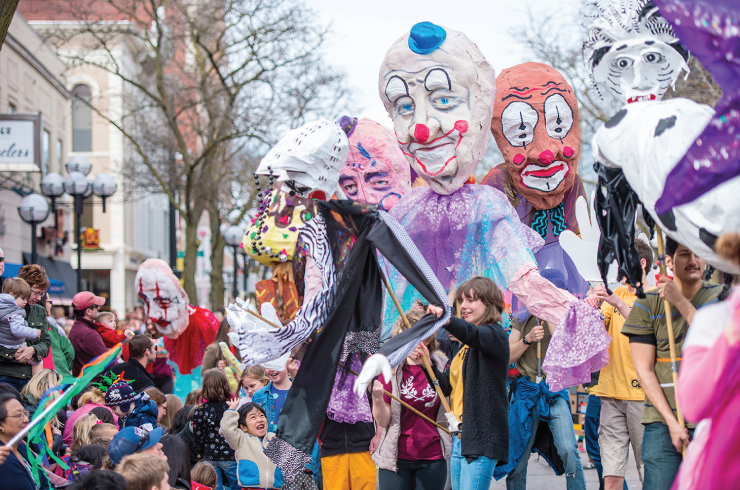 Festifools puppets and people engage in some good old-fashioned tomfoolery.

The origins of these special events start with Mark Tucker, Arts Director at the University of Michigan Lloyd Hall Scholars Program, who began his professional artistic career as Art Director for the Michigan Thanksgiving Parade. While in this role, Mark traveled to Europe to learn the fine art of cartapesta (papier mâché) from esteemed float builders in Viareggio, Italy. If you’re familiar with New York City's Superior Concept Monsters, then you may have an inkling of the FestiFools vibe.

Inspired by the magnificent, huge, bizarre, politically incorrect, human-powered, and fully animated floats, Mark decided to see if this kind of creative energy could find an audience back home.

Erin Helmrich is a librarian at AADL, and she'll be smothering her sadness at missing this year's festivities with margaritas in Mexico.