Review: Civic Theater goes barefoot in the park with laughs and a bit of romance 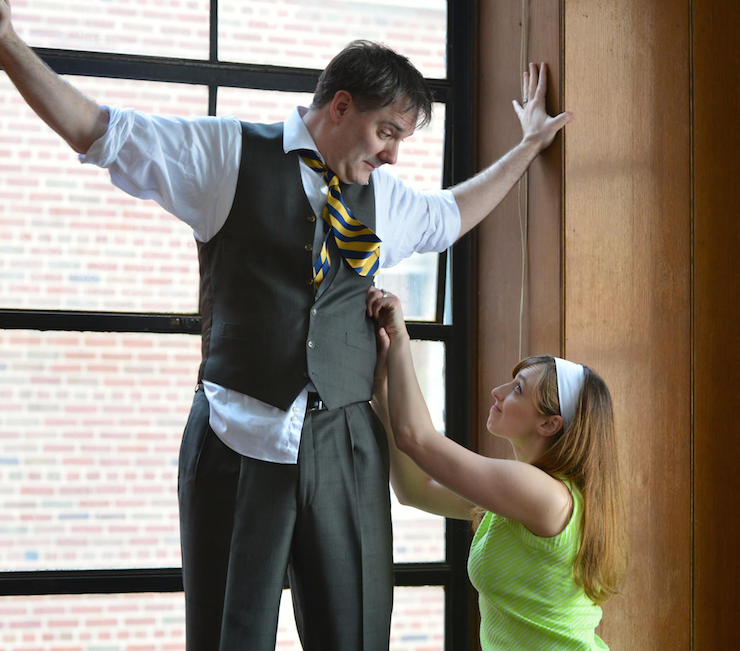 Colleen Davis's Corie tries to talk down Karl Kasischke's Paul in the A2CT production of Barefoot in the Park.

Barefoot in the Park was an early Neil Simon Broadway hit.

It had the bantering dialog, the sarcastic asides, and the frazzled New York setting of most of his plays. But it's a romantic comedy without the neurotic edge or the bitter insights into the stress of the big city of his later plays, nor the depth of character of his biographical plays. It has its funny and its pleasant moments, but it hasn't aged as well as his later plays, perhaps because anxiety is funnier.

The Ann Arbor Civic Theater is presenting Barefoot at the Arthur Miller Theatre on the University of Michigan north campus. Director Wendy Wright notes that the play is a sweet product of its time that isn’t often performed. She also notes that Simon, the most successful comedy playwright in Broadway history, is having a moment at regional theaters and it’s a good time to take another look at the play that really launched him into orbit on Broadway and on film.

The play is set squarely into its 1960s time period - in this production 1965, to be exact - to make use of a groovy Top 40 soundtrack of the times.

The play concerns newly-weds who are setting up their first "home" in a cramped, one-bedroom walk up apartment on Manhattan's east side. Corie Bratter is trying her best to feather this love nest for her lawyer husband after a six-day honeymoon at the Plaza Hotel. She's nervous about his reaction to their new home that he has yet to see. She's also nervous about the reaction of her perfectionist mother.

The apartment house has many eccentric tenants but the only one we see is a charming old flirt who lives in an even more cramped attic apartment.

Even when the play was new, the relations between men and women, especially in New York City, were already changing, as Simon's later plays would show. But here the tension is between a nervous stay-at-home wife and her striver husband. The focus is on Corie's attempts to match her tart-tongued mother with the sweet-talking old gentleman, Victor. She also wants to loosen up her conventional lawyer husband enough so he can "walk barefoot in the park," even in February.

Colleen Davis is bright and cheery as Corie. She sets the tone for the play, eager to please and increasingly upset when things don’t go as planned. She is appropriately charmed by the old rascal and sees him in contrast to her stolid husband.

Karl Kasischke as Paul is the more practical of the two. Comically he comes into his own at the end when he finally loosens up for Corie. This comes after an argument that could be a bit more sharply played. I think Simon was looking for a bit of a slamming-door farce in this scene. Things pick up when Kassischke’s Paul goes into a bit of inspired hysterics that is the valve release that Simon has been building toward.

Ellen Finch as Corie's mother Ethel gives an excellent performance. She gets the funniest lines and she handles them with authority - droll, biting, but really affectionate. She's charming.

Larry Rusinsky gets to overact as Victor Velasco, the character that is meant to be broad. He is someone for whom life is a stage. His scenes with Corie and her mother are amusing and silly in a 1950s comedy way.

Also amusing in a small role as telephone installer Harry Pepper is Theo Polley. He sounds like New York and he also has a fine sense of timing.

This is not top drawer Simon. Some of the jokes are too rooted in their time period and in this case don’t even acknowledge the changing world of young women at the time. It lacks the insecurity that would be at the heart of later Simon. But it does have something that would be rarer in later Simon plays with the exception of The Goodbye Girl: It has a romance and an affirmation that love conquers all.