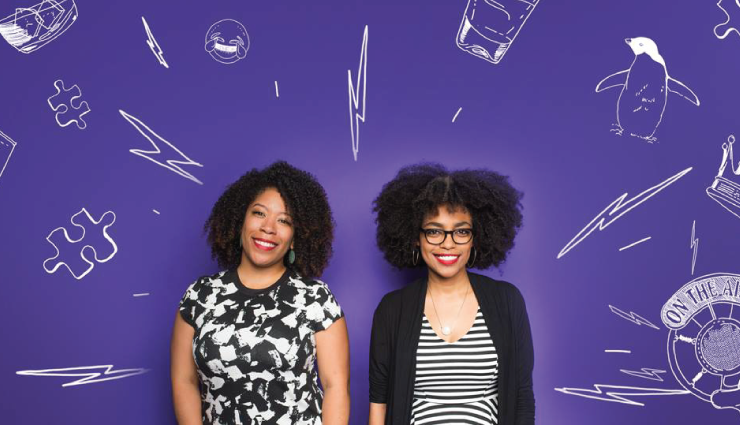 Tracy & Heben called for Another Round at the Michigan Union.

Hosted by the unbelievably sharp duo Tracy Clayton and Heben Nigatu, Another Round is a show featuring interviews with such amazing people as Ta-Nehisi Coates, Hillary Clinton, and Queen Latifah, among many others. However, the show is much more than just interviews. It's also chock full of brilliant critiques on race, gender, and politics, hilarious opinions on animals, amazing stories, live bourbon drinking, and advice about calling your mom. Thanks to U-M's School of Social Work People of Color Collective, the show was free and open to the entire public. Heben and Tracy performed to a packed audience that rightfully lost its mind when they showed up.

The show started with the segment “Tracy’s Animal Corner,” in which we learned how truly terrifying owls are. I'll admit to having a positive association with owls before this event, but I think I may have switched sides and now agree with Tracy that they probably are demon animals brought up from Hades. The second segment of the live show, “Is This Real Life?” generally addresses what truly abhorrent thing white folks have recently done. Luckily for the audience’s mood, this particular story leaned more towards hilarious than rage-inducing. And I learned from it that apparently most white folks don’t know about shea or cocoa butters, so get on that.

The guest interview was Flint musician Tunde Olaniran, who was smart and funny as he talked about music, belonging, choreography, and the Flint water crisis. He finished with an amazing performance that had everyone out of their seats and dancing. Despite all of the mega-celebrities that Heben and Tracy have interviewed, they treat all of their guests with the same respect and excitement, which was wonderful to witness in person.

I left the show feeling uplifted and inspired. As a white woman, this podcast and live show is not made for me, and that’s a good thing. It’s made for black people, and I feel lucky just to be able to listen in. Tracy and Heben had wonderful and moving advice about being confident for the young black women in the audience, and I saw a few people tear up amidst all of the laughter. As corny as it might sound, I felt honored to share the same space as Heben and Tracy even for just a few hours, and I could tell I wasn’t alone. Now go start listening to Another Round!

Evelyn Hollenshead is a Youth Librarian at AADL.