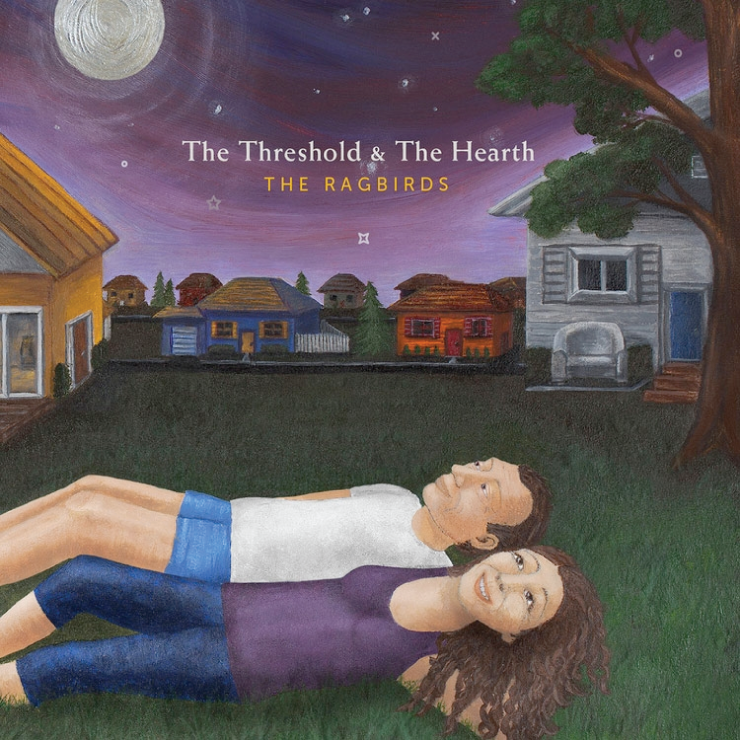 Today is a good time to begin listening to the Ragbirds' new album, The Threshold and the Hearth.

The easy sound byte about the Ragbirds’ new album, The Threshold and the Hearth, is that it’s the Ann Arbor folk band’s first release since band cofounders Erin Zindle and Randall Moore had their first child. One might expect more than a couple dewy-eyed reflections on new parenthood, if not an album full of them, but the Ragbirds seem to have their eyes set on bigger things. Structured as a loose concept album about the ups and downs of a fictional couple’s relationship, The Threshold and the Hearth is certainly informed by a newfound sense of wisdom and maturity, but it’s not obsessed with the personal particulars of Zindle and Moore’s very recently changed lives.

In fact, if you’re going to read anything too personal into the album, Zindle kicks things off by asserting her status as an inveterate musician, unchanged by the years. “I was born in a lemon grove with a fiddle / Not a stitch of clothes,” she sings in opening track “Lemon Grove,” naturally backed by a jaunty and immediately catchy plucked fiddle riff. The track builds beautifully, eventually incorporating a rollicking drumbeat, harmonies, and a fiddle solo. For those who know the band, the tune is classic Ragbirds: upbeat folk, in the sense that it features some acoustic, traditionally Appalachian instrumentation and because the music industry requires an easy genre tag for the sound. But otherwise it’s the wholly unique product of Zindle’s world-spanning blend of musical influences and her pop sensibility for a great hook.

Zindle stretches that sound even more as The Threshold and the Hearth goes on. “Cosmos,” with its charming lyric setting up the album’s central relationship between “a cosmologist and a cosmetologist drinking cosmos at the club,” has a funky little guitar and bass riff. “The Curse of Finger Pointing” makes lovely use of kalimba and some African-inspired percussion for a sound straight out of the Paul Simon playbook. And on “Strange Weather” Zindle quietly pours her heart out over a minor-key piano ballad.

This mélange of sounds highlights Zindle’s adaptability and adventurousness as a songwriter, and her lyrics display similar range. Over their decade in action, the Ragbirds have made their name on being mostly a feel-good kind of band, but Zindle contextualizes that positivity more on The Threshold and the Hearth. In “Good Time To Be Born,” Zindle crafts a nicely detailed interaction between a cynical man and a harried young woman in line at a grocery store checkout lane. With empathy for both her characters, she admits “There is always peace, there is always war” while asserting that “Today is a good time to be born / Today is a good time to begin.” And on “Sometimes Honestly” she sings, “I believe in optimism / Secretly I still expect the worst.”

The album’s most downbeat cut, the beautiful “Strange Weather,” chronicles the low point in the record’s central relationship. But even amongst doom-laden imagery, Zindle conjures hope. “If I build a fire to melt the frost / If you stop the winds before they gust / We can save our love before it’s lost / Before we become just rubble and dust,” she sings. The tune ends on an unexpected major chord. While she may be positive-minded, Zindle’s certainly not wearing rose-colored glasses. Her songwriting here reflects a thoughtful adult perspective on love and life that uses hope as a weapon to cut through the rough stuff.

Beyond the band’s songcraft, musicianship on The Threshold and the Hearth is excellent as well. Zindle’s dusky voice is expressive and engaging as ever, although it’s impossible to ignore the equivalent personality she puts across through her fiddle work. Zindle’s brother T.J. is also a standout here, lending warm, occasionally jazz-inflected guitar licks to songs like “Tough Love” and “On Your Side.” Bassist Dan Jones subtly lends weight to a few of the fiddle riffs, harmonizing with Zindle, and Jon Brown and Moore fill out the sound with a versatile complement of percussion.

The Threshold and the Hearth garnered a newfound national distribution push from the Ragbirds’ signing with Rock Ridge Music, and the band enlisted the producing talents of Grammy-nominated R.E.M. and Ryan Adams collaborator Jamie Candiloro for the record. Those decisions seem to have paid off well for the band, as The Threshold and the Hearth debuted at No. 20 on Billboard’s folk chart. And rightfully so. It’s a pleasure to see this band growing up and just getting better, stronger, and smarter with age.

Patrick Dunn is an Ann Arbor-based freelance writer whose work appears regularly in the Detroit News, the Ann Arbor Observer, and other local publications. He also believes in optimism, but secretly expects the worst.

The Threshold and the Hearth is now available in physical form at the Ragbirds’ online store and in digital form on major streaming services.