Review: Alejandro Escovedo at the Ark 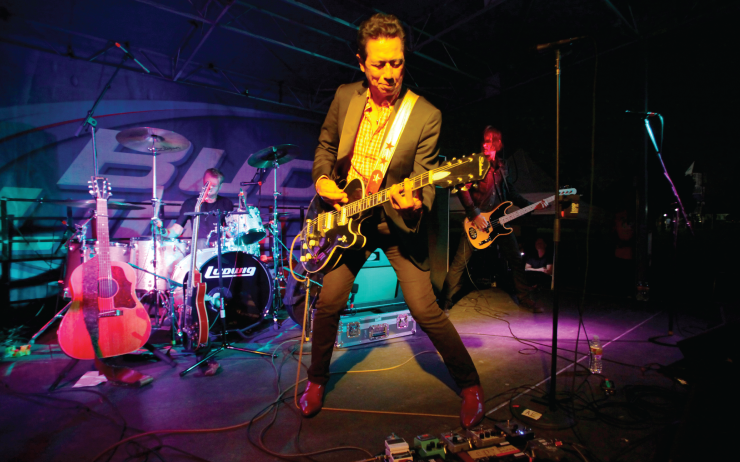 Alejandro Escovedo and his trio rocked the Ark last Wednesday.

Last Wednesday, singer/songwriter Alejandro Escovedo took to The Ark's stage, joined by his longtime cellist Brian Standefer and keyboardist/harmony singer Sean Giddings as the Alejandro Escovedo Trio. The trio’s performance was part of an ongoing tour to promote the vinyl reissues of his first two albums, 1992’s Gravity and 1994’s Thirteen Years, which were released on Record Store Day last month.

Escovedo likes sharing stories with his audience during his shows, and this show was no exception. He gave a shout-out to his early producer, Chuck Prophet, who he met while working at Waterloo Records and who shepherded him into the Austin music scene. He also shared the story of his young wife’s suicide many years ago, leaving him behind with two young children.

Then he opened the show with a plucky rendition of "Five Hearts Breaking." The cello brought a heartbeat-like sound to the music as a fine alternative to percussion. Next, they performed with rocking fervor Tom Waits’ "Bottom of the World." Jamming to the dark lyrics of "Sally was a Cop;" the singer said it “goes out to Trump”, to which the audience cheered. The poignant ballad, "Rosalie," Escovedo sang about the longing of two lovers separated by thousands of miles. This is a story Escovedo often shares; the two young almost-lovers meet while Rosalie is visiting her aunt in California and the young man so taken by her that he writes her letters everyday for years until they are able to be together again.

Next, they performed "Chelsea Hotel ’78" conjuring punky sounds and images from the Real Animal album released in 2008. The singer mentioned his earlier band, Rank and File which he aptly described as a George Jones & Clash mash-up.

At one point the singer said he was going to make “some Detroit-style noise” and started on some familiar notes to The Stooges’ “Wanna Be Your Dog”...but it was just a tease. Upon playing Sister Lost Soul, Escovedo spoke of the recent losses of David Bowie, Merle Haggard, and Prince. Sheila Escovedo, aka Sheila E., is the performer’s niece, so the loss of Prince was a personal family one.

Escovedo performed 11 songs total with one encore: the rocking "Castanets." To top it all off, he told the backstory of that tune, divulging who it was that he "likes better when she walks away." The night was full of rocking music and great stories and, despite a fairly mellow audience, both Escovedo and his special guest Lucette couldn’t say enough great things about the gem that is the Ark in Ann Arbor.

Beth Manuel is a Library Technician at the Ann Arbor District Library and one of her favorite Alejandro songs is Velvet Guitar.